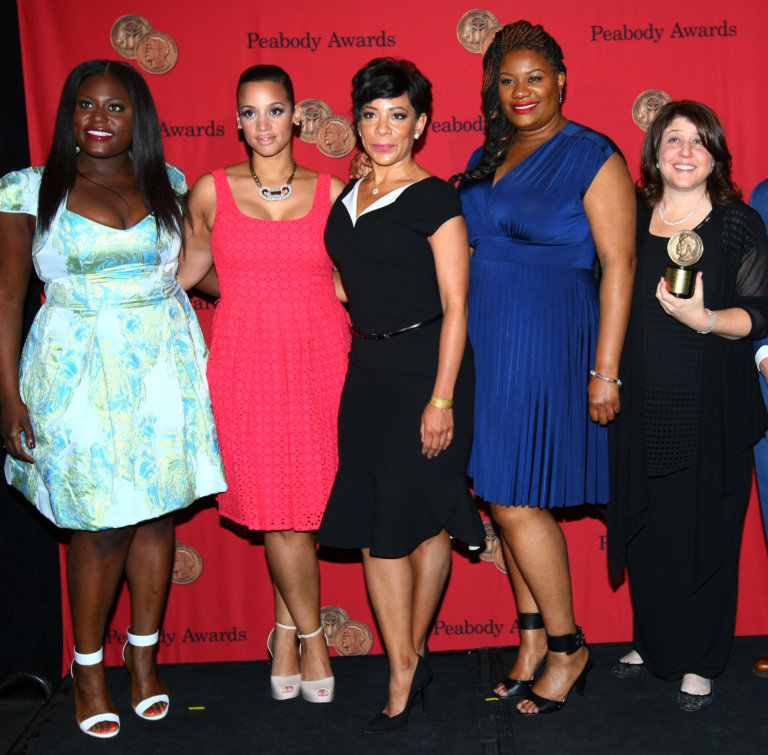 How Netflix is leading the way with feminist TV The beautiful dead woman. The ditzy love interest. The ‘sassy’ black friend. We live in a time where we are still inundated with the same, stale female stereotypes on TV. Thank goodness that Netflix, at least, is making the world a more feminist place one show at a time.

We know television plays a pivotal role in perpetuating our views on gender and a 2015 BBC report entitled Blurred Lines: Contemporary Attitudes to Gender Portrayal in the Media revealed that not only do men still outnumber women on TV across Europe by 2:1, but there is a significant lack of older women, BAME women and indeed ‘normal’ women – both in terms of appearance and of the lives they’re portrayed as leading – in the shows we watch. There is also a disproportionate focus on how female characters look over their ability and achievements, as well as a notable reliance on clichéd gender stereotypes.

But since Netflix’s first original series House of Cards debuted in 2013, the streaming company has led the charge against this by commissioning shows which challenge gender norms and traditional female narratives. It even has a “Films with a Strong Female Lead” category which, although in an ideal world would be entirely redundant, shows a clear effort to appeal to a more inclusive market.

Whether it’s the female-fronted superhero show Jessica Jones, or comedy Grace and Frankie with older women in the lead roles, Netflix is presenting women beyond the unsatisfying roles they are often pigeonholed into and giving visibility to those women who hardly make it on screen at all.

I spoke with writer and brand strategist, Arwa Mahdawi over e-mail, who argues that this is partly due to the company’s shift from content distributor to content creator.

“It’s taking on the networks and studios head-on. Netflix as a content creator is interesting because its content is hugely data-driven. It doesn’t make pilots, it looks at insights from viewing patterns from past shows,” she says. “It’s digital-first and so it has rewritten the rules of how we watch TV. It has always catered to a younger audience.”

In her famous TED talk, novelist Chimamanda Ngozi Adichie rightly said, “We raise girls to be competitors not for jobs or accomplishments, which I think can be a good thing, but for the attention of men.”

Claire Underwood is an exception, however. The ruthless First Lady in Netflix’s firstborn, House of Cards, is willing to do whatever it takes to get to the Oval Office. It’s such a rare treat to see women on TV who are as unapologetically ambitious as men, and throughout the series Claire is doggedly pursuing her goals and outmanoeuvring the men around her.

She is also purposefully childless; a perfectly normal decision for many women, but something which we rarely see addressed explicitly on TV. In the most recent series, wannabe First Lady Hannah Conway says to Claire, “Do you regret not having children?” to which Claire replies, “Do you regret having them?”

This comeback makes for brilliant TV of course, but also touches on a very real cultural taboo. Women are still judged and outright derided for choosing not to become mothers, and expressing regret at becoming a mother can lead to abuse, such as that which Isabella Dunton received when she wrote on the subject for The Daily Mail in 2013.

Aside from the obvious influence of programmes like these over the hearts and minds of the binge-watching community, one of the benefits of Netflix is that it is contributing to real-life progress for women

Tina Fey’s sitcom Unbreakable Kimmy Schmidt has been another runaway success for Netflix. The show revolves around Kimmy, an unfailing optimist who moves to New York after having been held captive in a bunker by a doomsday cult-leader for 15 years. This is a show littered with Fey-esque feminist moments, such as in the first episode in which Kimmy and her cult sisters are interviewed on TV. One woman says she followed the cult leader underground simply because he asked her to, and the TV show hosts replies pointedly, “I’m always amazed at what women will do because they’re afraid of being rude.”

But is it really Kimmy’s determination throughout the series to be recognised as something other than a victim (or “mole woman”) – an extremely common female experience – the reason why the show has been hailed by some as the feminist show we’ve all been waiting for?

While a male writer trying to articulate the female experience is never going to be perfect, Aziz Ansari’s Master of None makes a pretty good go of it, tackling the everyday sexism and racism that women and men face. His observations on the superficial way in which heterosexual men can treat women are spot-on, and the episode which chronicles the difference between a women’s experience of walking home at night and a man’s is chillingly accurate. The show has also given us Lena Waithe’s Denise: a black lesbian who does so much more than fulfil the ‘token black friend’ role.

Aside from the obvious influence of programmes like these over the hearts and minds of the binge-watching community, one of the benefits of Netflix is that it is contributing to real-life progress for women. House of Cards actor Robin Wright further highlighted the equal pay battle by demanding equal pay to her co-star Kevin Spacey (which she received). Orange is the New Black’s break-out star Laverne Cox has become a trailblazer for the transgender community and, among her many accomplishments, she has made history by being the first openly transgender woman to be nominated for an Emmy award and to appear on the cover of Time magazine.

In fact, the mere existence of Netflix as a company has helped the feminist cause. Last year, the company announced that new parents could take as much time as they needed off during the first year after their child’s birth.

But the struggle is by no means over. We may be in a new era of feminist TV and Netflix is a massive part of that. However, mainstream feminism all too often lacks intersectionality; the recognition that for certain groups of women, gender is not the only system of oppression.

White, non-disabled, middle-class, cis-gendered feminism finds its way into the shows we watch. Huffington Post writer Zeba Blay put it well when she said, “If white feminism is that feminism that isn’t intersectional, then white feminist TV is television that filters the world through the prism of the white female experience in a way that suggests it is not just an experience, but the only experience.”

So, while Unbreakable Kimmy Schmidt certainly deserves praise for its “Females are strong as hell” mantra, it also deserves the valid criticism it has received for its treatment of race, particularly its Native American storyline where the very white Jaqueline Voorhees (Jane Krakowski) reveals her Native American heritage.

Privileged white women have definitely seen enough women like themselves on TV, and this is where programmes like Orange is the New Black come in. A considerable spectrum of sexuality, age, race, size and gender expression are on display, and the upper middle class, white Piper is by far the least interesting of all the female characters. Creator Jenji Kohan has often talked about how Piper – a skinny, rich, white Brooklyn-ite – is a “Trojan horse” for luring an audience into the prison so she can tell the real story: the lives of a diverse set of women.

A more feminist world is an uphill struggle, and the commissioning choices of one company will not solve everything. But the success of these shows proves that the risk Netflix has supposedly taken isn’t really a risk at all. As a society, we have proved we are eager to see more TV like this, with more complicated, daring, diverse women at the forefront.

Mahdawi agrees: “I’m not saying that Netflix is perfect, but it definitely represents a greater respect and understanding of who is actually watching its shows – i.e. not just white men – and catering to that market.”

[Image is a photograph of some cast and crew members from Orange is the New Black, taken at the Peabody Awards in 2014. Featured are Danielle Brooks, Dascha Polanco, Selenis Leyva, Adrienne C. Moore, Lisa Vinnecour, Neri Tannenbaum and Natasha Lyonn; a vareity of black, white and hispanic women, both fat and thin, ranging from young to middle-aged. All the women are dressed glamorously and are smiling for the camera. This photograph belongs to Peabody Awards, was found on Flickr and is used under a Creative Commons License.]