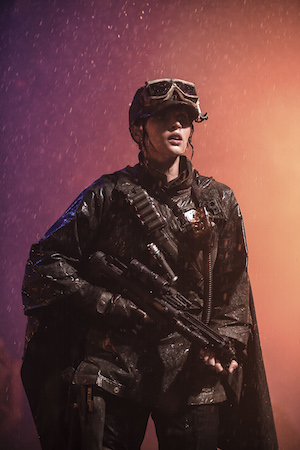 Ngaire Ruth is thrilled about the latest Star Wars instalment, and especially about Jyn Erso, the woman at its heart Yes, the protagonist is female, and this time she is not a girl, as in last year’s The Force Awakens, but a grown-up woman. That particular heroine (Rey played by Daisy Ridley) was a game changer for the franchise, but Rogue One pushes the envelop further, giving top billing to the character Jyn Erso, played by Felicity Jones, who finds purpose in joining the Resistance and leading the quest to victory in this spectacular.

Rogue One is promoted as a stand-alone movie in the series but it is, in fact, the prologue to the very first Star Wars, released in 1977: a factor which makes for a canny twist to its ending. The film serves as a bridge between the 2005 Revenge Of The Sith (Episode III) and that first groundbreaking release (Episode IV).

It’s radical and overdue for a company like Disney, with its reputation for basic female stereotypes wearing gender-specific colour-coded outfits that you can’t run in (you’d definitely lose a shoe), to produce characters such as Rey, Maz Kanata (the female Yoda in The Force Awakens) and Jyn. According to the introductory speaker at the UK media London preview I attended, Disney is on a journey and they thank us for being part of it.

In the final battle, the Resistance pilots are equal-ish proportion women to men; camaraderie and mutual goals are the glue in these relationships, never romance

But it’s good to be cautious. It’s only now the mainstream film industry has caught on to the fact that women protagonists sell, a factor that ensured fair pay for the relatively unknown Felicity Jones, for which she has publicly thanked trailblazers Jennifer Lawrence and Patricia Arquette. And look at the promotional image: the enormous face of Jyn, gazing passively into the distance, surrounded by a squad of men, with weapons, ready for action, with Cassian Andor (played by Diego Luna), Jyn’s closest ally in the journey, fulfilling the role played by Han Solo, complete with non-human sidekick, the android K-2SO.

It suggests a narrative based around well-developed characters of heroic men and one stereotypical super-smart, driven woman who has been let into the sacred men’s clan, and reflecting the real life scenario of the woman who ‘made it’, and can’t hear all the other women shouting to be let in. Will it end in romance? Thankfully, no. How refreshing for Felicity Jones to be able to play a character for who romantic relations couldn’t be further from her mind. This may be a space fantasy with a simple plot, but Rogue One has a more authentic representation of women on the screen, beyond the main characters. Their screen time is brief, unlike Jyn’s feisty squad, but mostly because it’s all about space horizons, space ships, space aliens, outfits and battles in space. In the final battle, the Resistance pilots are equal-ish proportion women to men; camaraderie and mutual goals are the glue in these relationships, never romance.

Around the counsel table of the Resistance, Sharon Duncan-Brewster as Senator Pamlo, a counsel member, opens the scene and the discussion. The leading Senator, and final decision-maker, is also a woman, Mon Mothma (Genevieve O’Reilly). Jyn gets the opportunity to make two rousing speeches to boot – in make-up free face and non-hairstyle that rings true for a displaced woman who lives so dangerously.

How can female characters relate to the historical context of the imagined saga, when previous films have habitually marginalised its women characters?

Director Gareth Edwards and his team don’t miss a thing: even down to the dirt under the nails of Jyn, as she holds her dying father’s head in her hands after a drawn out, wholesale destruction of the Imperial base, when a small group of the Resistance break orders to join her in stealing blueprints for the lethal weapon that destroys whole planets, the Death Star.

“We didn’t want to sexualize Jyn… We don’t even see Jyn’s arms!” Felicity Jones told Glamour magazine. “She’s a survivor, and she has a mission to complete.” Jyn’s backstory, a proper herstory, is pivotal to the plot, most specifically an event in her childhood. It’s the film’s opening scene, but the adventure really begins 15 years later, making sense of all that has gone before.

It’s an interesting feminist pointer. How can female characters relate to the historical context of the imagined saga, when previous films, bar the last, have habitually marginalised its women characters? Rogue One gets closer to answering those questions. One day Lyn’s young life is shattered when the evil Orson Krennic (Ben Mendelsohn) arrives to take her father, under duress, to work as a scientist for the Imperial forces.

“Whatever I do, I do to protect you,” whispers her father as he waves her off into the deserted terrain to fend for herself as the intruders loom closer to the family dwelling. But not before she sees her own mother, Lyra, emerge from behind a sand dune to gun down the intruders, and get shot and killed in doing so.

“You know where to go don’t you? Trust The Force.” Let’s not get too excited. There’s still the predictable subtext, that a woman can only be motivator and maker of meaning when defined by a man who bequeaths her to do so. More than once there’s reference to her being the daughter of Galen (Mads Mikkelson). He is seen as traitor to the Resistance, because he helped build the Death Star, but also as the saviour, with the script referring to him sacrificing himself for the cause.

He includes a hidden weakness in the Death Star’s design which will destroy it and convinces a disillusioned pilot (played by Riz Ahmed) to betray the Imperial forces and defect to the Resistance outpost, carrying a message in hologram form. It’s one of the many nods to the first Star Wars movie, along with the sight of droids C-3PO and R2-D2 as observers in a passing landscape, and the reappearance of Darth Vader, seen near the end for a fleeting killing spree or ten. Inevitably, circumstances lead to Jyn becoming the receiver of this message, and the pilot joins her mission to convince the Resistance to help.

Rogue One is the most thrilling chapter of the saga since The Empire Strikes Back. Never mind the mind-bending settings of starlit nights, floating planets and trashed landscapes, nor K-2SO, voiced by Alan Tudyk (Wreck-It Ralph, Frozen), with a speciality in witty backchat and a social skills problem, which will endear young and old. The Christmas treat is fun and exciting thanks to the character of Jyn, the believable yet reluctant heroine.

Ngaire Ruth used to write for the music weekly Melody Maker and more recently worked as live editor at www.thegirlsare.com. She writes reviews, opinions and essays with a feminist agenda, relating to her interests in music and film and with a view to championing women in the creative arts. She vaguely keeps a blog, as well as writes poems and short stories, which she sometimes performs, and teaches market analysis, feminist and music theory at the UCA. Find her on Twitter @NgaireRuth