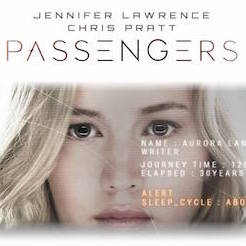 Don’t wake me up before you go-go

This review reveals plot twists so please don’t read if you’re planning to see the film!

Arguably one of the problems with Passengers, the recent film by Morten Tyldum, is the way it’s been advertised as a romantic thriller in space. The official trailer suggests the two protagonists have suffered the same fate, waking up early on a spaceship through some unexplained malfunction, rather than the astonishingly unapologetic sexist nightmare that ensues. The film begins with the spaceship Avalon ploughing through a meteor field. We witness a direct hit from a larger than expected iceberg, I mean meteor, which damages the ship in a number of locations. One of these is the hibernation pod housing Jim Preston (played by Chris Pratt), a mechanic and engineer, and he is roused from the suspended animation required to get through the 120-year journey to Homestead II, the new planet created as an alternative to living on Earth, this new colony world. Woozy from sleep and drugs, Jim doesn’t initially notice that he’s the only one being shown to a cabin. The Avalon’s hologram assistants only have one script: passengers are woken up four months from their destination to enjoy the luxury cruise ship, prepare for colonial living and meet their fellow passengers. So that must be what’s happening, thinks Jim. Right?

He showers and only has a basic breakfast: because he’s working class, he has the cheapest ticket on the ship and his wristband only gets him a solid block of porridge and a standard coffee. When no-one else shows up to the introductory talk, it dawns on him that something is amiss. Such was the certainty of the infallibility of the ship’s construction that there’s no way for Jim to get back to sleep. He tries to contact Earth but it will take 55 years to send and receive a message, and he cannot get through the door to break into the crew pods to see if they can help. His only companion is Arthur (Michael Sheen), the android barman with whom he spends a good deal of time drinking a good deal of whisky. After a year, the delights of a personal cinema, dance computer games and solo basketball begin to pall, so he starts thinking about suicide. This descent into desperation is given a very light touch. We know he’s desperate because he grows a beard, walks around naked and squeezes (literally) a tear out at the existential horror facing him during his space-suited walk along the outside of the ship. Luckily, a drunken tumble after his near suicidal brush with space, near another hibernation pod, introduces him to sleeping beauty Aurora (played by Jennifer Lawrence).

Jim kicks into creepy stalker mode: getting himself (how?) into the ship’s database, discovering she’s a Gold Card Passenger (i.e. rich and upper-class to his working class) and watching all the videos that Aurora has made of herself (why?), laughing uproariously at her not particularly funny jokes and generally deciding that she is The Perfect Woman. Jim puts in a small effort to resist what he is obviously going to do. He has protracted discussions about whether he should or should not wake her up with Android Arthur – who has already pointed out ethical dilemmas of this level are “not robot questions”. When he eventually wakes her up, he does it not with a kiss but by breaking her hibernation pod with a sizeable tool box and big drill bits. For a little while, he’s able to pretend this was also the effect of a malfunction until Arthur the Android drops him in it on the very night he was going to propose.

Aurora’s furious grief as she realises her future is gone is more than understandable. What is most telling though is that Jim’s behaviour is not critiqued in the film; instead, it’s Aurora’s rage that is underlined as excessive, and her distress is dismissed. When the malfunctioning problem that woke Jim worsens, a crew member played by Lawrence Fishburne is woken up just as Jim was (as a heavy-handed plot device). Aurora points out that what Jim has done is basically murder – but Fishburne first resists “getting involved” and then suggests that as Jim was a drowning man, it was an understandable move on his part to wake her, as “drowning men drown other people”.

Perhaps the worst thing about the film is actually its 12 rating. There were a lot of kids in the cinema the night I went, watching a deeply unpleasant film about the masculine sense of entitlement to usurp the agency of women

Basically, you need to just get over it, Aurora. And to my dismay, even though I knew it would happen, get over it she does. In the face of the film’s “mild jeopardy/brief nudity” (that gives it a 12 rating), her rage gives way to an emotional dependence on Jim, to the extent that she puts herself at risk to rescue him and rejects the opportunity to go back into hibernation. Perhaps the worst thing about the film is actually that 12 rating. There were a lot of kids in the cinema the night I went, watching a deeply unpleasant film about the masculine sense of entitlement to usurp the agency of women. Despite the severity of Aurora’s rage—women in film don’t often get to experience anger on this level—it is momentary and easily upended. Aurora refuses to listen to Jim’s attempts to explain what he did, leaving the room whenever he tries to talk to her about it. So of course, he overrides the tannoy system and forces her to listen to him as she runs through the ship. Her repeated screams of “I don’t care!” are ignored both by Jim and the filmmakers.

Aurora is a puppet to the masculine stories throughout Passengers. Before she got on the Avalon, her narratives were captured in print by her Pulitzer-winning father. Her abandonment of what looks like a happy life on Earth is down to wanting to live as her father did: she is chasing his story. Of course, what she ‘really’ needs is less to live his life, and more to get herself a replacement patriarch. One videoed memory from her best friend indicates what is really ‘wrong’ with her. She needs a man and to drop her barriers and let him in. Any interesting narrative Aurora had to experience or to write herself has been reduced, along with her horizons, to the trajectory of the journey and a view of Jim’s face.

Any opportunities for nuance are rejected. When early in the film Aurora starts a considered discussion around the long term financial motivation of the company who runs the Homestead planets and ships, trapping settlers into a life of financial debt, Jim quickly derails this trajectory by suggesting Aurora’s attitude is cynical and she’s not as hot a reporter as she makes out. There could have been an interesting film here about ethics, which would have taken those “non-robot questions” onwards but it falls into action thriller mode instead. Whilst Jim’s agency has been taken from him by misfortune, at the end of the day he personally removes Aurora’s.

Beyond the basic toxic masculinity storyline (white boy deserves whatever he wants at whatever cost) the film is also fairly derivative – with concepts from at least four films present. You can probably find more if you put your mind to it. First up, as I’ve hinted already, is Titanic (over-confidence in the unsinkability of a ship due to sink; blue-collar boy falls for affluent golden goddess; a ship that the audience know is facing some serious future issue). Next, there is Castaway (robot standing in for basketball, but the beard and sobbing mania are the same – although Jim falls to pieces a lot sooner than Tom Hanks) and Sleeping Beauty (glass pod, she’s even called Aurora for goodness sake). And when Jim walks first into the bar with Michael Sheen playing the android barman, menacingly polishing a glass, we’re suddenly deep in a robotic version of The Shining. I was fervently hoping by the time the ship got to Homestead II, we might be able to include Alien 5.

You can read about a more optimistic take on women in space – Alexandra Orlando recently reviewed Arrival for The F-Word.

Image description
Both images taken from @SonyPicturesUK official FB page; all rights reserved.
1. A mid shot of a white man and a white woman, looking at each other while standing next to a machine that looks like an advanced tanning bed, in a room looking like a lab. A man has stubble and is touching woman’s shoulder length blonde hair, seeming emotional. She is looking at him as if she wanted to ask something. They are Chris Pratt as Jim and Jennifer Lawrence as Aurora.

2. A modified film poster, with a close-up of a face of a white woman with blonde hair, right half of which face is slightly matted. The lettering on top: Jennifer Lawrence Chris Pratt Passengers and at the bottom: In cinemas 21 December. The lettering on the right side of woman’s face: Name: Aurora Lane Writer Journey Time: 120 years Elapsed: 30 years Alert Sleep_Cycle: Aborted.