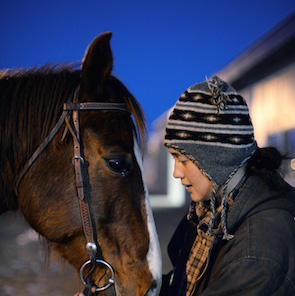 Kelly Reichardt’s Certain Women opens with a view of a wide horizon, a circle of mountains and a train moving inexorably towards us. It is such a long train, with so many cars, that from this point it is impossible to see the end. I want to watch it go fully past, as I’m immediately bought into the languid feeling this film is setting out. I’m disappointed though, as despite a long shot, the camera eventually moves elsewhere. As the shot pans over the industrial buildings that make up Livingston, the town in the lost wilds of the US, a horn sounds, the endless train is still travelling through. The tone is set for a film of vignettes, of stories and lives threading back and forth, with any connection that might take place being momentary.

The film, adapted from short stories by American writer Maile Meloy, is made up of three key stories that glance off each other rather than intertwining. Each story has a central woman protagonist. The first involves lawyer Laura Wells (Laura Dern) whose client (a local man Fuller, played by Jared Harris) is embroiled in a workplace accident case. The second depicts Gina (Michelle Williams) building a house in the countryside outside of Livingston. The third story focuses on The Rancher (Lily Gladstone), living a solitary life in Belfry, a four-hour drive away. One night she goes to a night class on a whim and becomes fascinated by Elizabeth (Kristen Stewart), a recently graduated lawyer from Livingston, trying to make ends meet by driving out to Belfry to teach. The overlap in these stories is not the focus, yet it does exist. Laura is having an affair with Gina’s husband and at some point The Rancher comes to Laura’s Livingston office, searching for Elizabeth.

The film is giving us permission to not rush to the story: seeing the detail is the point

Just as overlaps are not pursued, connections in this film are never quite completed. Even during conversations, the focus of the camera is often on one character, not jumping back and forth between the speakers but instead lingering on one face. This is used to a beautiful effect when the camera keeps a steady gaze on Gina’s husband Ryan (James LeGros) as he reverses out of the drive of the plot of their planned build, asking their daughter to give her mother a break, acknowledging his own failures as a husband as he does so – failures we the audience have already been introduced to. Similarly, in an earlier post-coital bedroom scene between Ryan and Laura the paucity of dialogue is balanced by focussing on just one of their faces, as they silently communicate with smiles and eyes. This produces a feeling that, as viewers, we can afford time to get to know these characters. The film is giving us permission to not rush to the story: seeing the detail is the point.

We witness the day-to-day events that happen to the three women. Dealing with a troubled client, Laura feels responsible for him even as she endeavours to retain distance from his petulant demands. Gina is struggling to get her husband to take responsibility for their relationship, their daughter and the pile of sandstone they need to acquire from a difficult old man in the area. The Rancher is compelled to drive through the night from her little town to Livingston when she realises that otherwise she’ll never see Elizabeth again.

These women appear to be fine in being alone. They might not have chosen it but there is evidence they savour it

There is actually enough drama in the film for a few scripts, but sometimes big events happen on the periphery of life. There’s an armed hostage situation, an affair, an impulsive response to a stranger ending with a car crash, and yet none of these things seem to change the course of the film or the lives of its protagonists. There is such beauty in simplicity here: the repetition in the life of Lily Gladstone’s Rancher, in the daily feeding of the horses, putting them out in fields with the fat corgi running after her quad bike or when Laura is forced at half-hearted gunpoint by Fuller to read out the correspondence with his previous employers. Michelle Williams is a study in irritation with her character’s husband undermining her position and aims, but when she is alone, surreptitiously smoking, the irritation is gone and she is visibly soothed by the landscape and the solitude. This is a significant point about the film. These women appear to be fine in being alone. They might not have chosen it but there is evidence they savour it. Laura stretches out dreamily at the end of the day, her toes stroking her Labrador lying at the other end of the sofa. Gina sits with her wine and her cigarette, away from the party on their plot, happy at her victory with the stone that will form a wall in her future home. The Rancher is the most visibly alone, her routines with the horses moving with the regularity of dance steps and just as fluid. It is hard to imagine she could enjoy so much solitude, and her joining the night class and her confession “I don’t know anyone” hint at loneliness. However, her connection with the young harried teacher Elizabeth isn’t one that demands anything. She takes as much enjoyment from watching Elizabeth eat as she does from riding with her through the cold night to the diner. Although she is obviously pained when Elizabeth breaks the connection by quitting her job, her wish is to simply see Elizabeth one last time; she isn’t trying to force her into a continued engagement.

Brief connections fuel this film. Laura visits the hapless Fuller in prison with milkshakes. Gina whistles in response to the old man’s poem to the birds in his field; this is a local rhyme she’ll take away with her, along with the stones. These women might not be happy, but they’re not tragic. There’s curiosity, love and kindness in their responses to these dramas.

It is a film about connection despite failures in communication, about the nuanced way of living when you savour the small details

The landscape that surrounds the town of Livingston might have something to do with this comfort in solitude and the lack of reaction to small dramas. The nature is impressive and to live against it might be a constant reminder of how small we all are. As director Kelly Reichardt suggests: “There are mountains on all sides of you…and I think that really changes the way you might look at the world.” If there’s a criticism to be given, it is around the somewhat confusing portrayal of the only non-white character, The Rancher. Some online reviews identify the character as “Jamie” and a couple mention the fact that in Meloy’s short story this character was a man called Chet. Others refer to Gladstone’s character as “the unnamed ranch hand.” Perhaps different information was distributed at earlier screenings/festivals. If the character had a name in the book – why was it changed to an anonymous character for the credits? In the press pack I was given in London in January 2017, she is simply “The Rancher” and when I checked press notes for her name, I was disappointed that she was a type. If all the women had been labelled (i.e. “The Lawyer”, “The Builder”, etc.), it would have tipped a nod to the German playwright Bertolt Brecht and his device of using generic types, which would have been interesting. There were other aspects that made me worry there was a particular kind of stereotyping going on – the Native American Rancher’s silent stoicism and her immediate fascination for a white woman. I am, of course, a white Londoner so unable to comment fully on this. After a rather quick scan of some of the reviews published to date I couldn’t find any that flag this issue of racial stereotyping; so I really hope that there might be some culturally specific reviewing to come.

Despite this discomfort, I was absolutely entranced with this film from the start. It had a hypnotic quality and if it had been double the time, I would have been no less fixated. In fact, at times I wished some of the more elegiac moments of simple beauty were extended. When Laura is reading out the correspondence about Fuller, I felt like I could have listened to her all night. It is a film about connection despite failures in communication, about the nuanced way of living when you savour the small details.

All pictures courtesy of Park Circus and Sony Pictures

1. A white middle-aged woman in the study/office, some wooden shelves with books on in the background. She has long fair hair and a long coat, unbuttoned, as if she just got into the room. Her mouth is ajar, she might be talking to someone. It’s Laura Dern as Laura.

2. A white woman with dyed blonde hair in a short ponytail is standing outdoor, there’s dry yellowish grass on the ground and a tree behind her. She’s wearing black leggings and a navy blue sports jacket, with her hands in her pockets, looking to the left. It’s Michelle Williams as Gina.

3.A Native American woman wearing a heavy coat and a knitted earflap hat is standing outside against blue sky, holding a horse by its bridle. It’s Lily Gladstone as The Rancher.

4. A white woman with short brown hair, in a room that may be a classroom as there’s a blurred map on the wall in the background. She looks tired. She is wearing long sleeved cream shirt and a yellow knitted vest over it. It’s Kristen Stewart as Elizabeth.