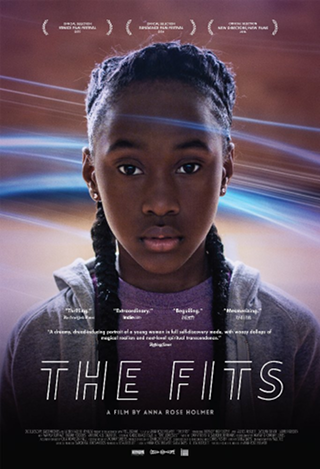 This review reveals the plot of The Fits

The Fits (directed and written by Anna Rose Holmer) focuses on the journey of Toni (Royalty Hightower), an 11-year-old navigating her way from childhood to pre-pubescence. The story bears some similarity to the plot of Carol Morley’s 2014 film The Falling, as both focus on a group of girls experiencing mysterious fainting spells or fits. Whereas The Falling tells the story of white middle class British girls in a boarding school in the 1960s, The Fits focuses on black teenage girls from an after-school dance club in Cincinnati’s West End.

So many reviews of The Fits reference The Falling that I started watching it. I stopped at the opening shots alone (bucolic British countryside, a sinister folk sound track and a voiceover of an English poem) as they stood in such sharp contrast to the mesmerising, dreamlike beauty of The Fits that I didn’t want to lose my focus on Toni’s journey. In addition, comparing The Falling, informed by British class and British whiteness, to this American hymn to black girlhood felt jarring, regardless of the similarity of one aspect of the plot. I felt uncomfortable about the implication in some reviews that The Fits was “copying” The Falling, particularly after I read Mark Kermode’s glowing review of The Falling in which he references the Le Roy real-life event from 2011 where strange fits affected teenage girls connected to a cheerleading troupe in New York. This real life event bears more similarity to the plot of The Fits than The Falling.

Toni hangs out at the boxing gym in a local community centre with her older brother Jermaine (Da’Sean Minor). She is the only girl there, devotedly engaged in exactly the same exercises as the boys. She grimaces through sit ups and pulls ups with her tightly toned little body showing muscles that are the result of her dedication. She shadowboxes with her brother, runs over a railway bridge with him; a determined focus to how she approaches her training with him. Toni is devoted to her brother, and he to her. He watches her growing fascination with the all-girl dance troupe that rehearse across the hall from the boxing gym: how she leans against the door, peering in through the window, how she tries out dance steps she’s seen in the empty sports halls after practice and it is Jermaine who gently suggests she should try out for the troupe.

She gets into the troupe and finds new friends in fellow newbies Beezy (Alexis Neblett) and Maia (Lauren Gibson). Beezy connects with Toni effortlessly, casually offering her sweets within a minute of sitting next to her at try-out. They race around with an easy camaraderie, whilst all around them confusing engagements take place – particularly between the older boys and the dance captains, Karisma (Inayah Rodgers) and Legs (Makyla Burnam).

The three girls, in giggly collaboration, try on the stereotypical constructs of femininity, painting their nails and helping Toni to pierce her own ears. As Toni moves into this new stage of her life, her relationship with the boys in the boxing gym shifts, and her experiments with girlhood begin to take centre stage. Jermaine explodes in disgust when he sees her pierced ears, and another boy begins to fall into his usual routine of teasing girls, which Toni upends when she punches him expertly in the stomach. Toni is not often the instigator of these ‘girlish’ experiments and it often seems she is reluctant to be marked or branded as she later violently picks off her nail polish and painfully takes the earrings out of her newly pierced ears. The film beautifully highlights the difficultly of performing gender at a young age and the peer pressure to conform to gender stereotypical behaviour.

Toni’s world is on the cusp, a space of liminality between childhood and teenager spaces. Rather than the journey of child to adult, this is a space in-between. Adults in fact are relatively absent in this film. Toni’s mother is only referenced in passing, making the dance coach and the school counsellor the only adults visible and with speaking roles.

Against this change in Toni’s life, a second drama begins to play out. During one rehearsal, Legs falls to the floor in a violent fit. Then within days Karisma also has a fit, but her fit is different, elongated, as if in slow motion. This time, the dance troupe do not immediately run for help, instead their phones flash out to capture the event. More girls follow suit, each of them experiencing their fit in subtly different ways. They take to discussing the differences and the similarities in corners. Toni finds herself increasingly on the outside as even Beezy and Maia each have a fit. This explosion of girls collapsing leads to an upcoming dance competition being cancelled. The phenomenon is picked up by the local news (with more similarities here to the Le Roy news piece than to the aesthetics of The Falling), with the supposition that it must be something to do with the water supply. “But the boys haven’t had any fits”, notes Toni, suspiciously.

What appears to be at stake in all of this is a performance of belonging. Toni’s access to any of these group appears to be dependent on getting things right: pulls ups, nail varnish, a dance routine and finally having a fit. There is a beautifully slow, dreamy aspect to the film, with the camera concerned with Toni’s unswerving focus on whatever the task in hand is, as a world of older teens float by her, their conversations indistinct and their faces blurred. In the boxing gym, Toni’s body is regimented. Understanding these moves, she flows in this discipline; her jabs are precise, her upper body strength significant and different from the other girls. Yet when it comes to dancing, her body isn’t as obedient, it doesn’t flow in the same way. She is clumsy, she misses steps, and is out of time with the other girls. It is here that we catch a glimpse of how powerful an actor this young girl is. In one scene, Toni finally gets the trick of the dance routine on top of the bridge she regularly runs up and over with her brother, and she explodes with joy at this physical understanding. These dance moves, which seemed so beyond her reach, are suddenly accessible and she fluidly slides through the routine, enjoying every single moment, her smile testament to this new skill she’s cracked. In this moment, it becomes clear that Hightower is a talented dancer who must have been performing against her own talents to appear as clumsy as she does when dancing during the first part of the film.

Despite Toni’s resistance to what is going on around her, she too has a fit, which lifts her from the ground, and the film ends as she flies into the arms of the suitably impressed troupe. The soundtrack perhaps makes the final comment as Kiah Victoria in ‘Aurora’ asks: “Should we be slaves to gravity?” The film does not end with an easy explanation, and there is a beauty in the space it allows the audience to make up their own minds. Were the fits performed or are they a phenomenon that cannot be explained? Like in much of girlhood, there are no clear-cut answers.

Image 1: The image is taken from Lionsgate’s official website for The Fits, www.thefitsfilm.com; all rights reserved.
The image shows a young black girl looking directly at the camera with her hair tied back and braided into two long braids, one on each shoulder. The girl is Royalty Hightower who plays Toni in the film. Her hands rest on her head as she is in the middle of doing a sit up. She looks serious and concentrated and is not smiling. The blue rope of a boxing ring can be seen blurred in the background.

Image 2: The image is taken from Lionsgate’s official website for The Fits, www.thefitsfilm.com; all rights reserved.
The image shows a young black girl looking directly at the camera with her hair tied back and braided into two long braids, one on each shoulder. The girl is Royalty Hightower who plays Toni in the film. She has an unwavering look of determination on her face. The image is washed in soft pastel colours of orange and purple with lines of blue and white light streaked across it. At the bottom of the image, the words “‘The Fits”’ are outlined, and there are some quotes from reviews.