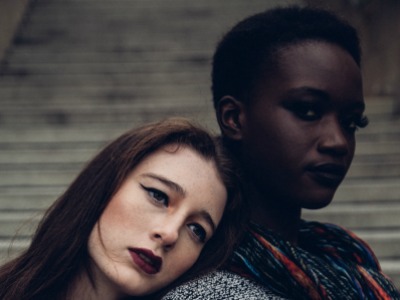 Louisa Adjoa Parker is our guest blogger for April

People often say “I’m not racist, I’ve got black/Muslim friends”. I’ve had friends say this then proceed to tell me – an immigrant’s daughter – that immigrants/Muslims are causing problems for society, or that there are too many here. Let me unpack the statement a little.

Firstly, if you need to prove you’re not racist, the chances are you’ve said/thought/are about to say some racist things. During the ‘politically correct’ nineties and noughties, it was as though being accused of racism became worse than being on the receiving end of it. There’s a brilliant meme, in which a girl puts her finger on the lips of someone who’s just said “I’m not racist, but …” saying “Shh. Nothing good comes after that.” She’s right.

It is possible to be in a relationship with someone from an oppressed group that you hold prejudicial beliefs about. Misogynistic males have been known to have relationships with women. Think of the old-school comedians joking about their mother-in-law, or the man who proclaims “I love women! I’m married to one!”

It means nothing. White people can have relationships with non-white people or have dual-heritage children and still hold unconscious racist beliefs. A Facebook post went viral last year when a black man posted screenshots of texts with his daughter’s white mother after he took their daughter to get her hair cornrowed. The mother said she didn’t want her daughter to have an “ugly black hairstyle”.

Then there are the stereotypes that white people might unconsciously buy into, for example, that Asian women are docile and black people are hyper-sexual. Of course, this isn’t to say all white people in a relationship with a person of colour think like this, but it’s complex and this stuff goes deep – we are drip-fed racist and sexist beliefs from birth.

Jennie* is a white woman married to a black man with three dual-heritage sons. She assumed she “harboured no racism”, but moving to rural England led her to start studying race:

I focused on how white people’s English sense of identity, superiority and privilege had been constructed over years of colonisation, empire, race-based practices and more latterly, liberal, ‘politically correct’ ideas about race. I needed to turn the lens on myself too and consider the ways in which I benefitted from a system of white supremacy and helped to reproduce that system, whilst being married to a black man

There are different degrees of racism. White middle-class liberals might imagine a racist to be a flag-waving thug with a shaved head. But extreme racism is only one end of the scale. White people can unknowingly inflict micro-aggressions on black people, something that’s highlighted brilliantly in the film Get Out.

It’s easy to understand why white people don’t notice racism when it doesn’t affect them. This is part of white privilege, the very nature of which – like male privilege – is that you don’t know you have it. You don’t have to think about someone hating you because of the colour of your skin when you walk into a room. White fragility is another theory that has been gathering attention. It was developed by Robin DiAngelo, a white American woman, who suggests that all white people hold racist beliefs, but get defensive if this is pointed out and that by not challenging racism white people are colluding with it.

It’s uncomfortable, I get it: no-one wants to hold their prejudices up to the light. But we all have them and this is the only way to move forward.

The belief that white people are superior to others – a hangover from Empire and colonialism – is deeply engrained in our collective consciousness and plays itself out in a myriad of ways. White people need to be having conversations about this without getting defensive. Waving your black friends around like a shield to protect you from accusations of racism is not OK.

Jennie* says “The real work is in standing alongside and fighting for equality, in learning about the experiences that are not our own, in listening instead of assuming and the hardest work of all, in examining our own lives and attitudes.”

We can move towards a future of equality, but it’s going to take some work.

*name has been changed

Image is of a white and a black woman. The white women rests her head on the black woman’s shoulder, sadly looking away. The black women, wearing a colourful scarf and grey jumper, looks straight at the camera.