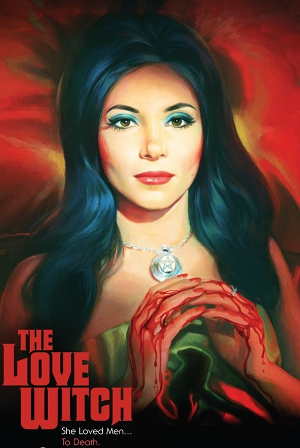 Spoiler alert for The Love Witch

In full 1970s technicolour, Anna Biller delivers something truly unique in the form of her 2016 feature, The Love Witch.

To say that The Love Witch is a parody of B-movies or of the horror flicks of yesteryear, simply does not do it justice. Camp, funny, kitsch and vibrant, The Love Witch lives by the rules of pastiche cinema yet also offers a reflective and insightful view of sexuality, feminism and gender in our world today. Director Anna Biller has succeeded in creating a seamless piece of cinema that will be revered for years and a feminist statement at the same time. Who knew both were possible?

Elaine (Samantha Robinson) is a young witch, recovering from heartbreak after the breakdown of her marriage and the subsequent suspicious death of her husband. The film opens with her driving along a scenic road, in a bright red vintage convertible, her voice-over explaining how desperately she wants to be over dead husband Jerry and find new love. The blatantly obvious rear projection as Elaine is driving alludes to Hitchcockian cinema (particularly reminiscent of the hopelessly flawed Judy/Madeleine character of Vertigo, the winding West Coast highways are more than similar). Elaine, chain-smoking, is stopped by a cop who informs her that her tail light is out. With a close-up of Elaine’s bewitching eyes, the cop is stopped in his tracks. He lets her off with a warning. Elaine drives away. We are left bemused and bewitched also – which neatly summarises The Love Witch’s style and commentary in one short scene.

Elaine, settling into a new apartment rented to her by fellow coven member Barbara (Jennifer Ingrum), meets various men who each succumb to her charm. They also each succumb to premature demise. It’s heavily implied that Elaine played a part in the death of Jerry, her ex-husband, and she certainly has a heavy hand in the deaths of both Wayne (Jeffrey Vincent Parise) and Richard (Robert Seeley); two men who become utterly besotted with her. Elaine seems to enchant them with her gaze, as well as a handy little magic potion that each of them drink. From stoic, stereotypically masculine men, Richard and Wayne both turn into emotional wrecks, both crying out for Elaine to comfort them as they tackle their new found feelings. They cannot comprehend these emotions of love and desire, and their feelings ultimately kill them.

Biller toys with the ideas of both femininity and toxic masculinity, reasoning that an inability to feel emotions is, quite literally, a killer of men

In an interview with The Guardian, Biller talks about the pervasive theme throughout the film; the struggle between men and their emotions. “Men are known for being much less emotional than women, but, in my experience, they’re much more emotional. And that’s why they won’t, or can’t, open that gate – it would destroy them. And that’s what kills all the men in my movie – having to experience their own feelings.”

As a femme fatale type character, Elaine could be seen as the evil seductress bringing men to their knees and to their inevitable fate with her beauty and sexuality. In The Love Witch, Biller subverts this stereotype; it is the inability of men to be emotionally open which destroys them in the end. Biller toys with the ideas of both femininity and toxic masculinity, reasoning that an inability to feel emotions is, quite literally, a killer of men.

Elaine, like many femme fatales before her, is the embodiment of beauty and seduction. Yet, as Trish (Laura Waddell) points out, Elaine ‘[sounds] like you’ve been brainwashed by the patriarchy’. Elaine believes that women should make men comfortable, give them plenty of sex and bend to their every demand. That, she says, is the key to love. It sounds like something out of a retro Good Housekeeping magazine (or perhaps a women’s magazine from today – ‘25 Ways to Please Your Man’ etc). Elaine is a perfect woman, perfectly poised to fulfil male desire, yet it is this embodiment of patriarchal values that ends up destroying all the men she comes into contact with.

The commentary on femininity, sexuality and the patriarchy is underlined by the camp, kitsch, vintage vibe that oozes from every frame of the film. It’s not that The Love Witchlooks like a classic film – it is a classic film. It doesn’t try to emulate imagery, motifs or design, rather it was filmed and behaves like a film from the ’70s. The use of a mobile phone toward the end of the film only cements Biller’s vision. Instead of questioning why there is a mobile in the ‘70s, we accept it as part of this universe. Perhaps it is witchcraft? Perhaps it is an alternate universe? Either way, there is nothing within The Love Witch that prevents us from engaging fully in the world Biller has so carefully constructed.

Biller not only wrote, directed and edited The Love Witch, but she also hand-painted, designed and built many of the sets. She made various costumes, and drew many of the paintings which hang in Elaine and Barbara’s apartment. As if this wasn’t enough, she also wrote some of the music for the film too. If we are to call any director an auteur, it surely has to be Biller.

The Love Witch has been described as a homage to sexploitation cinema of the 1960s and ‘70s, but to put it in this category completely undermines the journey which Elaine is on and the very deliberate feminist coding Biller places throughout the narrative

Biller utilises every inch of the screen to put across her feminist messages, yet she has been wildly misunderstood by a lot of critics. The Love Witch has been described as a homage to sexploitation cinema of the 1960s and ‘70s, but to put it in this category completely undermines the journey which Elaine is on and the very deliberate feminist coding Biller places throughout the narrative. In the attempt to reduce the film to a throwback to sexploitation cinema, critics are doing exactly the same thing as the men Elaine meets in the film; objectifying and commodifying. Instead of reading the film as a comment on sexism, the treatment of women and the modern ideas about love and relationships, many critics see Elaine as a simple sex object, thus proving Biller’s point.

It is often this way, perhaps due to the patriarchy’s insistence that any woman who is assertive or shows leadership is controlling or a bitch. This tired rhetoric is pretty prevalent within the film, as Biller creates a character who is very much being the boss of her own life.

Witchcraft, the main theme of The Love Witch, is just another example of how women have been punished for showing desire for autonomy and independence. Witches are seen to demonstrate how powerful women can be and this has historically threatened patriarchal societies. The relatively modern ideas about witchcraft (stemming from the increasing power of the Christian church in Europe during the Middle Ages) usually depict witches as depraved women who cannot control their carnal desires. These women were seen to reject the church’s notions that women should be subdued, domestic and servile to men.
Reading books, using medicine, speaking out of turn, meeting with other women and the status of your relationship might be reasons to label a woman a witch and kill her.

Witches are prevalent throughout literature, film and television but are rarely depicted as women who play by the rules of the patriarchy. Though many do not resemble the ‘warty old hag’, they are often outsiders or oddballs. Even Sabrina the Teenage Witch (a pretty positive representation of witches), had two aunts who didn’t conform to societal expectations as they were both over the age of 40, single and living with each other rather than married to men.

Though the majority of The Love Witch is tongue in cheek humour, when the men of the town chase Elaine from the burlesque bar yelling “burn the witch!”, it becomes altogether sobering. We are reminded of a period in American history where women were burnt alive by angry mobs due to rampant misogyny. The world Biller has created in The Love Witch is a reflection of our own, and the image of a mob chasing down a woman insisting that she is murdered in cold blood is a very uncomfortable one. For all of the comedy and parody in the film, there are some really serious points being made.

The most impressive thing about Biller’s film? The conversations and comments about gender and sexuality that seem to fit perfectly in a retro setting, yet are completely relevant today. Not just relevant; these are topics which are still being actively discussed. It almost leaves you with a ‘nothing ever changes’ feeling, but still elated by the fact that Elaine finally gets what she wants: a heart.

You can watch The Love Witch on Amazon Prime here

The image shows Samantha Robinson, who plays Elaine, looking directly at the camera calmly and perhaps seductively. She has dark flowing hair and a large diamond necklace. Her hands are clasped near her chest and they are covered in blood. The title of the film is in the bottom left hand corner and underneath the title are the words ‘She loved men…to death’. The image is sourced from The Love Witch’s official website http://thelovewitch.oscilloscope.net/#, all rights reserved.