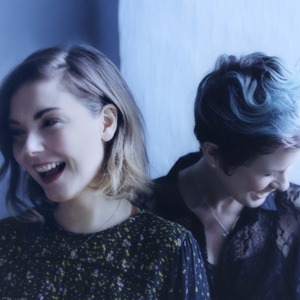 “And I can stay as long as I like, ‘cos no one’s calling me to come back inside”

Gorilla, a modest-sized venue on Whitworth Street in Manchester just off student land (Oxford Road), probably holds somewhere between 250 and 350 people. It feels slightly bigger than the average venue of this size thanks to a (very small) upstairs area that accommodates the merchandise stand along with a set of seats giving a balcony view of the stage. The merchandise stand has signed 7-inches, patches and some very nice Honeyblood t-shirts which seem to be selling healthily.

It’s the week before Christmas but there’s no snow, nor even any fog tonight and the venue is filling up nicely with fans. There are hipsters, middle-aged men and a small group of teenage girls; the latter group possibly diminished in number as the gig is taking place on a school night.

Manchester band Pearl City, the first performers of the night, are an unassuming boy with a laptop, keyboard and bag of musical tricks, and a girl with a big voice who undulates across the stage like a millennial Kate Bush. They used to be known as Bernard & Edith and appear to have taken their new name from a Mancunian Chinese restaurant.

Musically, it feels quite dark wave but with a modern synth-pop twist. Vocally and lyrically, Kate Bush does appear to be the primary influence, but I also think of Lorde at moments and, very briefly near the beginning, Miya Folick in full ‘God Is A Woman’ mode. I have mixed feelings throughout about whether it always works but they’re a young band whose front woman has stage presence more or less nailed and their talent is obvious. Pearl City will be worth watching over the next year or so.

Honeyblood’s singer/guitarist Stina Tweeddale, she of the powerful Kristen-Hersh-meets-Corin-Tucker voice, wanders onstage sometime later to soundcheck her guitars and microphone. Her down to earth, musician-at-work approach to this task means that the audience just let her get on with it, barely registering her beyond quietly acknowledging the clue that the band will be on soon. This is the thing with Honeyblood: their sheer unassuming nature and quiet brilliance combined with Tweeddale’s tough wariness means that you are focusing on the band as musicians rather than as personalities and there is nothing to get in the way of the music.

The band’s set starts subtly with some of their slower songs such as the Angela Carter inspired ‘Choker’ from their debut self-titled album and ‘Walking At Midnight’ from the current album Babes Never Die; the crowd are enthusiastic but more than ready to take it up a notch when the fast songs come.

Set highlights include the aforementioned ‘Walking At Midnight’ which, along with the autobiographical ‘Gangs’, is one of the most complex, fully realised tracks on Babes Never Die. There is also a blissful conjoining of debut album track ‘Fall Forever’, with its melodic Hot Rock era Sleater-Kinney guitar sound, with the go-berserk-in-the-moshpit punk rock assertiveness of ‘Sea Hearts’.

They finish with the cheery anthem to female independence that is ‘Babes Never Die’, by which time the moshpit has grown in size and enthusiasm and is a sea of punching arms and leaping, writhing bodies

Of all the songs, ‘Sea Hearts’ with its toast to freedom of: “And I can stay as long as I like, ‘cos no one’s calling me to come back inside” exemplifies the idea of Honeyblood as a band that teenage girls can take to their hearts. As they told the Guardian in 2016, they’re trying to portray a more complex version of young femininity than the usual coy stereotypes. Raw and untamed is what they’re aiming for. ‘Sea Hearts’ is a bit like one of the more raucous scenes from the show Our Ladies of Perpetual Succour, condensed into a four and a half minute punk pop song.

Early single ‘Killer Bangs’ also goes down a storm, as well as the hilarious ranty punk charge of ‘All Dragged Up’, with its bouncy ska guitar riff and exasperated refrain of: “Why won’t you grow up?!” Tweeddale introduces it as a song “about throwing a tantrum”.

She and drummer Cat Myers interact increasingly warmly with the crowd as the audience’s enjoyment becomes ever more obvious. They finish with the cheery anthem to female independence that is ‘Babes Never Die’, by which time the moshpit has grown in size and enthusiasm and is a sea of punching arms and leaping, writhing bodies.

Honeyblood leave the stage in triumph, only to return a few minutes later following the rhythmic clapping of hands, stomping of feet and insistent chant of: “ONE MORE SONG! ONE MORE SONG!” They do better than that, giving us two. The crowd ask (very nicely) for ‘Super Rat’, leading Tweeddale to remark in amazement: “Did you say please? You’re so polite!” They then launch into their swaggery but ferocious rebuke to a player and a ladies man, with its catchy, chantable chorus of: “I WILL, Hate, YOU, Forever!”

Another turbo-charged punk anthem follows and the crowd, knowing this is it for the night, go for it. Gazing out across a sea of sweaty, happy faces, the band drink us in and Myers takes a picture of the crowd with her smartphone just before they skedaddle.

It’s just over a year since Babes Never Die was released, and with this gig the band are coming towards the end of their promotional touring schedule. They began the tour a well-kept secret, but the secret is clearly spreading via word of mouth and BBC 6 Music, amongst other things, and their next tour could be the one to take them to the next level. They’ve certainly worked hard for it.