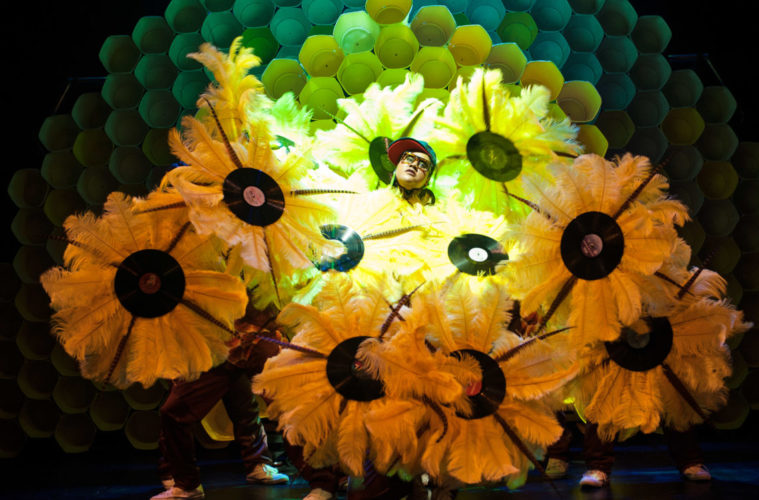 In the land of the milk and the honey

Manchester is cocooned in an eerie fog this Monday night in December; a fog so thick that only the occasional really strong fairy light can penetrate. It stays all day and night, following me down Whitworth Street and Jack Rosenthal Street to the welcoming building of HOME. There the bar is selling Hot Brown Honey cocktails containing warming angostura bitters, Amaretto and brown sugar at the discounted rate of £6 in the bar. They sound lovely but I refrain because I am working.

The flyer advertising Hot Brown Honey the show (as opposed to the cocktail) speaks volumes. It is an image very much in the Blaxploitation tradition, all early 1970s curly fonts in browns and yellows over an image of six naked women, one sporting an afro. But something is amiss; these ladies do not appear to represent the stereotypical image of early 1970s black womanhood. They are not the ‘Foxy Lady’ from the Jimi Hendrix Experience song, nor the Pam Grier of gritty films or the grinding funk of Betty Davis. Their faces aren’t so much signalling “come hither” as “fuck off”. There’s a discordance there, which is one of many clues to the uninitiated as to what you’re in for with this show.

Clue number two occurs in the stalls of Theatre 1, where the Honeys are mingling with the audience, charming us, selling us raffle tickets (raising money to support women with children working in the arts) and talking to us about the show. They genuinely care that we appreciate there is content in the show that some may find challenging and that they are here for us if we want to talk about it later.

As the show opens, we are welcomed into the Hot Brown Honey Space, formerly Theatre 1, by Lisa Fa’alafi. The space is now very much owned by the Honeys. It is sweet, it is warm, it is brown … it is The Hive. For a city whose emblem, talisman and mascot is the worker bee this notion, and the stage backdrop of a honeycomb style ‘hive’ is very easy to take on board. “It’s a Monday night but I know you’re going to be a Friday night crowd” she says, before handing over to Opha, who lets us know that this is going to be a show in which full-on audience participation is not only encouraged but necessary and that we really need to “make noise!”

They warm us up with some hip-hop style call and response before segueing into an homage to burlesque. They reference the Windmill girls and their contemporaries with strategically positioned large feather fans which look like sunflowers; the feathers forming petals around 12” records in the centre. Following this up with nods to Josephine Baker, hip-hop, slapstick comedy and twerking.

From their Hot Brown Honey boiler suits (brown with a honeycomb pattern) they are stripped down to yellow hip-hop style track suits and, lastly, surrounded by tangled clothes and with unhappy expressions, to the black and white uniform of the maid. The maid motif is one that will reoccur throughout the show, the ultimate shorthand for black female oppression.

The Honeys are a hugely talented and versatile bunch who make use of a variety of traditional and non-traditional theatre genres and techniques to discuss stereotypes of the black woman alongside issues of colonialism, cultural appropriation, domestic violence, cultural myths and hidden histories. They use a lot of humour to do so but, at times, it does feel that sweariness is being used in lieu of actual jokes. They are at their most powerful when using one technique rather than several at once and there are two parts of the show that make me cry. One is a harrowing section on domestic violence, which uses circus skills to poignant effect. Our heroine is provided with a form of escape via two aerial silks, which she climbs, is tangled up in, climbs again, drops from, is tangled in but continues to climb, seemingly representing a journey to freedom.

The other routine that moves me to tears references the colonisation of Australia by the (future) UK, represented by a figure bound in an Elizabethan-style long dress and ruff, gagged and with tied hands. The costume is made entirely from the Australian flag which, as a Commonwealth country, incorporates the union jack. The figure writhes and fights to get out of the costume, to un-gag herself and un-bind her hands, until she is reduced to a white body stocking, naked but free. I find this distressing to watch but also cathartic and very powerful, particularly the moment when she raises the Aboriginal flag, an echo of the runner Cathy Freeman, who fought the Olympic authorities to run with the same emblem.

There are a number of instances when I’m genuinely not sure whether I should be laughing or not. There is a routine showing a clearly drunk girl with braids wearing a bikini made from the Australian flag (the image above shows the performer before she has taken her dress off), hula-hooping and guzzling booze in oversized sunglasses. She begins the scene screaming “Whoo-hoo! I’m in ASIA…”

On the one hand, this section represents white Australians and Brits abroad who are carelessly culturally offensive and ignore local sensitivities, but blame ignorance or alcohol when called to account. On the other hand, the artistry involved and what she manages to achieve with multiple hula hoops in a massively high energy performance is genuinely stunning.

There is also a dance section during which the backing dancers seem to be gradually regressing, in the Darwinian sense, and make increasingly obvious ape noises towards the end of the piece; an unsubtle subtlety which appears to be unnoticed by large sections of the audience, judging from their reactions. To be fair, this occurs during a sequence in which the leopard-print catsuit wearing, giant afro sporting heroine has been provided with a pair of fake boobs the size of Lola Ferrari’s, which she bounces with gusto, and I think most people were watching that and not noticing all the other things that were going on alongside it.

There are also moments that are flat-out hilarious, including a sort of genius cabaret mash-up of Livin’ Colour’s ‘Love Rears Its Ugly Head’, every version of ‘I Put a Spell on You’ (but mainly the Screamin’ Jay Hawkins version), Kelis’ ‘Caught Out There’ and Adele’s ‘Hello’, among others; the latter being given a fabulously sinister twist by its context.

The final routine is based around notions of privilege and consists of a recorded “how to tell if you are privileged” quiz/polemic as the Honeys dance in their maid outfits. This makes for a sobering juxtaposition but doesn’t feel as powerful as the section of the show given over to challenging the thinking and ignorance behind the ‘Where are you really from?” question, which is much more interrogative and vocal.

This is a show that can quote Angela Davis and Audre Lorde, subvert Gil Scott-Heron’s ‘The Revolution Will Not Be Televised’ with the phrase: “The revolution cannot happen without childcare”, reference hop-hop and goddess worship while also including topical quips about the British Royal Family: “You guys should get used to a black woman telling you what to do … All hail Princess Meg.” They don’t so much break down the fourth wall between audience and performer as neglect to put it up in the first place. It’s satire, activism, political commentary and futuristic cabaret all rolled into one, as exemplified by the sly slogan: “Decolonise! Moisturise!”

The audience end the show on their feet; clapping, dancing, cheering and whooping … It doesn’t feel like theatre, more like a gig, rave and carnival all rolled into one. Not everyone is impressed; someone near me rather smugly mutters: “Not in my name” during a fiery speech about colonialism and I hear one woman say to another upon leaving: “Next time, shall we go and see Matilda instead?”

On the way out, we pause to admire the beautiful strings of origami stars, hanging in streams from the walls of the corridors. The script on the wall explains that these stars are part of the One Million Stars to End Violence project, which HOME describe as “a love and peace filled community project” and “symbols of light, courage and solidarity to end all forms of violence, including violence against women, bullying, and racism.” As with Hot Brown Honey itself, it uses something beautiful to discuss something really ugly.

After the show, the Honeys mingle with the audience in the foyer. Opha had said earlier that this gives the audience the chance to talk to the cast about bits of the show they might have found uncomfortable, but it mainly seems to be people getting selfies with them. Others just want to shake them by the hand and say it was brilliant. Which it is.

Both photographs are by Dylan Evans and are courtesy of HOME and Hot Brown Honey.

Image one is of a group of fans, made of yellow feathers around 12″ records as described above. The fans create a roughly oval shape and just a head of one of the performers wearing a baseball cap pokes through at the top. A light shines down on her face and the surrounding feathers. The ‘hive’ of the stage design can just be seen behind.

Image two is of a hula-hooping woman. She wears a yellow dress with the green ‘Australian Made’ symbol on it. Her yellow bikini can just be seen underneath. One of her arms is raised in the air and the other holds a drink. Behind her the hexagon shapes of the hive can be seen.