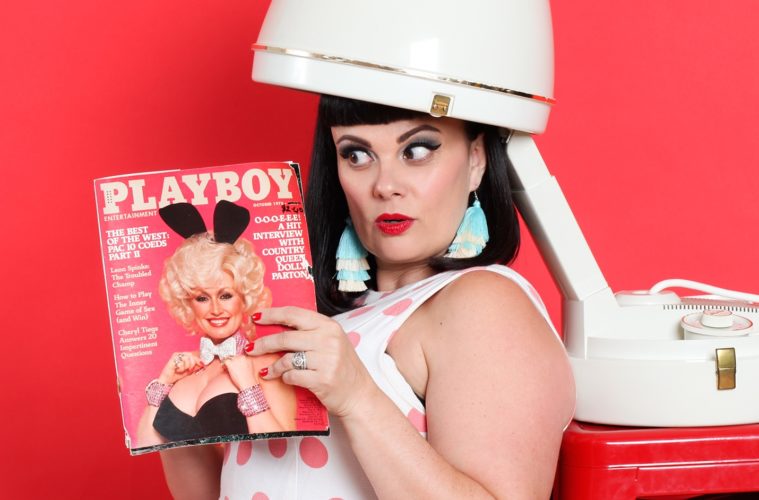 Tami Neilson was born in Canada and now resides in New Zealand, yet her music sounds decisively from the US. From the twangy country of ‘Manitoba Sunrise At Motel 6’ (an homage to Glen Campbell, written on the day he died) to the bluesy ‘A Woman’s Pain’, to the rock’n’roll ‘Kitty Cat’, it’s hard not to imagine Neilson out in somewhere like Nashville or St Louis in the 1950s, singing at a teenage dance.

That is, until you listen to the lyrics.

Take opening track, ‘Stay Outta My Business’. At face value, this rollicking tune might be straight out of a Brenda Lee or Ruth Brown songbook, but is basically a ‘T’aint nobody’s bizness if I do’ for the modern day: an eloquent and elegant ‘Fuck you!’ that delivers a spirited defence of the working mother, amongst other things.

As Neilson says in the album’s accompanying press release, Sassafrass is the “mouthy lovechild of the current social climate and my own experiences as a woman, mother and daughter.” She adds, “It’s also my attempt at challenging a society that doesn’t yet treat women equally in order to shape a better future for my children.”

There are a number of techniques Neilson deploys to get her points across. On ‘Bananas’, she dives headlong into Carmen Miranda territory with what sounds, at first glance, like a ‘50s novelty record. So convincing is it, with it’s light calypso flourishes and bouncy melodies, that I find myself asking, “Didn’t Alma Cogan do this one?” Then, I start to listen to the lyrics and I realise I’ve been had: “You want equal pay just for working all night and day”, sings Neilson, making it perfectly clear that, in this case, the ‘bananas’ in question are a comment on a world where women are still not earning the same as men.

She doesn’t need to hit you over the head with the message, it will creep up on you later

Similarly, the equally bouncy ‘Kitty Cat’ is a fast rock’n’roll number with energetic saxophone. It wouldn’t sound out of place on the soundtrack to the original (the John Hughes film version) Hairspray. There is a clear feminist message to the track with Neilson making it clear that no one gets to own this ‘kitty cat’; she ain’t yours and she pleases herself.

It’s not all high-octane rock’n’roll, however. Neilson has a musical background that encompasses soul, blues and country, as well as roots, rock’n’roll and rockabilly. She’s able to tackle all of these styles with ease thanks to a voice that is reminiscent of both Patsy Cline and Dinah Washington, not to mention Etta James.

The track ‘A Woman’s Pain’ tells the story of Neilson’s First Nation grandmother —in Canada, First Nations people are descendant of the country’s original inhabitants, who lived there before European explorers arrived —who comes across as someone dealt a bad hand from day one. Bluesy with a country twang, the track has the slow southern sound of Dusty Springfield’s Dusty In Memphis, along with strings to die for. It is simple but devastating in it’s impact.

The slow, southern gothic of ‘Smoking Gun’ belies its origins as a comment on sexual harassment in Hollywood and, similarly, ‘Devil In A Dress’, while commenting on female stereotypes, is so sonically close to a ‘50s original like ‘Devil in disguise’ that it’s almost unnerving. With its slinky blues rawness, the song is an absolute masterpiece of film-noir-refined sophistication, to the extent that it almost undermines the message it’s trying to get across. But perhaps that’s the point: Neilson is brilliant at subtlety. She doesn’t need to hit you over the head with the message, it will creep up on you later as you’re dancing or singing along.

Sometimes, though, there is no subversive message and a song is simply what it seems to be. Such is the case with the ‘50s style ballad ‘One Thought Of You’, which was written by Neilson’s father; a man who, until his death, led the family band The Neilsons. It sounds like a Patsy Cline number and would sit nicely alongside an artist such as Neko Case. There are also traces of Peggy Lee in the song’s wistful sensuality. Similarly, ‘Manitoba Sunrise At Motel 6’ wouldn’t sound out of place filed next to Lone Justice. Neilson does blues well, as evidenced by ‘Diamond Ring’, a noirish affair with a straightforward bluesy groove. She also makes damn fine rock’n’roll, as shown by the fantastic tribute to Sharon Jones, ‘Miss Jones’, which is a fast, garage-y affair with furious horns — pure rock’n’roll. It features a little bit of vocal call and response and it’s this element that makes it sound like the Shirelles on speed, or perhaps a more off-kilter Northern Soul record; one that would definitely have inspired a lot of fast spins across the floors of venues such as the Twisted Wheel and Wigan Casino. Finishing in a speedy crescendo, ‘Miss Jones’ no doubt leaves the dancer crumpled on the floor amidst a sea of talc, delirious and in a state of exhilarated exhaustion.

The album concludes with the slow wind down of ‘Good Man’, a drawn-out, minimalistic ballad in a late ‘50s or early 1960s vein that wouldn’t be out of place on a Dreamboats and Petticoats compilation. This is pure slow dance, and a great way to come down from the album’s earlier energy.

Sassafrass is feminist subversion wrapped up in ‘50s packaging, but it’s not just for hipster girls in vintage dresses and it’s too lovingly made to be an elaborate joke. It’s a retro classic of a very high standard, one that honours the original sounds equally as keenly as it seeks to update the message within.

Sassafrass is out now on Outside Music

Image one is a photo of Tami Neilson in which she is positioned sideways on, under a hairdryer holding a copy of Playboy magazine which has Dolly Parton on the cover. She is wearing a ’50s style pink and white dress and looks alarmed or surprised. Image by Mrs Jones courtesy of Silver PR

Image two is a photo of Tami Neilson facing the camera and smiling. She is wearing a green ’50s style dress and is wearing a pink patterned headscarf. Image by Mrs Jones courtesy of Silver PR

Cazz Blase likes the idea of a circle skirt, but not the practical realities