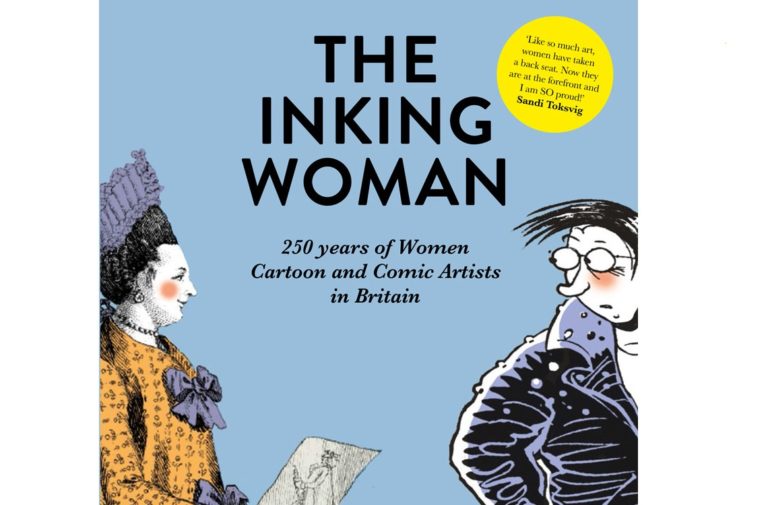 The Inking Woman: 250 years of Women Cartoon and Comic Artists in Britain As is so often the way, minority representation within the pages of comics and cartoons typically precludes diversity among the people that have created them.

So often we’re told that a certain book, comic or cartoon will represent women, people of colour, LGBTQ+ or non-binary people, only to find that the creative team are all, or nearly all, straight white men. For example, the much-admired series Paper Girls, which is lauded for its cast of young women, has not a girl to be seen in its byline, and the same can be said for many issues of The Wicked and the Divine and Giant Days. The book is itself proof that for centuries women have been at the centre — and peripheries — of British cartooning.

One contributor recalls being asked “Why aren’t women funny?”

For female cartoonists and graphic novelists, whether professional, amateur or aspiring, The Inking Woman is an archive of our history, our communities and our achievements. One contributor recalls being asked “Why aren’t women funny?” With examples of everything from political postcards to weekly strips, to heartfelt autobiographies, The Inking Woman gives a resounding answer: women are funny. Deal with it.

Accompanying the 2017 exhibition at London’s Cartoon Museum, The Inking Woman: 250 years of Women Cartoon and Comic Artists in Britain tracks the history of female cartoonists from the 18th century through to the present day, including examples of their work, their own commentary on their careers and the joys and difficulties they have experienced.

Although the high-quality printed examples of each woman’s work are a pleasure to own, in a world where most images are available online it is the artists’ comments, sent in response to a questionnaire, which are the most fascinating element of this book. It is, nevertheless, a wonderfully image-heavy publication, sometimes devoting one or more pages to the work of one artist while managing to cover 150 artists across three centuries. This breadth is impressive and much greater than most other books published on this topic.

The lack of images of the artists themselves is understandable (and leaves more space for their work!) but does have the occasional downside. For example, it is not immediately apparent that, despite much discussion by the editors of how “the history of women’s cartooning is understood within a framework of whiteness”, contributors to the book are predominantly white.

Book authors Nicola Streeten and Cath Tate, whose own individual successes in the field and personal passion for the topic allowed the project to come into being, seem aware of the position of their book and, certain omissions aside, hold true to their admirable goal of showcasing female cartoonists through their own work and words.

The Inking Woman really comes into its own when exploring the period from the 1970s onwards, when it becomes a ‘living history’. The comments and stories sent in by the contributors really make the book and the editors wisely make plenty of space for them. Tamara Drewe creator Posy Simmonds’ reminiscences on working on Punch, a weekly magazine of humour and satire, in the ‘70s – including being excluded from all-male lunches and picketing the office – is well worth the half-page of text. Some topics, such as living with disabilities and illness are given a whole chapter to themselves. Others, such as queer identity, get more sporadic coverage.

Along with Tate and Streeten, the book’s editorial segments are written by Simon Grennen (who recently published his own book on the influential Victorian cartoonist Marie Duval), Carol Bennett, Sofia Niazi and historians Sheila O’Connell and Elizabeth Crawford. They help to highlight important phases in women’s cartooning history and stress the impact of feminism and group movements. Nicola Streeten is herself a co-founder of Laydeez Do Comics, the UK’s first women-led comics forum, while a segment in ground-breaking women’s cartoon anthology FANNY, written by Carol Bennett, describes her own collaboration with Cath Tate. When it comes to first-hand knowledge of the industry, the reader is certainly in good hands.

The final editorial piece, written by founder of London’s DIY Cultures Festival Sofia Niazi, is particularly insightful and relevant to the modern world of cartooning. Bringing the book’s chronology into the current decade of indie graphic novels, zines and Tumblr, it focuses on women of colour and grass-roots activism. Uncompromising in its defence of change and hopeful about the future potential of self-publishing, it is disappointing that, unlike others in the book, this piece is not followed by a wealth of examples.

Sadly, this lack of representation is a true reflection of what is happening now. Maybe we can all contribute to the next set of examples, I know I’m feeling pretty inspired right now. I join the writers in hoping that both the exhibition and this book are the first of many highlighting the excellence of women in cartooning. And maybe we could have The Inking Enby next? Just a suggestion.