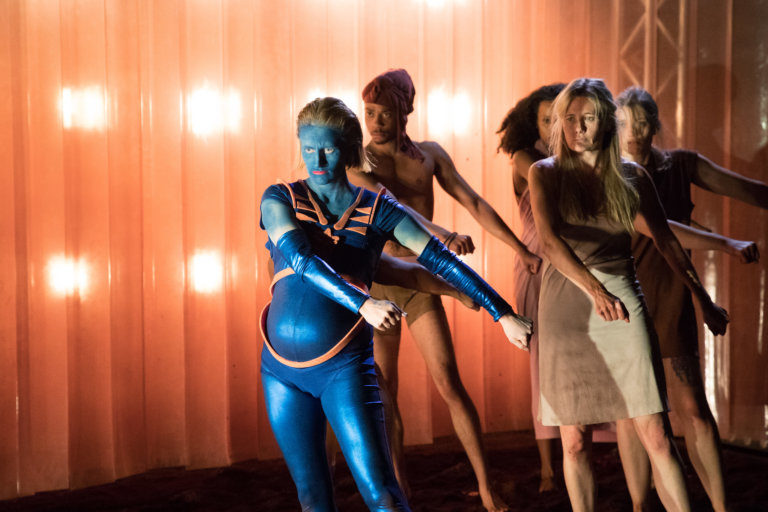 A collaboration between Unlimited Theatre, RashDash and HOME, the tagline for this show is: “The future is coming. Stop being normal.” “Stop being normal” is also the suitably insidious and bullying slogan of the fictional tech startup Unlimited Enhancement Technologies, whose CEO Evelyn Musk is played with swagger and glee by Alison Halstead.

Future Bodies has its origins in a 2015 commission that Leeds company Unlimited took on for the Science Museum in London to make “an interactive festival of human enhancement and biotechnology”. Unlimited founder member Jon Spooner’s family also has a lot of love for the Iron Man films, particularly Tony Stark’s character, who Spooner describes in the Future Bodies’ programme as a “troubled billionaire, tech entrepreneur, playboy charisma. He is so likably unlikable!” These two factors combined lead to Unlimited Enhancement Technologies, and the silkily persuasive Evelyn. The commission also gave Spooner access to the Science Museum’s Contemporary Science department, who provided the science that underpins the show.

Manchester theatre company RashDash seem to have provided a lot of the more interrogative questioning that fuels the production. Abbi Greenland, according to the production’s programme, was interested in the relationship between the brain and the body:

What does it mean to have a body? What is our body’s relationship to our brain? Is it just a vessel for carrying our brain to meetings? Why do we think of our bodies and brains as separate entities? Before we start merging ourselves with tech even more than we already are, maybe we need to explore our wholly organic potential much more deeply than we have?

Not being from a scientific background myself, but having a little bit of awareness of body hacking, microdosing and new technologies, I’m not sure what to expect of the production. I try to go in with a completely open mind as that seems to be the best way to approach it, and I advise that anyone thinking of attending does the same.

The show makes use of creative captions, which are projected onto the stage backdrop. This is an imaginative approach to subtitling that forms an integral part of the show, enhancing the feel of it

Theatre 2 at HOME is an intimate space which suits both the production and the show’s small cast. Future Bodies’ cast is made up of five actors (Deshaye Gayle, Alison Halstead, Kate Maravan, Lara Steward, Yusra Warsama) and one musician (RashDash’s Becky Wilkie). The five actors play multiple roles and Wilkie’s live music serves as soundtrack, sound effects and also a comment on the themes of the production, ranging as it does from catchy guitar-led punk pop to dystopian beatboxing.

Wilkie stands on her own small stage to the left of the main stage, clad in a blue catsuit, her face painted blue, wearing coloured contact lenses and sporting a painted on mouth. The effect is both familiar and highly unnerving: She appears to be channelling everything from Ziggy Stardust to Metropolis via Hazel O’Connor at the end of the film Breaking Glass.

For accessibility reasons, and because Steward, a profoundly Deaf actor, delivers most of her dialogue in British Sign Language, the show makes use of creative captions, which are projected onto the stage backdrop. This is an imaginative approach to subtitling that forms an integral part of the show, enhancing the feel of it.

Working with multiple characters and many short scenes, the show has a loose chronological order, beginning in the almost-now and then running forwards into the future, spanning years and, finally, generations.

It begins with the almost imaginable: a parent objects to the way a school wishes to trial some new technology, not wishing her child to be plugged into a computer, echoing debates around finger printing and biometrics in schools. Meanwhile, the smartphone app that measures your blood sugar is also the app that cheerfully informs you that you have breast cancer.

One of the most interesting scenes in this early section, from the point of view of audience reaction, is one in which all five actors emerge, one by one, take a seat on stage, take out their smartphone, and start playing with it, ignoring both the audience and each other. It goes on for about five minutes, but it feels much, much longer. You can feel the confusion and discomfort in the room from an audience who have been told that they must switch off their phones before the show starts and, as such, cannot resort to the distraction technique/comfort blanket provided by their own phones.

As a side-note, this scene is a particularly bittersweet experience for me in that, before I left to become full time self-employed, my lunch hours in my previous job were spent with a group of friends who all had smartphones except me. Every lunch hour we’d talk, have a laugh, but after a while the group would settle into silence and the first person would take out their phone, then the next one would, then another and another. Until eventually I’d be the only person at the table not staring at a screen. It is interesting to see that experience being projected onto an entire audience.

What about the implications for equality of opportunity in a society where only the rich can afford the tech to get ahead? Does this create a technology underclass?

Some of the questions posed by Future Bodies are very pertinent to where we are now in the ethical debates around body hacking, body modification and genetic engineering: Should you be trying to ‘cure’ deafness? What about diversity? Who disables a person? Society or the medical condition itself? What needs to be ‘cured’? Similarly, what about the implications for equality of opportunity in a society where only the rich can afford the tech to get ahead? Does this create a technology underclass? This is already an issue: not everyone can afford a smartphone, and yet there are softwares and services, from certain video conferencing apps (Houseparty) to taxis (Uber) to bike hire (Mbike), that you can’t use unless you have a smartphone. If that’s excluding people now, imagine what it will be when you can’t afford the tech to upgrade your brain and make you smart and productive enough to get a well-paying job.

This issue is taken to its logical conclusion in a scene played out by Kate Maravan and Yusra Warsama as boss and worker. Maravan plays a highly sophisticated and persuasive manager, fully versed in the language of emotional intelligence and transactional analysis, pressing the principled and resistant worker Warsama to have an “upgrade”. This is one of the most powerful and sinister scenes in Future Bodies, mainly because of its plausibility; there are already jobs where workers have restricted toilet breaks, have their productivity measured using technology, are encouraged to dress a certain way, wear makeup. Given how the world is going, it doesn’t seem like such a big step that in the future your boss may well be pressuring you to have your brain upgraded for productivity reasons and because everyone else on your team has done it. Another very powerful scene is Halstead’s monologue on grief and heartbreak, which makes particularly evocative use of Billie Holiday’s ‘All of me’. Halstead’s character is looking for a way out of her grief. She doesn’t want to hurt like this, all the time. She wants to be modified. To make it stop. The question being posed here appears to be: if you could keep the memories of a partner, and the love you have for them, but lose the pain of losing them, would you take it? The related issues hinted at here include the question of if you could be engineered and upgraded so as never to be depressed or anxious again, what decision would you make? How different would that be to taking anti-depressants and anti-anxiety medication every day of your life?

Similarly, if the technology existed to permanently modify the human brain to ensure that one never got depressed, anxious or in any other way unhappy, what about corrective brain implants for criminals? A scene is played about between Halstead as Evelyn Musk: charismatic, plausible, reasonable, persuasive and Gayle, playing an unrepentant and highly intelligent serial killer. He can choose to go on her programme, be modified and live. Or be executed.

The show concludes many generations into the future with Maravan playing a human who has chosen to die rather than be uploaded and become immortal. Her ancestors and descendants surround her as disembodied voices, lightly ridiculing her eccentric decision. Who doesn’t want to live forever? There is some gentle satire on identity politics, which is very well observed and not at all mean spirited in tone.

We end with a dance sequence in which the performers seem to be conveying humanity as initially innocent and joyful, then eccentrically malfunctioning, and finally losing the randomness and fluidity of their movements altogether and morphing into a physically robotic, blank-faced cyborg army. There are nods here to everything from Brave New World to The Time Machine to Doctor Who, cyberpunks and Jeff Noon, but especially to The Machine Stops and Metropolis.

Future Bodies is a show that takes a while to digest fully. It provokes and is thought-provoking. Everyone should see it.

Both images are press pictures for Future Bodies by Jonathan Keenan.

Image 1 shows Alison Halstead addressing the audience. She wears a long, white robe or dress that stretches out from her feet across the whole stage. Above her, projected on to the dark curtains behind, are the words: “and at my age that’s a little concerning”.

Image 2 and the feature image shows five performers dancing. The performer in front is Becky Wilkie in her blue catsuit and makeup. All five hold their arms stiffly out to one side and look fiercely ahead. Lights are reflected in the pinkish background behind them.