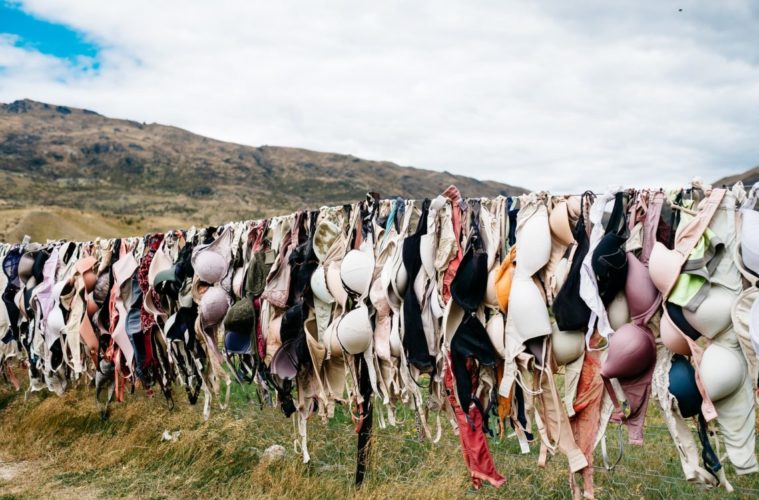 I need a bra that fits me, not the male gaze As we approach the end of breast cancer awareness month, we’re all aware of breast cancer. Charities have celebrated with t-shirts and fun runs, The Guardian has run beautiful photos of mastectomised women and Stella McCartney has given away 1000 £100 mastectomy bras.

But for an illness that is highly visible, culturally speaking, the reality of women’s bodies afterwards is policed to the point of invisibility.

Around one in eight women in the UK will have breast cancer at some point, of which around 81% will have surgery and, of those, 43% will have a mastectomy (Breast Cancer Care, February 2015). So there are a lot of us wandering around with one breast – we’re not niche.

But how often have you noticed one of us in the street? My guess is never. It’s because we’re hiding. In the age of the body positive movement, after 40 years’ discussion of the male gaze and over a century after deciding compulsory corsetry was probably a bad idea, our mastectomised bodies are concealed.

I’ve just had a mastectomy after a routine examination found cancer in my right breast. How I would move around the world with one breast wasn’t something I’d thought about before. But I’m a fairly happy person and I’m now particularly happy that having a mastectomy has stopped me from dying (we had a dicey month where we didn’t know whether that would be the case). So how I feel about my body is pleased. I feel celebratory: I’m not dead.

I like running, but of course my sports bra doesn’t fit anymore, so I Google mastectomy bras. There are thousands, but they’re all to be worn with prostheses. Amongst the plethora of niche underwear available (and there’s a lot), there’s nothing for a woman who just has one breast and doesn’t care who knows it.

I think to myself that this can’t be right. Sweaty Betty urges women to ‘dare to bare’, Nike is ‘for strong women who pave their own way’ and the Adidas brand is about ‘defying convention’. These companies love being body positive – the whole world does. Surely I’m not supposed to pretend I’ve got two breasts for the rest of my life?

But I am. Through great institutions like the NHS, internet capitalism, charities and well-meaning people, society will offer me: silicone implants, breasts made of my stomach fat, hand-painted stick-on nipples, sweat-wicking prostheses, swimming prostheses and hand-knitted softees. Don’t get me wrong, I’m glad these options are available for those who want them, but they’re not for me. And at the moment I’m being offered many ways to keep looking normal and avoid offending the eye of the average man in the street, but zero ways to just be myself: a woman, like thousands of women in the UK, with one breast.

I try to imagine myself explaining to the board of Nike, Adidas and Sweaty Betty. I imagine blank stares and incomprehension – “But wait, you can get a tummy tuck and breast implant on the NHS? What’s your problem?” And they’re probably sniggering because, after all, just talking about bras is basically funny.

So maybe this is what I would say: imagine you’re a ‘normal’ woman with two knockers. Now imagine every bra is for women who have three. “But I’ve only got two!” you retort. So someone gives you one of the three-cup-bras and a bunch of socks to stuff the third cup with. “But I don’t mind having two” you tell them. So they give you another three-cup and a more realistic looking pair of socks. “I want to go running and those socks are going to get sweaty” you add. So, this time, they give you some sweat-wicking socks made of polyester, with a particularly adhesive strip to stop them falling out when you run. “OK”, you agree. “But this all sounds a bit uncomfortable and a bit of a faff.”

“Fair point”, they reply. “We can give you a ten-hour operation with a six-week recovery: we can remove fat from your stomach to build you a breast at the top. So, as well as being correctly triple-bosomed you’ll be thinner! Moreover, here are some stick-on nipples – they’re hand painted and may stay on your pretend breast for weeks.”

When all you want is a sports bra that fits and you’re offered a ten-hour operation instead it feels like society is invested in keeping you a certain way. I understand the cultural value of having two breasts and have enjoyed mine. I used my cleavage to ensnare a few blokes over the years. I also breastfed two children and provided a pillowy place for them to rest their weary heads on when ill. But, at the same time, I can see that part of my breasts’ value has been attached the way society fetishises them. And while there is arguably something womanly about a cleavage, there’s sadly also something womanly about the gender pay gap, domestic violence figures and sexual harassment.

I’d like to say that I walk down the street a proud Amazon, my lopsided appearance giving the finger to the patriarchy. But at the moment I am beaten. I’m having chemotherapy, I’m tired and I want to blend in.

The male gaze has crafted me a second breast that I don’t have. Maybe STEMinists, women engineers and sportswear brands will craft me the one-cupped bra for the one that I do.

The featured image shows lots of bras hanging on a washing line. The first image in the post shows the author, Diana, smiling wryly as she poses with a falsie stuffed in her orange bra, while the second shows her fully dressed in a white shirt. These illustrate the point that Diana is, in her own words, “comical in prosthesis and socially acceptable when dressed”.

The third image is of a skin-coloured prosthesis decorated in black pen by Diana’s son. The words read “James and mummy” and there are lots of kisses, shading and shapes on it.