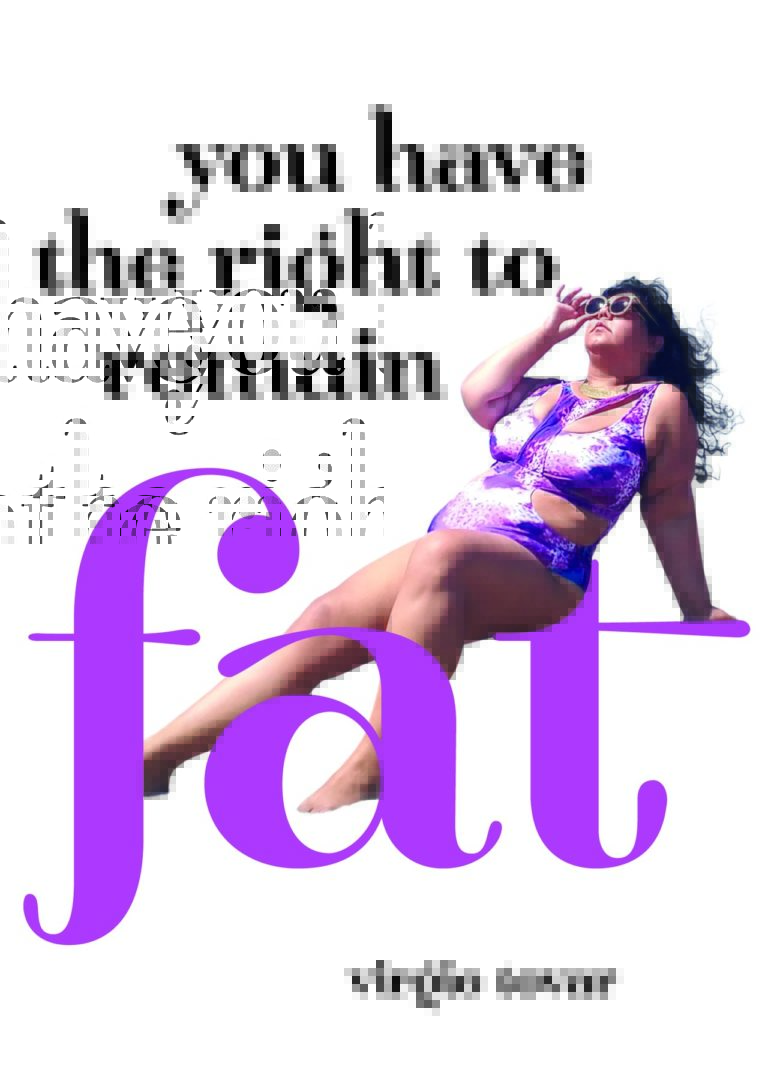 I’ve got junk in the trunk. There’s not a thigh gap in sight. To put it bluntly, I’m fat. And you know what? Virgie Tovar, author of You Have the Right to Remain Fat, says that’s a-okay. Founder of Babecamp (an online course about breaking up with diet culture), creator of the #LoseHateNotWeight campaign and all around fat girl goddess, she is smashing everything society tells fat women about their bodies.

Picture this: a little girl dancing, jiggling herself around in all her chubby glory. That’s what Tovar inspires all of us fat girls to be – completely unabashed, flagrantly in love with our own bodies and the space we take up in the world. No calorie counting or limitations on what we can do, wear or eat. However, in order to make this a reality, we’ve got to do some hard work by dismantling society as we know it, which the book goes on to explain.

Only choice selfies that hid my belly and hips could be posted online. Because of this, I have missed out on years of memories, and the photographs that preserve them

Tovar describes the years that fatphobia took from her. For nearly two decades, she was obsessed with the diets, the constant self-hatred and the idea that real life would somehow begin once she lost weight. Even when she did lose weight, the goalposts would move – no matter how much she weighed, she was never considered thin enough. She writes with such honesty that it made me angry, on her behalf and on my own. There are so many ways in which fat women are crushed by society. For years, I didn’t let family or friends photograph me, because of the way I looked. Only choice selfies that hid my belly and hips could be posted online. Because of this, I have missed out on years of memories, and the photographs that preserve them.

It was by surrounding herself with other fat women that Tovar began to understand that there is so much more to life than size. Some of the most precious moments in the book are when she takes the time to describe these women, who wear bikinis, crop tops, and live their very best lives: “I was frozen in place by the sight of them – unapologetically, blissfully living. I had never seen women like them – women like us – living without any discernible trace of shame. They were doing what I believed fat people could never do.”

However, this is not a book solely about self-acceptance. Tovar also explores the ways in which racism, classism and misogyny play a part in society’s fatphobia. She rightly states that fat women are perceived differently – and criticised more – when they are also trans, disabled or women of colour. She discusses the ways in which women are gaslighted into believing that our weight is an issue – that we will never be happy unless we are thin, and that we are to blame for society’s constant belittling of fat women.

Tovar also clears up some of the more confusing aspects of fat feminism, namely the difference between body positivity and fat acceptance. Fat acceptance is rooted in queerness and politics. It is attempting to destroy the fatphobic society that we live in. Body positivity, on the other hand, attempts to assimilate into this system. She explains: “My life wouldn’t be easier if I were thin. My life would be easier if this culture wasn’t obsessed with oppressing me because I’m fat. The solution to a problem like bigotry is not to do everything in our power to accommodate the bigotry. It is to get rid of the bigotry.”

In fewer than 200 pages, You Have the Right to Remain Fat destroys the misogynistic and fatphobic society that we live in today, with a healthy dose of fat girl power

Although You Have the Right to Remain Fat discusses many important issues in the world of body politics, there were areas that could have been analysed further. For example, Tovar discusses some of the ways in which specific advertising campaigns turn weight into a weapon, dehumanising fat people and using them as a warning, as if “their fatness were contagious”. However, this was only one specific campaign. I would have loved to have seen more about the role of the media in creating stereotypes of fat people, and fat women in particular. (There’s a reason why the fat girl never gets the guy in rom-coms, you know.) Furthermore, the book was also predominantly focused on Europe and the US. Whilst many of the observations in it were clearly based on Tovar’s personal experiences, it would have added to the book immeasurably to have different cultures’ perspectives on fatness.

However, in fewer than 200 pages, You Have the Right to Remain Fat destroys the misogynistic and fatphobic society that we live in today, with a healthy dose of fat girl power. Virgie Tovar celebrates the female body in all of its glory – love handles and all.

So go out, and jiggle with pride.

You Have the Right to Remain Fat by Virgie Tovar is published by Melville House UK.

The image used is the cover of the book. It shows the author, Virgie Tovar, looking fabulous in a bikini. She is sat with one knee bent resting on one arm. With her other hand she is adjusting her sunglasses. She has her head thrown back and her long, dark hair hangs over her shoulders. Part of the title ‘You Have the Right to Remain’ appears above her image. The last part of the title – ‘Fat’ – appears in a large, purple coloured font underneath her image and across her legs with the impression she is sat on top of the word.