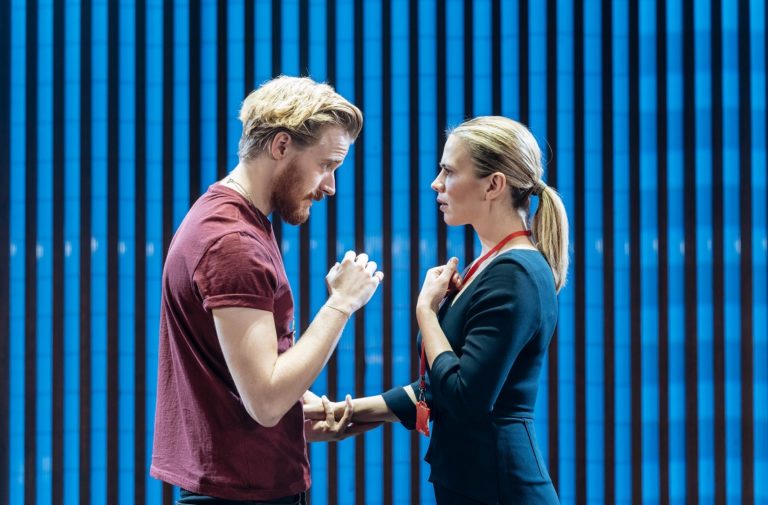 Who will believe thee?

The friendly usher who sells me my programme at the Donmar Warehouse is eager to tell me how lucky I am to be one of the first people to see Josie Rourke’s adaptation of Measure for Measure. I’ve never seen or read Shakespeare’s play, I only know the name, but I nod along, a little intimidated by her excitement.

Looking at the programme as I take my seat in the front row of the dress circle, mere metres from the stage, I am surprised to see that the evening has been split into two parts and that the second half will be a repeat of the first. I am effectively going to see the same play twice. I can’t imagine how that’s going to work but I have faith in the lead actors, Hayley Atwell and Jack Lowden, and Rourke’s ability to make it entertaining.

The stage is set with only wood panels and a single wooden bench at the front. The actors appear austere as they enter the stage through the audience in traditional Shakespearean garb. The Duke, played by Nicholas Burns, opens the story by declaring that he is going to leave Vienna, where the story is set, appointing Angelo, played by Jack Lowden, in power in his stead.

Angelo is a law-abiding, overly stringent dictator who condemns a man, Claudio, to death for getting his girlfriend pregnant. Claudio, played by Sule Rimi, is very confused since he believed himself to be married to the woman in question and actually wants to be with her. But Angelo does not care. Claudio’s sister Isabella, played by Atwell, lives in a nunnery and at the behest of Claudio’s friend goes to Angelo to beg for her brother’s life.

I instantly feel myself becoming very uncomfortable. I watch as Angelo forces himself into her space announcing in ”gross terms” that they should have sex together

Atwell commands the stage. She strides on with moral courage and a strong sense of religious belief. She speaks eloquently, almost intimately, with Angelo and I am amused, understanding why he tries desperately to get away from her as what he sees as sinful lustful feelings begin to rise in him.

The moment Atwell holds her hand against Lowden’s chest and asks him to look into his bosom and find mercy is full of sexual tension, but since I’ve read the synopsis in the programme I know what is coming. I’m cringing that a woman touching a man in a religious way will lead to such calamitous events where her agency will be reduced to nil.

Shortly afterwards, when Isabella returns, I instantly feel myself becoming very uncomfortable. I watch as Angelo forces himself into her space announcing in ”gross terms” that they should have sex together and saying that if they do he will release her brother.

As Isabella refuses, Angelo becomes fiercer and more determined, standing so close to her that their bodies are touching and holding down her wrists until he is mere inches from her face. She is sobbing loudly. It feels as if he is about to rape her, but at the last moment she is released and I, along with the whole audience, release a breath we hadn’t realised we were holding. I am furious at Angelo and horrified by the scene. Over the past few months the #MeToo movement has focused heavily on the treatment of women and men in Hollywood and other places where individual men hold a large amount of power. We have heard numerous examples of people being blackmailed and forced into sexual acts for the sake of getting a job or not losing a job; people not being believed; people losing their careers. Watching Measure for Measure the parallels between the play and the present day couldn’t be more stark.

The tension, the lack of agency for Isabella and the sheer brutality of the request is awful and only made worse when Isabella’s refusal, based on her devotion to God, is lambasted by her own brother. As she tells Claudio that she will not save him for the sake of her virginity he visibly shakes with anger, but I’m pissed at him for it and then pissed at myself too. She won’t save his life with one shag, but then why should she have to?

When the Duke returns, having meddled throughout the play, he marries Angelo off to another woman and the audience couldn’t be more delighted (although I feel for his new bride, who he has previously abandoned and ‘accidentally’ had sex with instead of Isabella earlier on). Then the Duke does another terrible thing to Isabella: he demands that she marry him. In return for ‘saving’ her chastity, the Duke insists she gives it up.

Atwell screams at him with such fury that I jump, then the scene becomes dark, hip hop music begins to play and in less than five seconds she is back before us in a bodycon dress, with a clipboard. The Duke is in a suit and staring placidly at his phone. He tells Isabella that he is leaving Vienna, she is in charge, and just like that the play is reset to the beginning but in 2018 with Isabella in power.

In the second half we see changes to the setting. Sex workers are no longer walking about and shimmying for customers but are cuddled up together with their phones, their pimp a Russian woman instead of a man. I find the recognisable situations with their everyday stereotypes more relatable than the first half.

Angelo, now in the role of Isabella, is a drug-addicted man who has entered the Cloister, a religious sect that promotes abstinence from all things to cure addictions. An early scene plays out as Lowden undresses on stage – something we did not see Isabella do, which could demonstrate a double-standard as we all goggle at Lowden in his pants – but the mood shifts when Angelo goes to Isabella to beg mercy for his brother’s life.

Isabella is not so much steadfast in her decision, basing it on her perception of sin, but is more comically amused by the fact that she has power and she is going to use it. As Angelo begs her to look into her bosom – not touching her this time around – she is aroused, although she does tries to hide it.

Strangely though, as he comes at her in a non-violent way, I’m still frightened for her. It seems any man approaching a woman, be it for a good reason or not, without their permission, frightens me. Even when the woman is in the position of power.

When Angelo returns to the stage and she announces that she wants to sleep with him, his breathing becomes heavy and he freezes in place, plucking at an elastic band around his wrist to remind him of his abstinence, unsure of what to do as she caresses him and purrs in his face. I am uncomfortable for him but it also feels unreal to see a woman coercing a man like this. It seems wrong to me as I don’t see this happening to men on a daily basis as I do with women.

I am shaking with fury, barely able to concentrate as the rest of the scenes play out for the second time. The whole play is a mind-fuck and I’m not prepared for it

I realise then what Josie Rourke’s adaptation of Measure for Measure is trying to teach me and I’m astounded.

#MeToo incorporates men’s plight as well as women’s, but we are used to sexual violence storylines with women as the victims, not men. Therefore, while it is uncomfortable to witness Angelo use sexual power over Isabella to get what he wants, I am surprised in a completely different way when she does it to him.

It’s like Rourke is in the room with me, pointing and saying: “and this is why the likes of Brett Kavanaugh are elected into the Supreme Court. Men use sexual power all the time and we’re used to it and so ignore it and move on, but if a woman did the same thing everyone would be horrified and see it as unnatural.”

I am shaking with fury, barely able to concentrate as the rest of the scenes play out for the second time that evening. The whole play is a mind-fuck and I’m not prepared for it.

Chillingly, in Measure for Measure, Angelo says to Isabella when she threatens to reveal his true nature:

Who will believe thee, Isabel? My unsoil’d name, the austereness of my life, my vouch against you, and my place i’ the state, will so your accusation overweigh, that you shall stifle in your own report and smell of calumny.

Isabella is silenced and without choice. She asks the audience directly: “To whom should I complain? Did I tell this, who would believe me?” Victim blaming and disbelief play a huge part in Measure for Measure and the very same factors began the #MeToo movement. It feels like nothing’s changed.

I applaud loudly and nod with each encore of bows but my mind is not on the cast members or even the story, it’s on #MeToo and this play’s relationship with it. Set alongside, the morals of Measure for Measure look little different to those of the present day. I even fear we’re regressing in our treatment of women and men who suffer sexual and emotional abuse. A 500-year-old play has taught me more about consent, agency and victimisation than anything else I’ve seen recently.

I leave with a nod to the usher who had been so enthusiastic before and she nods back, both of us in total agreement. Shakespeare again was ahead of his time and depicted the future 500 years ago; the Donmar Warehouse’s production shows that this play is as relevant as ever.

The featured image is a photograph by Manuel Harlan of Jack Lowden (Angelo) and Hayley Atwell (Isabella) in Measure for Measure at the Donmar Warehouse directed by Josie Rourke, designed by Peter McKintosh. Atwell and Lowden face each other and seem to be talking intensely. They wear modern clothes: Lowden is wearing a t-shirt and Atwell wears a tight-fitting dress and has her hair in a pony tail. Behind them is the blue and black striped stage set.

The image in the text is also by Manuel Harlan and shows Atwell as Isabella wearing a plain light brown cap and shapeless dress. She looks to the right and slightly down and looks like she might be deep in thought. There is a dark blue background behind her and pale blue stage light falls on the left hand side of her face as we look at her.