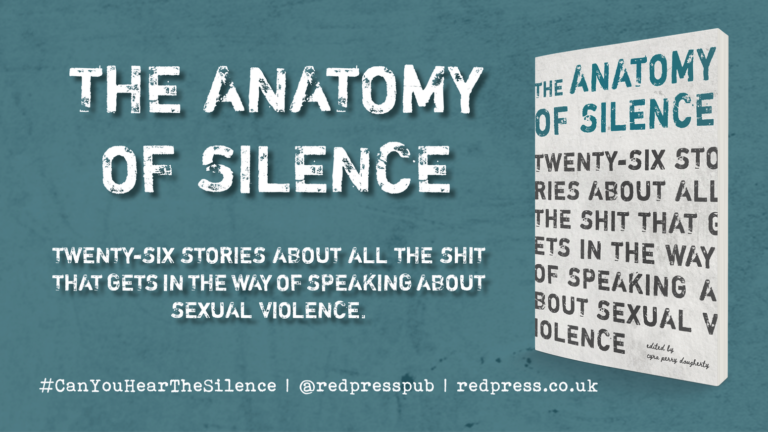 The violence in silence CN: This review contains reference to accounts of sexual violence and rape.

Since the #MeToo movement went viral in late 2017, more and more victims of sexual violence have felt able to speak out about their experiences. The more stories we hear, the more we understand the magnitude and the structural roots of sexual violence. The Anatomy of Silence is an essay collection published by Red Press, an independent publishing house with a social justice focus. The book not only contributes to this wave of storytelling but also explores the silence that existed before #MeToo. Of course, in certain instances this silence continues to exist.

The Anatomy of Silence uncovers the underlying reasons for the silence around sexual violence, and how individuals and institutions sustain it, continuing the cycle of violence. It serves as a timely reminder that we need a radical change in the way we, as a society, treat sexual assault.

Editor Cyra Perry Dougherty introduces us to the collection with her experience of rape and of learning that her partner, her son’s father, had violated someone else. It is an important reminder that a perpetrator of sexual violence can be somebody we know. Dougherty explores the territory of being “aligned with the assaulter” and choosing to believe the victim; this kind of story is rarely told, but it is an important one if we are to challenge the taboo surrounding speaking out about sexual violence. This idea is explored by Patrick McFarlane later in the book, who observes that we “maintain a lie about who it is that is sexually abusive” by convincing ourselves that it does not take place within our own circles. This book highlights how the status quo encourages people to judge and shame rather than listen and pay attention; it’s a collective call to every one of us, to change this narrative.

In the book’s first essay, Joan Kresich asks if we are willing to hear the stories of “those of us who live commonplace lives” and not just the high-profile experiences

The Anatomy of Silence contains 26 stories, exploring the silence each writer has experienced around sexual violence. These stories span experiences of childhood abuse, domestic violence, sexual assault at university and throughout adulthood, and stories from men describing witnessing sexual violence, toxic masculinity and their own complicity. Each story highlights how the silence or shaming on the part of family members, friends and other people around us contributes to a culture that makes victims feel unable to speak out.

In the book’s first essay, Joan Kresich asks if we are willing to hear the stories of “those of us who live commonplace lives” and not just the high-profile experiences. She asks if our mothers and best friends and the people in our communities are ready to listen; throughout the stories told, it is often the people close to the authors that have silenced them. The #MeToo movement was directed at perpetrators with the spotlight on those in celebrity circles, but the conversation about how changing this involves everyone was absent. This highlights how the hashtag #NotAllMen was so misplaced: not everyone perpetrates sexual violence but we all have a responsibility to challenge the dominant culture. This does not just apply to men, and it particularly applies to those with privilege; it is important to note that around half of white women voting in the last US general election voted for Donald Trump, despite his misogynistic comments.

Sexual violence is endemic in workplaces and is part of an insular rape culture in universities, as Emily Porth examines in her essay ‘Courage Calls to Courage’. Institutions prioritise their reputation, which inevitably silences victims, and this needs to change.

Ideas of education and forms of restorative justice appear as recurrent themes throughout the book. Caroline Numuhire states that men need to be taught that, “sexual violence is not a natural male thing” and to respect their partner through conversations about consent. Frederic Marx also explores this in his essay ‘Men’s Work’ in highlighting the need for men to be aware of toxic masculinity and develop their emotional intelligence, based on his own experience. In breaking their silence on sexual violence, a number of writers emphasise the importance of connecting with other people. Esther Diplock, for instance, speaks of talking circles and the healing quality of being able to share her truth in a sisterhood, and Katie Simon explores her friendship with someone based on similar painful experiences.

This idea of restorative justice comes through in stories showing how the criminal justice system also serves to silence victims. Chelsea MacMillan’s story follows her reporting of sexual harassment experienced on public transport to the police, which leads to nothing, and Michelle Bowdler tells us of 11,000 untested rape kits in the city of Detroit. Even where victims of sexual violence do not stay silent, the infrastructure we have silences them anyway.

This book is a reminder that genuine change starts at home and that we all have the potential to be complicit. We need to address how we react, the language we use, whether we call out friends or family members, the ways in which we might have ignored problematic behaviour in the past, and above all, the importance of believing victims.

The Anatomy of Silence is one step in the journey to challenge institutions that protect male dominance. It is painful to read, but it is also powerful and brave, and a reminder that we need change and, most of all, that we need to listen.

The Anatomy of Silence is published by Red Press.

The image used is the cover of the book. It is a simple cover with a grey background that has the appearance of concrete. The title and the sub-title take up the whole of the cover. The title ‘The Anatomy of Silence’ appears at the top in green font. The sub-title ‘Twenty-six stories about all the shit that gets in the way of speaking about sexual violence’ appears below the title. The editor’s name Cyra Perry Dougherty appears in the right-hand bottom corner of the cover.