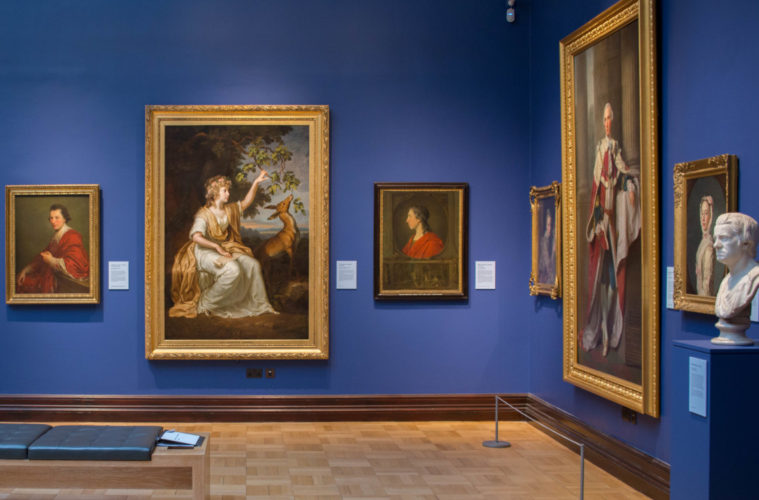 The F-Word’s museums and galleries round-up: April and May 2019

After last month’s extravaganza there are fewer events in April and May, but there’s still plenty going on. I’ve organised events and exhibitions by country, running roughly north to south. If I’ve missed out anything, drop me a comment! I haven’t had the chance to see many of these exhibitions; if you have a response to or review of one, let me know. Follow me on Twitter for more up-to-date news.

On 24 April a walk in Aberdeen celebrates 100 years of Suffrage. V&A Dundee is hosting a talk with the artist behind Rules of Play, also on 24 April. The pastel landscapes of Margaret Evans are on display from May, with a talk by the artist on 4 May. There’s loads on in Edinburgh. José Hendo discusses eco-sustainable fashion on 25 April, and Body Beautiful: Diversity on the Catwalk opens on 23 May. Workers! looks at the rights of sex workers in Scotland, while Last song for a water baby considers how relationships are formed on the dancefloor. An exhibition of the designer Orla Kiely’s work continues (pictured right), and the exhibition of abstract visual artist Senga Nengudi is on until May. The first major exhibition of Scottish artist Victoria Crowe opens in May.

In Glasgow, there’s a talk on 29 May on explorer and botanist Isobel Wylie Hutchison. It’s the final month of the photographer Margaret Tait’s exhibition, while Textiles and Activism continues at the Women’s Library; the finalists of the Women’s Hour craft prize are also on display. Bara Bara Bara, an immersive installation by Pia Camil, is her first solo exhibition in Scotland.

Three female artists are on display in Thornhill, and there’s an exhibition of textile art at the Wetlands centre in Dumfriesshire.

Women War and Peace is at Storiel in Bangor until the end of April. Katie Paterson’s interactive artwork First There Is A Mountain is at Swansea on 5 May.

Fashion designers Teatum Jones are giving a talk in Belfast on 14 May to accompany Fashion and Feminism. 100 Years of Fashion is now open at Bailiffgate, Alnwick. Barby Asante’s exhibition at Baltic in Gateshead finishes in May, where Ezuhu ezu – In(complete), the ‘Plasto-art’ of Ifeoma U. Anyaeji, begins later in the month.

In Leeds, Fifty Works by Fifty Women Artists and Helen Beard’s ceramics are on display from mid-April, while exhibitions of the colourful prints of Lucy Ketchin and the mineral biography of Ilana Halperin both finish in May. There’s a talk on Magdalene Odundo’s exhibition at the Hepworth in Wakefield on 4 May. Kimsooja’s installation at Yorkshire Sculpture Park (pictured left) is now open. The final part of The Grief Series features artists from both Yorkshire and Mexico City to explore loss, with a number of events in early May.

In Manchester, contemporary artists the Singh Twins feature in the exhibition for the centenary of the Jallianwala Bagh massacre. The People’s History Museum is hosting Remembering Resistance on 27 April, celebrating a century of women’s protest, and a talk on the gender politics of Hilma af Klint’s art is on 1 May. There’s a panel discussion on 18 April of Facing Out, the exhibition of Lucy Burscough’s portraits of facial cancer, and an audio-described tour on 14 May; Zoë Law’s photographs of cancer patients are also on exhibition from mid-May.

Recollecting, the exhibition by multimedia collage artist Sylvie Franquet, is now open in Nottingham, alongside the work of jeweller Romilly Saumarez Smith (who’s giving a talk on 31 May). At Nottingham Contemporary, Elizabeth Price’s video installation FELT TIP finishes this month, to be followed by the retrospective of filmmaker Liz Rhodes, Dissident Lines. In Leicester, Emii Alrai’s installation House of Teeming Cattle explores forms of personal and historical identity between the Middle East and Britain.

In Birmingham, Too Cute! by Rachel Maclean finishes in May. There’s a talk on the famous statue of Queen Victoria on 24 May, and a tour of women’s work in the jewellery quarter on 25 May. The exhibition on photographer Nyema Droma continues at the Pitt Rivers, Oxford, with an evening of talks on 27 April. The woodcuts of Naoko Matsubara are now on display at the Ashmolean. It’s the final month of the photographer Diane Arbus’ exhibition. Mali Morris’ works on paper are on exhibition at the Royal Academy, with a talk on 9 May. A major exhibition of the designer Mary Quant (pictured right) is now open at the V&A, with a subtitled talk on 17 May. Lili Dujourie looks at the way nature inspires her poetry and art in Ballade until late May. Hito Steyerl’s exhibition at the Serpentine is now open, exploring the digital world, art and capitalism.

Further out from the centre, Haegue Yang is giving a talk to accompany her exhibition at Dulwich Picture Gallery on 15 May. In Richmond, The M Word explores the link between pregnancy, creativity and mental health for a fortnight in early May.

In women’s history, Feminism in Camden in the 70s and 80s ends this month. An Unsuitable Game opens at the British Library on 14 May, looking at the history of women’s football, with a talk on 20 May. Two displays are opening at Kensington Palace on Queen Victoria, on her childhood and her private life.

The RA’s Festival of Ideas has a number of interesting events, including talks on 4 May with the artists Jane and Louise Wilson and cartoonist Posy Simmonds, and a talk on the future of feminism on 5 May.

Other talks in May include:

In Brighton an exhibition on the naturalist and artist Mary Merrifield opens in May. It’s the final month of both Royal Women and Louise Bourgeois’ prints in Bath. A conference on photography in Somerset ends with a talk from Matilda Temperley, whose photographs are currently on display.

In Bournemouth, Indian Summer considers the paintings of Felicity House and Billa Edward, while Misattribution explores the reattribution of the painting Aurora Triumphans to Evelyn De Morgan. In Exeter, the exhibition of female artists at the Royal Albert Memorial Museum continues, with a dementia-friendly tour on 16 May. Margareta Kern is in conversation in Plymouth on 9 May to accompany The Unknown Knowns, which “exposes hidden truths and ask questions about the world we live in”. At Plymouth History Festival in May there are talks on Lesbian history, Nancy Astor and prostitution.

Both Anna Boghiguian and Amie Siegel’s exhibitions at Tate St Ives are finishing this month. In Newlyn, Magda Stawarska-Beavan, Rebecca Chesney and Lubaina Himid “consider the poetic investigation of place, space and time” in Invisible Narratives, while the prints of Shelly Tregoning explore “physicality and the interpretation of human gesture”.