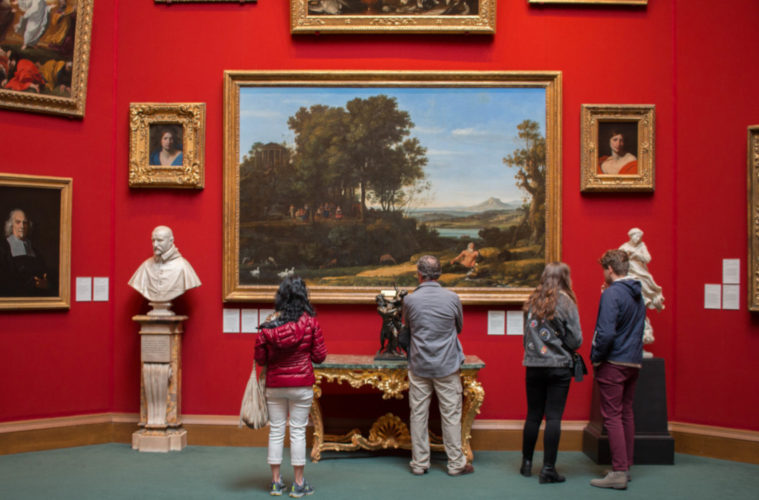 The F-Word’s museums and galleries round-up: May and June 2019

Welcome to this month’s round-up! As before I’ve grouped things regionally roughly north to south. If I’ve missed out anything you think should be included, drop me a comment. I haven’t had the chance to see many of these exhibitions; if you have a response to or review of one, let me know. You can also follow me on Twitter for more up-to-date news. As well as a talk on local “Women Trailblazers” on 29 May, Katie Paterson’s travelling participatory artwork First There is a Mountain reaches Aberdeen on 23 June. At V&A Dundee there’s an embroidery course with Scottish designer Chloe Patience on 1 June, and Orla Kiely is giving a talk to accompany her ongoing exhibition (pictured right) on 14 June. Liz Dulley is exhibiting paintings inspired by her time in Japan for a fortnight in early June, while the tribute to textile artist Marion Stewart is now on display until July.

In Edinburgh, Body Beautiful: Diversity on the Catwalk opens in late May, as does the exhibition of the career of painter Victoria Crowe. The Long Look explores the relationship between portrait artist and sitter, with the artists in conversation on 28 May. Anya Gallaccio is also giving a talk to launch her exhibition on 31 May. Bridget Riley’s abstract paintings are on display from 15 June, with an accompanying curator’s talk. There’s also a talk on influential Bauhaus artist Edith Tudor-Hart on 11 June.

Both Women’s Words and Textiles and Activism finish this month at Glasgow Women’s Library. Cornelia Parker’s investigations of photogravure are now on display. An exhibition on Anne Frank opens on 7 June, and The Glasgow Science Festival includes a talk on women in engineering on 12 June.

First There is a Mountain reaches Llandudno on 19 May. The group Merched Chwarel explore the traditionally-male mining sphere at Storiel, Bangor, while Rumblestrip considers “subsequence and consequence” in Cardiff.

Cathy Moore’s jewellery is on display alongside the ceramics of Karen McComiskey in Armagh, while paintings of the Irish landscape by Mary Doran are on exhibition in Newry. Ifeoma U. Anyaeji is giving a talk in Gateshead on 26 May to accompany the opening of her exhibition Ezuhu ezu – In(complete), which explores traditional West African craft processes in her ‘Plasto-art’. On 18 May Emma Stibbon discusses her work in Ruskin, Turner & the Storm Cloud at York Art Gallery, and there’s a talk on 6 June about Queen Charlotte’s fan.

Unmanaged Reproach, Claire Bentley-Smith’s investigation of “the debate, dilemmas and difficulties around inner city living”, opens in Leeds on 17 May. There’s a talk on 22 May on the work of Renee So to accompany the end of her exhibition at Henry Moore. On 1 June there’s an opportunity to meet some of the artists behind Rings, and on 8 June the Brontë Society is hosting a talk on Regency lesbian diarist Anne Lister (who you can find out more about here). You can explore the lives of women above and below stairs at Burton Constable in Hull, while A Tittle-Tattle Tell-A-Tale Heart combines the use of free-standing sculpture, sound installation, costume and performance.

It’s the final month of Facing Out (pictured left; read my interview with Lucy here) and Life in Manchester, both of which explore life with and after cancer. A number of exhibitions are also opening in June:

In Liverpool on 18 May there’s an introduction to the Suffragettes, and Women of the World tours explore world-changing women through May and June.

In Nottingham Sylvie Franquet discusses her exhibition reCollecting on 25 May, which draws inspiration from the objects collected by the Duchesses of Portland. There’s also a talk on the work of jeweller Romilly Saumarez Smith on 31 May. Liz Rhodes’ retrospective Dissident Lines launches at Nottingham Contemporary on 24 May.

Body Image and the Self explores how social, historical and cultural factors affect body image in Birmingham, while Pure Pleasure looks at the “desiring female gaze”. There’s a talk with creative Polish women on 31 May, and regular tours of women in the jewellery quarter are running on 25 May and 29 June.

Mothers Who Make in Coventry invites creative women to explore their practice with peer support. It’s the final month of Performing Tibetan Identities in Oxford, an exhibition of Nyema Droma’s photography. I Came to Dance opens in June, featuring the “intimate, powerful and sometimes deliberately uncomfortable” studies of black men and women by Claudette Johnson. There’s also a talk on the pioneering geologist Igerna Sollason on 21 May.

In Norwich the regular female voices tours of the Castle continue, and there’s also a talk by the photographer Susan Meiselas on 25 June. The contemporary artist Jo Tunmer’s first solo exhibition is now open in Cambridge, while the ceramicist Jennifer Lee has put together a display of items from the Fitzwilliam which resonate with her. Conceptual artist Sutapa Biswas is part of a discussion on art and heritage on 22 May, and there’s also a talk on a bust of Queen Victoria. It’s a busy couple of months in London. It’s the final month of Dorothea Tanning’s exhibition at the Tate Modern, to be followed by the first UK retrospective of the avant-garde Russian artist Natalia Goncharova (pictured left), with a curator’s talk on 24 June. Both Faith Ringgold’s exploration of African American identity and gender inequality and the “unexpected perspectives” of Luchita Hurtado are on display at The Serpentine from June. The pioneer of abstract expressionism Lee Krasner is featured at the Barbican, while Richard Saltoun’s ongoing rotation of female artists features the avant-garde performance art of Gina Pane. Kiss My Genders opens at the Southbank Centre on 12 June, exploring gender, beauty and the human form across a variety of media.

A number of exhibitions explore photography and portraiture. Emma Hopkins has made the shortlist for the BP Portrait Award 2019. Nina Mae Fowler’s portraits of film directors are now on display until October, while the retrospective of photographer Cindy Sherman opens in June. Misbehaving Bodies brings together the work of Jo Spence and Oreet Ashery to explore how illness affects perceptions of the body.

Further out from the centre, Women on Screens explores the radical visual imagery of the Lenthall Road Workshop in Hackney from 1970-1990. Nahoko Kojima’s eight-metre-long paper crocodile is on display at Dulwich Picture Gallery from 19 June. If You Know The Beginning, The End is No Trouble, Liz Johnson Artur’s photographs of people throughout the African diaspora, runs at South London Gallery from 14 June, while Susan Cianciolo’s multimedia installation spans two floors there from 21 June.

As usual, there are also a number of one-off events.

An exhibition of the illustrator Lauren Child is now open in Bath. The audio installation by Leona Jones is on display at the Museum of Bath at Work from 25 May.

Moment, an installation of oil paintings of Poole Harbour by Sarah Hough, is now on display. It’s the final month of Exeter’s display of women artists, while an exhibition of the mosaics of Elaine M. Goodwin continues until the end of June. Brigitte Caland discusses the life and work of her mother, the painter Huguette Caland, in St Ives on 24 May. Solitude, an exhibition of paintings by Lucy Willow exploring wildness and isolation in landscape, is on at Newlyn until mid-June.

Header image via Flickr. It shows a group of people looking at paintings in gold frames on a bright red wall. First inset image via Facebook. It shows a gallery space with patterned dresses hanging from the ceiling. Second image with kind permission of the artist. It shows a smiling man with a growth on his face against a black background. Third inset via Flickr. It’s an Impressionist-style painting of a woman holding a bunch of flowers. Fourth inset via Wikimedia Commons. It shows an aristocratic woman in a pale pink dress holding a painter’s palette.