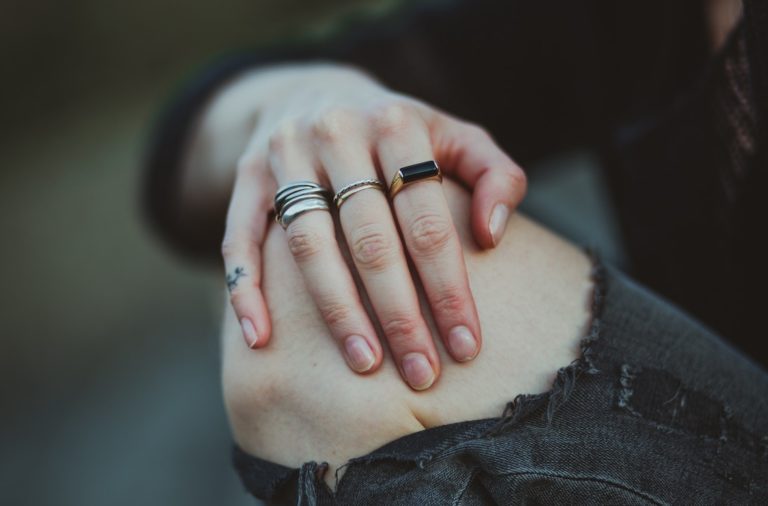 Women around the world at work: introducing She’s A Punk

“I wanted to talk about everyday punk rock women” says Siobhan Woodrow, host of the podcast She’s A Punk. She is interested in the musicians, but she also wants to tell the stories of punk women who aren’t musicians, and to showcase the work they are doing. “I just wanted to speak to people that were not having their stories told,” as she puts it. “How else are we going to hear about the feminist queer wrestler unless I tell their story?” She feels that the podcast resonates with listeners because “We feel connected to one another. That’s not an opportunity that a lot of alternative women get to have.”

Woodrow is based in Ontario, Canada so our Skype interview takes place 11pm my time, 7pm her time. When she comes on screen, fresh from her day job presenting and programming at Ontario’s rock station 97.7 HTZ-FM, I can see that she is both younger than I expected (Woodrow has a particularly low speaking voice, making her sound older than she is while giving her the air of a punk rock Jodie Foster) and eager to talk. Her red hair, tattoos and piercings give the overall vibe of a young Joan Jett with Shirley Manson colouring. She is very punk rock.

Woodrow has never made a podcast before and she’s finding that it’s a “very, very different beast” to radio, “especially because I’m a one woman show.” She selects her own guests and does all the research, editing, production and voiceovers herself. When it comes to finding interviewees, “I always cold call people, and I just hope that they say yes and they basically always do.”

Interviewees so far include Talli Osborne, Lisa Pereira, Urvah Khan and Liz Ham. Woodrow has also found that approaching and interviewing one woman, can lead to her being introduced to future interviewees for the podcast:

Woodrow is very animated as she discusses this phenomenon; she has clearly been deeply inspired. “It’s just a really amazing domino effect of women being like: ‘I support this woman, I know her, I vouch for her, she’s incredible,’ and it’s just everybody lifting everybody else up.”

When I ask her who she would most like to interview for She’s A Punk, she admits that, despite her desire to look at punk beyond music, her ultimate interviewee is “always gonna be Patti Smith”. She laughs as she adds: “That’s just in my wildest dreams.” Laura Jane Grace and Brody Dalle would be on her list, but she’d also love to interview Roberta Bondar, the astronaut and first Canadian woman to go into space.

As her desire to interview Bondar suggests, Woodrow’s interview remit is wide and varied. For her, punk is essentially about spirit and, as long as her interviewees have that punk spirit, she’s up for interviewing “anyone who’s not a cis male.” Bondar, to Woodrow’s mind, is “so punk rock”, and she would like to get more “activists and scientists” onto the podcast, people that “you wouldn’t expect on a punk rock podcast; that’s really important to me”.

“I think it’s really interesting to think about how punk influences other elements of who we are,” says Woodrow. “It influences how we vote, how we socialise, how we eat, how we deal with the environment. You know, punk rock has such a ripple effect through our lives.” And, as she says, it might not always be the music that first attracts young women to punk – it might be the politics. “And wherever that may bring them, hopefully, it brings them to a place where they feel included and heard.”

Her interviewees so far have come from Canada, the USA, the UK and Australia, but the beauty of the internet, and podcasting, is that it brings punk communities from all around the world together, something Woodrow is very excited about.

“I’m kind’ve interested in Indonesia,” she says when I ask if there are punk scenes in other countries that she’s particularly like to find out about. “Because they have a really cool punk scene, but I don’t know what it’s like for women. So I’m curious.” She goes on to add:

It’s so cool to think about how punk rock is supposed to represent a group of marginalised people, but you are doubly marginalised when you are a woman in the subgenre, and again if you’re a woman of colour in a subgenre. The layers continue and continue, so it’s really interesting to see the status of women, not only in punk rock around the world, but definitely in countries where women have a harder time, especially claiming their feminist identity as well.

Woodrow got into punk when she was very young, but doesn’t feel that her route into the scene was unusual. She feels that there are a series of universal themes that run through pretty much every punk introduction story:

It always comes from being an outsider; it always comes from ‘I didn’t fit in’; it always comes from ‘I was bullied at school.’ It’s always the same. They had an older cousin who gave them a tape one time, or they were watching music television when they were young and saw The Clash on TV. It’s always the exact same story, and mine is no more interesting than that. [I] was picked on when I was a kid; I felt very much like an outsider. And then I found out who the Ramones were. And those two things, they just collide with each other and you find your community. It’s my story and it’s all of their stories.

In her early 20s, Woodrow, who has always been “a multi-hyphenate kinda gal” expressed her punk-fuelled creativity through drawing, photography and making fanzines. She went to a lot of gigs, was very into ‘zine culture and all her writing, photography and drawing went into her ‘zines. It was a time-consuming but cheap creative pursuit.

The podcast is her current outlet for her punk creativity, and it has brought her full circle. Audio “democratises art because anyone can do it”, she explains. “It’s so cheap to buy a microphone, and we can all connect to each other for free. So it makes it accessible to everybody.”

Meeting and interviewing the women she has met through the podcast has been a very inspiring experience, and she’s determined to keep the podcast running indefinitely. “It’s a lot of hard work,” she admits “but I really, really enjoy it.” The women she’s spoken to have given her so much. “I will always come out of it feeling like a better person for having spoken to them. I feel more enlightened; I feel like I’m trying to become a better ally. I’m becoming a better person, a better friend, a better sister, a better daughter.”

Her ambitions for She’s A Punk have always been simple and uncomplicated. It’s about connection and community. The podcast is for “anyone who feels a little bit low, or a little bit disconnected, or feels like they don’t have a community”. She hopes that: “every two weeks when a new episode comes out, you feel excited, because you feel like your friends are here. And that’s all that She’s A Punk was ever supposed to sound like and feel like. Like: ‘Oh man, my friends are here!’”

Image one: Image of a hand with rings and tattoo resting on a knee that can be seen through ripped jeans by Jasmin Schreiber on Unsplash

Image two: The She’s A Punk podcast log. Image is white writing in a box outline on a black background. Image used with permission.

Image three: Siobhan Woodrow. She is facing the camera, has her arms folded and her head is tipped slightly to the left. Her facial piercings and arm tattoos are visible.