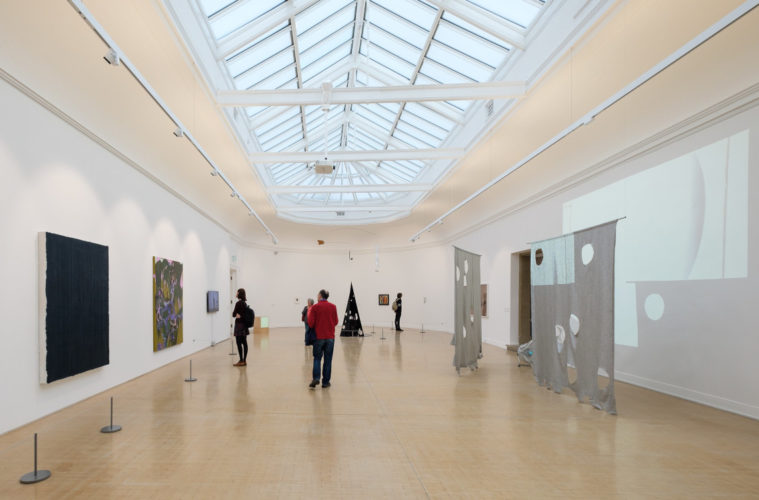 The F-Word’s museums and galleries round-up: July and August 2019

Welcome to the round-up covering UK museums and galleries for July and August! I’ve grouped things regionally running north to south so you can jump straight to the section that’s local to you. If I’ve missed out anything you think should be included, please do drop me a comment. I haven’t had the chance to see many of these exhibitions; if you have a response to or review of one, let me know. On the Edge, an exhibition of artists belonging to the Scottish Glass Society, is now open in Lybster. A touring exhibition from Equality Council UK is on display in Aberdeen, where you can also see Stacey Hunter’s exploration of Japanese design. In Dundee, Pam Kelly looks at the Art of Work, and the nineteenth-century artist Charlotte Nasmyth is among those on exhibition at the Tower Foyer Gallery.

Body Beautiful: Diversity on the Catwalk continues in Edinburgh, as does the first major exhibition of contemporary artist Victoria Crowe. Tie-in events for the latter include talks by poet Christine de Luca, weaver Naomi Robertson and gallery director Guy Peploe, as well as a descriptive tour and a creative writing event. On 18 July painter Audrey Grant is giving a tour of her joint exhibition (her hands pictured right) at National Galleries Scotland. Cartoonist Kate Charlesworth is in conversation on 23 July, and the chief curator is giving a talk on abstract painter Bridget Riley on 31 July.

In Glasgow, Home Where Home Is Not re-imagines fixed notions of home through working with Glasgow Women’s Library, while Portraits of People includes Rosa Lobato’s ‘peoplescapes’; both finish in early August. The Linda McCartney retrospective continues at Kelvingrove, while Rachel Adams and Tessa Lynch consider the ‘women’s work’ of craft and the household.

At the wetlands centre in Caerlaverock, Marsh Song is replaced on 27 July by Modern Wilderness. Both exhibitions feature contemporary Scottish artists’ exploration of the local landscape.

Ann Bridges’ exhibition in Llandudno explores her travels in the Far East. Work of the Modern Quilt Group is on display in Bangor, where you can also see Sian McGill’s exploration of the Welsh landscape. On 26 July in Newtown Stephanie Jane opens the exhibition of her designs for Liberty’s.

In Aberystwyth, Sea Gold features sculptures made from beach-combed materials, and there’s an exhibition of Jean Napier’s Welsh landscape photography. Elaine Graham’s paintings are on display for a fortnight in August in Aberglasney, and there’s a talk on the first female US Senator in Cardiff on 9 August.

‘Maggie’ – A Family History Exhibition in Larne tells the story of nineteenth-century local Margaret Scott and four generations of her descendants. On 18 July in Newcastle there’s an evening of South Asian short films looking at “freedom, desire and resistance”. Sounds Like Her in York brings together the work of seven female artists to explore the medium of sound, with a curator’s tour on 21 August.

In Leeds, Yorkshire Sculpture International features the work of several contemporary female artists; the sculpture of Nika Neelova is also on display at the Tetley, with a director’s tour on 24 July. Ceramic Showcase finishes this month at Craft Centre Leeds, where Lesley Birch’s exploration of the Irish landscape is now open. The Doffer and the Fancy is a series of sculptural works inspired by textile machinery. Fisherwomen looks at the history of women in the fishing industry in Hull from late August. Sheila Meeks’ landscapes are on display in Saddleworth, and there’s a curator’s tour of the Victoria Wood exhibition in Bury on 23 August.

Pattern and Resonance finishes this month at HOME in Manchester, replaced by Always Mysteries of the Tongue, Aliyah Hussain’s ceramics exploring communication and miscommunication. On 31 July the Singh twins are giving a talk on their work in the Jallianwala massacre exhibition. Women, Power, Politics on 7 August looks at exploring gender through “dialogue and critical thinking”, while the Pankhurst Centre is hosting Remembering Resistance on 15 August. You can also now hang out with a LEGO Suffragette at the People’s Museum (pictured left).

In Wigan on 16 August there’s a talk on Leigh and Wigan’s Female Reform Unions, while Disability Stockport is looking at the history of women and disability on 18 July. Sol Calero’s colourful installation is now open at Tate Liverpool. On the Isle of Man, Linda Huxley’s local landscapes are on display until the end of the month, while Beauty and the Beach explores the changing shape of swimwear alongside changing attitudes towards the body.

At Nottingham Contemporary, there’s both a talk on the feminist moving image on 25 July and a tour on 28 August by Emma Cocker to accompany the current Lis Rhodes exhibition. In Leicester, Collette Rayner explores ‘un-reality’ and the future through drawings and animation.

Reality and imaginary collide in Coventry, while in Milton Keynes the work of Paula Rego is on display, exploring violence, gender discrimination and political tyranny. Performing Tibetan Identities finishes in Oxford at the end of July, where you can also see a display on Jewish folklorist Ellen Ettlinger.

In Norwich, the exhibition on Princess Sophia Duleep Singh finishes on 3 August, with a talk on 25 July. Nancy Jane Burton’s watercolours are on display at the South Asia collection, while an exhibition of Magdalene Odundo’s ceramics opens in August. Jennifer Lee’s pottery is now on display in Cambridge, with a curator’s talk and the artist in conversation – and, if you’re feeling particularly flush, for £175 you can learn the Japanese art of Kintsugi with Iku Nishikawa. An exhibition on Helene Schjerfbeck, “one of Finland’s best kept secrets”, opens on 21 July. Penny Slinger’s Tantric art is on display until the end of August.

In abstract art, the work of Hungarian artist Dóra Maurer is on display at the Tate Modern from 5 August. The exhibition on the pioneer of abstract expressionism Lee Krasner continues, with tours by the curator, exhibition assistant Charlotte Flint and art historian Anne Wagner; friend and art curator Ruth Appelhof is also discussing her upcoming memoir Lee and Me.

In women’s history, Rise of the Lionesses (pictured right) looks at the history of the Women’s Royal Army Corps, while Women on Screens explores the radical visual imagery of the Lenthall Road Workshop in Hackney. A special display on the wives of Henry VIII finishes at Hampton Court at the end of July.

Events in July include: Brighton-based artist Beth Walker presents ‘Devenir’ for a weekend in July, “a joyful exploration of growth, life, rhythm and renewal through moving image”. Putting Ourselves in the Picture is an accessible artist studio led by Sara Dare, Annis Joslin and Jo Offer. Moment finishes on 3 August, featuring a series of paintings by Sarah Houghton of Poole Harbour.

In St Ives, there’s a curator’s tour of the exhibition of Lebanese abstract artist Huguette Caland, as well as a talk by founder of @thegreatwomenartists Katy Hessel.