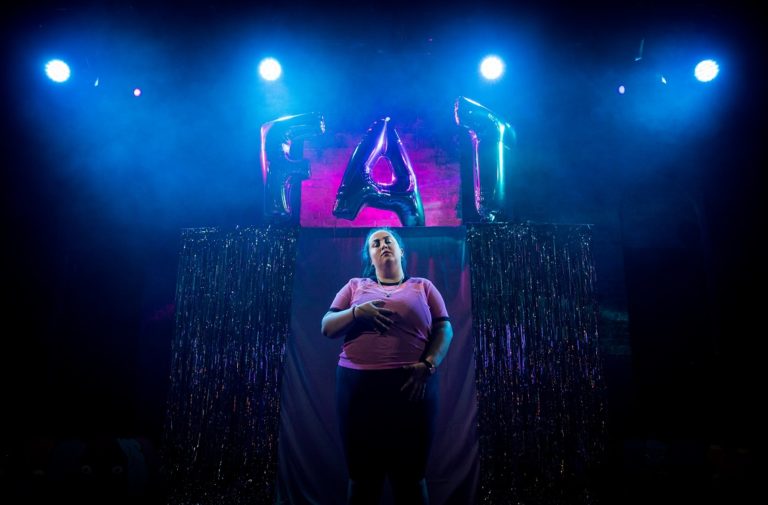 Beyond: Sugar Mice (Theatre)
Until 16 August, 15:20, Paradise in Augustines
Reviewed by Emily Zinkin

Al was dropped off in a cradle at the doors of a Methodist church with only a stack of CDs: some terribly cheery American-Italian albums and one Bob Dylan CD. She swings between thinking the Dylan CD must have great personal meaning and that it might have been left by mistake. In the meantime, a life spent staying as far away from people’s attention as she can get so as not to be stepped on means that she can’t even correct her co-worker when they call her the wrong name and she overly identifies with a mouse.

Al’s journey of small but mighty personal victories and set-backs has you cheering for her and makes you think about all the people who slip through the cracks, but her somewhat joyless life does at times make this show a little dour. Mouse is a gregarious character who brightens up Al’s life and our viewing experience, though I am a bit confused for a while whether she is an actual mouse or a person called Mouse.

The blossoming love affair between Al and Buzz is a touching and heartfelt element I would have liked to see more of than a montage, but their endurance and love for each other is moving. The plot twist is shocking and well done, and really brings a whole new element to the show that has my heart in my throat. The blurring of reality and Al’s perception is really interesting, and I like that of Al’s many issues being queer is not one. Lois is a shit-kicking superhero who doesn’t take anything from anyone. She is also what Lucy was going to be called until her parents decided “Lucy” was the name for her. Join Lucy on her high-energy journey to create the woman she might have been if she had been called Lois (therefore becoming a generally cooler individual).

The action hero devices and narrative are highly entertaining; the audience participation made me laugh and Farrett deserves credit for keeping up the pace, the punch and the jokes. The relish with which she embraces the slightly awful tropes and simultaneously demonstrates how silly they are is lovely to watch.

There are some jokes and plot points that I can see were funny when they were conceived but need a little more explanation, and there are parts that might benefit from a bit more workshopping before the show’s next outing, but I hope Lois gets this additional work done and continues to thrive. I really love the ultimate message of the show: that trying to think about what an ideal version of yourself would be is a terrible use of brain space and quite a toxic exercise, so just try to have some fun with your life. Stiff & Kitsch: Bricking It is one of those charming but bizarre shows where you want to laugh because the performers want to cry. It focuses on the year since the last Edinburgh Festival Fringe where they got black-out drunk, building up to performer Sally O’Leary’s 30th birthday party, with a 24-hour holiday, Catholic contraception education fails and several conversations with their anxiety in between.

There is an unflinching honesty about creeping fears both personal and global in Bricking It which really resonate with me. The show invites the audience to share in universal truths we often conceal from others: the best night is often one spent alone, almost none of us are where our parents were at our age and we may die alone.

The anecdotes and songs are simultaneously charmingly domestic and frighteningly real, and each section segues into the next with a smoothness that leads me to not question what it’s all leading up to. It then wraps up beautifully at the end with a realistic low and then a moral and song that leave me uplifted and ready to face the world again with a smile.

There’s a poignant segment in which she addresses public eating and another when she recreates a doctor’s visit with help from an audience member. These experiences could be about anybody, but Greenall puts her own body on the line to show that things happen differently to a fat person Flora Anderson likes the Romantics. Not in the sense of people with a sense of romance, but the classic Romantics who believed in art as radical self-expression (and sexed their way round Europe in the 19th century). She started practising this through participating in many university plays, but she tells us it’s proved harder to maintain since moving to London.

Anderson takes us on a tour of post-university life, privilege and trying to maintain your ideals and dreams while also facing the London housing market. She skilfully weaves together topics from being called a witch by her boss, the difference between fur and face in the world of Disney and which poets you would fuck, marry or kill.

While the latter end of her show is slightly slower paced and feels like it lost its way a bit, I enjoy her style of contemplation and the way she tongue-in-cheek pokes fun at herself while not shying away from some painful aspects of reality. Her more serious note at the end is unexpected, but brings a depth to her set and rounds up the variety of subjects she has meandered through. Her callback ending nails the tone and leaves everyone laughing. Andrea Spisto makes a show about what she knows best – herself – and what an interesting person she is! If it is the dream that makes a person, it is fair that there are many people in Spisto – she possesses many dreams and as many skills. She clowns, sings, dances, raps, mops and wants to be as many things as she is told she must be – and challenges each and every one of them. Spisto is on fire: the show is a festival, there’s not a moment wasted in the hour and, when it ends, we have been given many facets of her life and may have even found forgotten facets of our own.

Butch Princesa is, as Spisto says, a “surreal queer immigrant wonderland”. Or it is her honest attempt to find her many selves along the way that inspires us to wonder about our own, to dig deeper to bring out the buried parts of ourselves and to celebrate them all. It most definitely is an invitation to take a trip and to dream up new versions of ourselves. Butch Princesa is Andrea’s story of finding herself, dreaming when all else fails and fighting to keep dreaming. Katie Greenall is a rock star. She is a spoken word poet, actor, performer and storyteller; she could also be a standup comedian or a game show host. She is fat and uses all the hats she wears to talk about living in a body that she, and many thousands of other people, have been taught to hate. Greenall tells stories accompanied by photographs of her at the age each vignette is from. These are interspersed with a “guess the number of” game and a version of the popular party game “never have I ever” that replaces alcohol shots with crisps. There’s a poignant segment in which she addresses public eating and another when she recreates a doctor’s visit with help from an audience member. These experiences could be about anybody, but Greenall puts her own body on the line to show that things happen differently to a fat person.

Greenall is honest and hilarious, and the show is an ode to the fat experience as much as it is a fight and a tool to end fatphobia. “Fatty Fat Fat”, says Katie at the end of show, “helped reclaim my fatness”. It is evident from the tears in some people’s eyes that the show has also helped them reclaim theirs. If applause from the audience is her protection, then it is her words that are her tools – and they are powerful, political and proud.

Image 1 is from Beyond: Sugar Mice. It is a shot from the chest up of the two performers. One is standing behind the other and has her arms around her. They both look worried. It’s quite a pale photograph: they’re in a room with white walls and both have pale skin.

Image 2 is from Lucy Farrett: Lois and shows the performer standing in front of a light blue background. She is wearing tight black clothes and a blonde curly wig. She holds two blue water-pistols in her hands and is looking towards the camera as if she might “shoot” us. She also has a quiver of plastic arrows on her back and a blue plastic bow can just be seen over her far shoulder.

Image 3 is from Stiff & Kitsch: Bricking It and is a full length photograph of both the performers standing next to each other in front of a light blue background. The one on the left wears a yellow dress and jacket and holds a red balloon. The one on the right wears jeans, a denim jacket and a zebra print top. She also holds a white balloon and is holding something that might be a pencil up to her mouth. They both look a bit surprised.

Image 4 is of Flora Anderson and is by Steve Ullathorne. It shows her sitting down and looking upwards in front of a pale pink background. She is wearing blue jeans and a white t-shirt and has very pale hair and skin.

Image 5 is from Butch Princesa and is by Jahel Guerra. It shows performer Andrea Spisto in a crouching position in a photographer’s studio. She wears white shorts, a blue bra and has a crown on her head. She looks upwards and to the right of the image. She has long dark wavy hair and hairy legs. The floor of the studio is covered with a golden cloth and the background to the image is pink.

Image 6 and the feature image is from FATTY FAT FAT. It shows performer Katie Greenall standing on a dark stage. She wears a pink top and black cycling shorts and has her hands on her body. Her eyes are closed. Behind her on the stage are glittery curtains and helium balloons that spell out FAT.