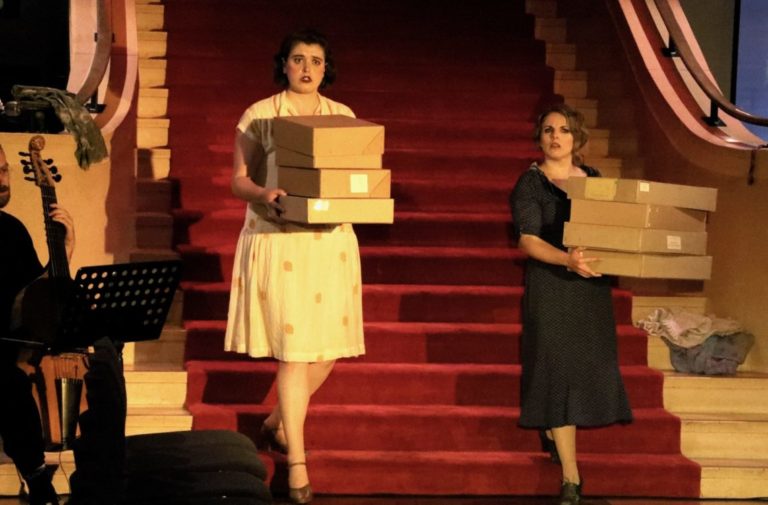 This month’s round-up is earlier than I usually manage in the month but still at least one of the shows I want to highlight has already opened, so let’s crack on!

What Girls Are Made Of, a gig theatre production of Cora Bissett’s true coming-of-age journey has already opened and is at Soho Theatre until 28 September. The show asks what wisdom we should pass on to the next generation – and which glorious mistakes we should let them make.

Scottish writer and poet Jackie Kay’s personal memoir, Red Dust Road, has been adapted for the stage by Tanika Gupta. This new show directed by Dawn Walton will be at HOME in Manchester from this Wednesday until 21 September having already toured to Stirling and Inverness. U.S. comedian Liza Treyger is just about to go on tour across Europe with UK dates in Bristol, Brighton, Birmingham, Salford, Southend and London. She is described as being: “renowned for debauched stories and tales of raucous nights out; she blends millennial party animal anecdotes with her trademark self-aware attitude”.

Esmond Road Productions, a feminist theatre ensemble from London, Montreal and New York, is putting on The Bacchae by Euripides at the Bread & Roses Theatre in Clapham from 17 until 21 September. With a focus on classical theatre, Esmond Road Productions are looking to shift the way we see gender in a classical setting, as well as shed light on the very modern social themes and mental health issues already existing in classical pieces.

The grand final of the Funny Women awards will be at the Bloomsbury Theatre, London on 19 September. The finalists are Celya AB, Kemah Bob, Sian Davies, Charlie George, Liz Guterbock, Jen Ives, Helena Langdon, Sarah Mann, Shelf and Laura Smyth and it is hosted by Katy Brand. Good luck, everyone!

Dear Marie Stopes is a new opera being performed at Kings Place in London on 21 September. It’s based on an archive of emotionally-charged letters sent from the public to birth control pioneer Marie Stopes, in response to her 1918 sex manual, Married Love. Alex Mills the composer writes about the opera’s link with current abortion laws here.

Queens of Sheba which we reviewed in Edinburgh last year is going on tour. The show is based on a real incident at the DSTRKT Nightclub in 2015 when four women were turned away for “being too dark“. The show visits Harlow, Manchester, Nottingham, Derby, Sheffield, Bristol, Coventry, Battersea, Colchester and Slough.

Running from 1 until 27 October, Omnibus Theatre in Clapham presents its fifth annual Perception Festival. This year’s theme is Nasty Women. The festival explores the perceived notions of femininity and womanhood in a rich and riotous range of voices. It includes I’d Rather Go Blind which examines motherhood within a claustrophobic criminal justice system.

RedCape Theatre’s new dark comedy Thunder Road is a blend of standup/compering, physical theatre and new writing. It tells the story of two women, Maureen and Sylvie, who embark on a First Aid training trip. The story confronts themes of domestic abuse, the curbing of female ambition and the portrayal of women in crime dramas as faceless victims. Thunder Road visits Newport, Newbury, Reading, Brecon and Exeter.

Sophie Duker will present her show Venus at Soho Theatre from 29 October until 2 November. In her full-fat woke debut hour Duker takes her audience on an unconventional journey of self-discovery.

I didn’t manage to see this in Edinburgh but it got rave reviews elsewhere. Laura Murphy’s Contra is at Jacksons Lane in Highgate on 19 November. We are told to expect scenes of nudity, aerial acrobatics, and explicit references to mythical reptiles and women’s sexuality.

The feature image is from Dear Marie Stopes and is by Claire Shovelton. It shows two women with old fashioned hairstyles and wearing tea dresses walking down some wide red-carpeted steps. They both carry a pile of cardboard boxes and have slightly worries or intrigued expressions on their faces. A man playing a cello can just be seen to the left of the photograph.

Image two is from I’d Rather Go Blind at Omnibus Theatre. Is shows a young child sitting at a table eating a piece of cake with a spoon. They have a blue party hat on their head and their hair is in bunches