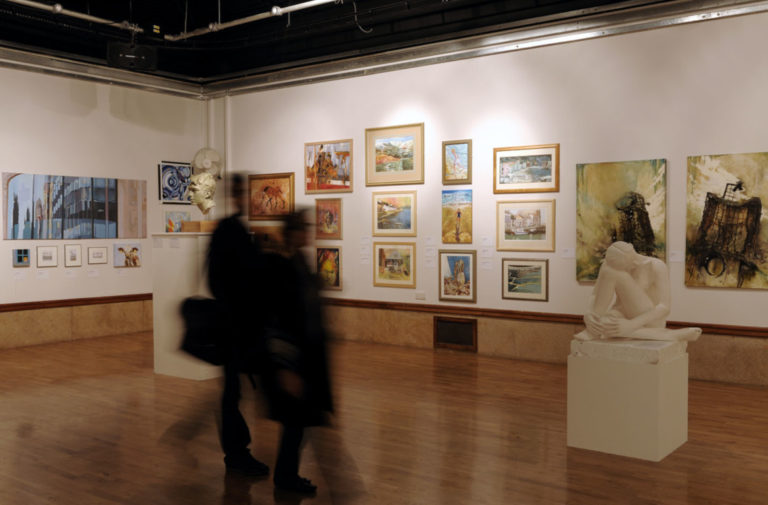 Museums and galleries: October and November 2019

Welcome to the latest round-up covering UK museums and galleries for October and November! It’s a bumper edition this month, but I’ve grouped things regionally so you can jump straight to the section that’s best for you. Do get in touch if you’ve seen one of these and have a review. I’ve now been doing these round-ups for about six months; they take quite a while to pull together, so it would be really great to hear whether or not they’re useful and if you’d like me to keep going with them.

Holding Ground explores landscape, place and experience near Aberdeen until 6 November, where you can also see Sounding Boards and Landing Boards at the Royal Infirmary. In Dundee A Woman’s Perspective opens on 9 November, and there’s a talk on the female body as political image to tie in with the multimedia exhibition of Jasmina Cibic. It’s the final week of the exhibition on Flora Macdonald in Perth.

TIME after [ ( ) ] after TIME in Glasgow “seeks to evoke the creative spirit of shared experience” at Wasps Studios, where it’s also the final few weeks of Claire Curtain’s love letter to Argyll and Bute; the display of Jenny Matthews’ floral paintings and Better Rainfall, a collaborative installation exploring loneliness, also finish soon. Tie-in events for the ongoing Linda McCartney retrospective include a curator’s talk (26 October), a tour considering the impact of early photographer Anna Atkins (29 October), and another curator’s talk on McCartney’s use of technology (16 November).

New exhibitions in November include: It’s the final week of The Long Look (pictured above right) at the National Portrait Gallery in Edinburgh; the exhibition of Tina Holley’s watercolours is also finishing soon at Royal Botanic Gardens.

It’s a busy time for new exhibitions. Transparency responds to the architectural heritage of Castle Mills. Katie Paterson’s exploration of time and space opens this week, with the artist in conversation on 26 October. Life in Paint explores the work of Victorian pioneer Mary Cameron from November. At Open Eye Gallery, exhibitions are opening on Jacqueline Leighton Boyce’s “narrative ceramics” and Disa Allsopps’s jewellery. Later in the month, an exhibition is opening on May Morris, often known as the daughter of William Morris, with a curator’s talk on 26 November. The end of the month also sees the opening of Paula Rego’s striking exhibition Obedience and Defiance, with a curator’s talk on 23 November.

On the Isle of Bute, it’s the final few days of the exhibition on Mary Queen of Scots. At Old Gala House in Galashiels the displays of Cate Ryan (mixed media), Montse Herrera (mixed media) and Bonnie Fairbrass (clay) are finishing at the end of October. There’s a chance to meet Ann Smith, artist behind The Wonders of Wool, on 8 and 9 November in Hawick. There’s a chance to meet artist in residence Verity Pulford at the Craft Centre in Ruthin on 26 October. At Mostyn in Llandudno, the ceramic installation of Elisabetta Benassi is finishing soon, replaced by the exhibitions of Chiara Camoni (who “creates spaces imbued with poetic sensibility”), Anj Smith (“reflecting on the very possibilities and limitations” of painting) and Nobuko Tsuchiya (creating “amorphous, hybrid minimalist mechanical objects”).

The work of sculptor and jeweller Ann Catrin Evans is now on display in Conwy. The exhibition on prolific diarist Elizabeth Morgan is finishing soon in Bangor.

At MOMA Machynlleth, you can see the work of paper artist Antonia Spowers and the colourful sketches of Ruth Koffer and Anne Ferris created for Birmingham Buddhist Centre. The lively illustrations of A.K. Skipsey are now on display in Elan Valley. The exhibition of Miranda Rhys’ colourful paintings continues at Dinefwr Castle until mid-November.

In Swansea, the exhibition of Frances Richards’ paintings (pictured right) has been extended until late November. Sophy Rickett’s multimedia photography is also now on display. The work of Bernd and Hilla Becher is on display as part of the photography season at the Museum of Wales, Cardiff, with a panel discussion (25 October) and a curator’s tour (29 November).

I struggled to find much for this month; let me know if there’s somewhere obvious I’m missing. On 26 October, multimedia film-maker Mairéad McClean is in conversation at Ulster American Folk Park, and there’s the regular (and final listed) LGBTQ+ tour at Hillsborough Castle.

In Newcastle, The Enchanted Interior explores the sinister ‘gilded cage’ of nineteenth-century painting, with a curator’s talk on 19 November. At BALTIC, Pippa Hale’s interactive exhibition and Joy Labinjo’s intimate portraits are now on display, to be joined by pioneering feminist photographer Judy Chicago in November (with a tie-in event on 20 November). Things from Home finishes soon in Durham, an exhibition of ceramics by Katrin Moye exploring the experiences of international students.

In York, pioneering artist Alison Britton is in conversation on 23 November. In Leeds, the exhibition of Lesley Birch’s prints finishes at the end of October, replaced by Sarah Jenkins’ ceramics. The exhibition of Janet Rawlins’ textural landscapes also finishes in November. War Without Glamour opens on 4 November, exploring the life of Emily Hobhouse, with a talk on 6 November. Other events include:

The exhibition on female fisherwomen finishes this week in Hull. A display on Anne Frank opens in November in Bolton. In Manchester, Still I Rise closes in early November, celebrating BAME communities in Salford. Ceramicist Halima Cassell is giving a talk on 9 November to accompany her ongoing exhibition, pictured left; the Singh Twins are also in conversation on 31 October. There are a few new exhibitions:

In:Visible Women is running all this week at Tate Liverpool. Jacqui Hallum’s paintings are now on display at The Walker. An English Lady’s Wardrobe showcases clothing and accessories purchased by Emily Tinne from 25 October, with tours from 29 October. There’s a week of events to celebrate and support women in the arts in mid-November. The collaboration by Elizabeth Kwant with survivors of modern-day slavery opens on 15 November. Other one-off events include:

Melanie Tomlinson’s intricate automata are on display in Nottingham. Elvira Dyangani Ose is in conversation on 14 November, discussing her work on the histories and legacies of colonialism in contemporary African art. 100 First Women Portraits finishes soon in Leicester.

Artists consider “queerness and faith” at Birmingham Museum on 11 November. Z. Nia Reynolds is in conversation at the Black Country Living Museum on 24 October. As well as the regular Mothers Who Make session in Coventry, an exhibition on George Eliot opens in November. At the Milton Keynes Gallery there’s a two-day conference in November reflecting on their work to put “neurodiverse artists and makers at the centre”. I Am A Wanderer is now open at Modern Art Oxford, with a film screening on 7 November and a talk on 28 November.

You can learn about “wise women to wicked witches” in Great Yarmouth on 23 October. The Cambridge Show continues, with a panel discussion on 24 October and artist Rosanna Greaves in conversation on 26 October. The exhibition on the female Pre-Raphaelites is now open, with a talk on 1 November. Ehryn Torrell is in conversation on 23 October to mark the end of the exhibition on Finnish artist Helene Schjerfbeck, pictured right. The display of Beatrix Potter’s early art finishes soon at the V&A.

In contemporary art, Kara Walker’s installation at the Tate Modern is now open, with a tour on 1 November. There’s a series of events next week on Sadie Clayton’s collaboration with an AI robot. Jenna Sutela’s exhibition “working with words, sounds and other living materials” is now open, while the major retrospective on Bridget Riley begins next week, with a talk on 27 November.

Mary Sibande’s photography is now on display, as is the portraiture of Elizabeth Peyton (with a curator’s talk on 25 October). The exhibition of Dora Maar’s provocative photomontages opens in late November. An international conference at the end of November considers the role of women photographers.

Events in October include: A selection of Yoko Ono’s films are on display in Bristol. Changing Perspectives features Chao Tayiana’s photography of Nairobi, responding to Charles Trotter’s from the 50s; there’s also a talk on 7 November on the whitewashing of Black women in art. On 23 October mosaicist Candace Bahouth is leading to a tour of her work, and there’s a a talk on founder of the Tudor dynasty Margaret Beaufort on 19 November. As well as a workshop on 24 October with charcoal artist Kate Lynch, Reedbeds and Waterways opens in mid-November at the Somerset Rural Life museum, with the artist in conversation on 16 November.

In Brighton, Lindsay Seers is in conversation on 2 November to discuss her immersive reality installation. Electric Eclectic considers the tension between realism and fantasy, followed by Lily Rigby’s exploration of the power of water. The display of Vija Celmins’ monochrome landscapes on the Isle of Wight finishes in mid-November; there’s also a conference on Victoria and Albert at Osborne on 6 November.

The founder of the Museum of Colour is in conversation on 6 November in Exeter. Artist Otobong Nkanga leads a performance lecture in connection with her exhibition at Tate St Ives on 5 November.

If any of the artists or institutions above hold views in contrast to The F-Word’s position on inclusivity and access, please let me know.