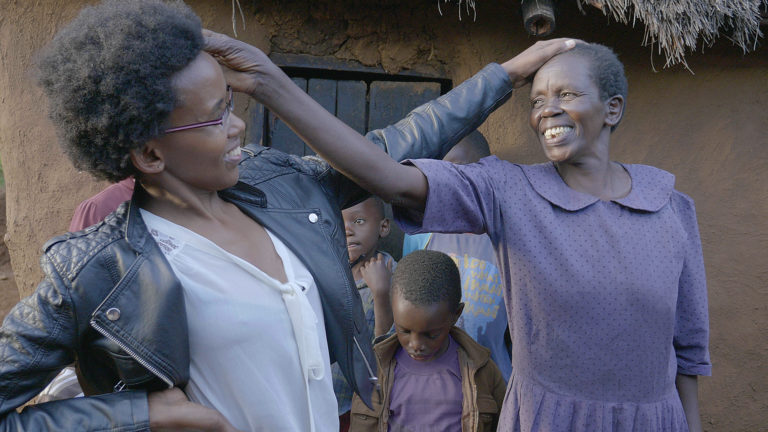 The year 2019 seems to be one of renewed vigour and energy in the UK when it comes to resisting authoritarian control over women’s bodies. In May the outbursts of collective outrage addressed restrictive abortion laws in Alabama, triggering renewed anger in the UK over the similar situation in Northern Ireland and Jeremy Hunt’s desire to halve the legal time limit for abortions from 24 to 12 weeks. On 7 June, kick-off of the FIFA Women’s World Cup reminded us of the UK Football Association’s 1921 decision to ban women’s football at its grounds and strip all-female clubs of official recognition for fifty years. As the UK appeared to be raging at new and old manifestations of the suppression of women’s autonomy, the country’s biggest international documentary film festival started in Sheffield. Three stellar documentaries by filmmakers from China, Sudan and Kenya that premiered at Sheffield Doc/Fest uncover just how global the challenge of lifting state control over women’s bodies truly is. These three films—In Search… by Beryl Magoko, One-Child Nation by Nanfu Wang and Jialing Zhang and Khartoum Offside by Marwa Zein—offer a broad survey of the many different ways women’s bodies can be restricted, from the devastating procedures of female genital mutilation, forced sterilisation and abortion to the less physically intrusive but also oppressive state ban on the creation of a national women’s football team, deemed by a religious order in Sudan an “immoral act”.

Below I give an overview of what these insightful documentaries have to offer, hoping at least some of them will be shown again in the UK so you can gain insights on turning the global tide on the historical oppression of women’s bodies.

In Search… is Kenyan-German director Beryl Magoko’s second documentary on female genital mutilation (FGM), following her first film The Cut (2012). The earlier film included interviews of women and girls talking about their experiences of FGM as well as men “giving their opinion of FGM” (some of whom, the director told me during our interview, would say: “I’d never marry a woman who is not cut” while others say “I’d never marry a woman who is cut.”) In Search…, on the other hand, is a “special project…an autobiography…it’s my own story.” Magoko says she did not have the courage to tell her story at the time of making The Cut so her own circumcision was not mentioned in it.

In Search… was motivated by Magoko’s desire to listen to other survivors of FGM and to confront her own story with theirs. In her words, “it would be hard for me if I haven’t dealt with my own trauma to listen to other people tell me about their own traumatic experiences.” Indeed, in the documentary we see the filmmaker interviewing many women not only about their experiences of undergoing FGM but also about Magoko’s new avenue of enquiry – reconstructive surgery. The first woman we see interviewed appears behind a silk screen – she wants to be anonymous “because of [her] family”; “going through the [reconstruction] operation doesn’t mean you are willing to speak about it,” points out Magoko. We hear other women talking about the procedure and also doctors discussing its traumatic physical and emotional aftermath, with one of them saying: “It affects lower abdomen, the whole system…Every human being exposed to that danger will try to run away.”

The documentary is comprised of multiple thematic strands, with loss of a sense of self post-FGM being one of them, which Magoko candidly explores through her discussions with other FGM survivors. However, her relationship with her mother is one of the film’s most striking themes. Magoko begins the documentary having not ever talked to her mother about her circumcision, and having never understood why and how her own circumcision happened and why her mother never stopped it. By the end, this line of enquiry has been explored with quite tender and lovely outcomes which are also not devoid of complexity. While Magoko’s mother was a feminist who believed that FGM “is not good for the girls, it serves no purpose”, and she did not take her daughter to undergo FGM, she believed that Beryl’s circumcision was inevitable, and she would have gone through it no matter what efforts she put up to stop it.

Magoko’s camerawoman Jule Katinker Cramer told me at interview that In Search… took many years to make, involving many “near giving up” points, but with the help of Jule’s cinematographic sixth sense and knowledge of the director, they managed to capture many of Magoko’s more vulnerable and intimate moments, and translate them into some of the film’s most touching events.

In Search… is a touching inquiry into past loss and how we regain ourselves, about the relief of lifting taboos and questioning the rationality of our own realities (even when it seems dangerous to do this), and about the complexity of family life and relationships between women living under a patriarchy. Filmmaker and first-time mother Nanfu Wang’s One Child Nation (co-directed with Jialing Zhang) is a chilling account of the forced sterilisations, child abandonment, and state-sponsored kidnappings that were rife throughout the enforcement of China’s one-child policy (1970–2015). Wang’s candid interviews with the policy’s enforcement agents offer the viewer a stark insight into the mechanics of state oppression. We meet a midwife who professes to have carried out around 80,000 abortions and sterilisations over her decades-long career (sterilisation is a “quick” procedure, with tens being done per day, we learn). Now that the one-child policy has been lifted, the midwife has become a repentant infertility specialist, who prides herself on the pictures of babies sent to her by the couples she has helped give birth. But this midwife appears to be one of the only subjects of the documentary who at least seems to shoulder some sort of personal, moral responsibility for playing part in enforcing the policy.

Perhaps what is best – and most striking – about Wang’s documentary is how she meticulously unravels the complex mechanisms required for society to justify (or to simply not question) the overwhelming emotional pain of having a baby taken away, being forcibly sterilised, or unwittingly coming across dumped baby corpses in the street. In addition to featuring clips of the lively propaganda videos that vociferously promoted the one-child policy (deploying the catchy use of costume, dance, and melodramatic singing), Wang asks everyone she interviews about whether the policy was worth the sacrifices each family made. The common refrain, from victims and enforcers of the policy alike, is that they had “no choice” in the matter. In the post-screening Skype Q&A Wang herself admitted that it surprised her that even victims did not resent the policy and that they did not make the connection that the government made the policy happen. This made her think how powerful the propaganda was. Wang says: “throughout my life, I was taught to believe the love of my country was equal to my love of the government and the family. I was so angry even with my own family that there wasn’t more to be said or done.” One Child Nation is Wang’s attempt to reckon with this – and to ensure that more is said and done about China’s one-child policy which has now converted into a slightly less restrictive two-child policy.

One Child Nation documents the measures the state had to take in order to silence the pain of a population. Unlike In Search…’s optimistic intimacy (if on a devastating theme), One-Child Nation offers a brutal portrait of the violence behind a regime that seeks to suppress women’s reproductive capacities and normalise the forcible breaking up of families. In 2012, the Islamic Fiqh Council in Sudan issued a fatwa (religious order) saying that it is forbidden to create a women’s soccer team in the country, deeming it an immoral act. This was in response to a question by FIFA about the feasibility of creating a team. To explain this background, Khartoum Offside opens with a card saying: “In Sudan, under Islamic military rule, women are not allowed to play football, or make films, but…” Delightfully, the next 80 minutes of film seem to be a testament to the counter-narrative that the lives of our female protagonists fulfil. They are a buoyant and determined group of individuals whose goal is to play football professionally.

Through vibrant camera shots, including those of the entrepreneurial Sara, an avid Barcelona fan fighting for national recognition of a women’s football team, filmmaker Marwa Zein captures the bustle of the lives of her protagonists and their gumption when it comes to achieving their goals. As Sara jokes about executing a header with a headscarf on, the audience sees that these women enjoy a freedom in each other’s company that we might not expect on hearing about the country’s ‘official’ rules for women.

The documentary follows the women through several years of their struggle. Even though Sudan’s National Football Federation (NFF) gets FIFA funds earmarked for the women’s teams, the team we watch continues to be marginalised. The turning point within the documentary comes when NFF elections come by, meaning there could be real change within the system. Through their moments of hope and struggle, the protagonists never fail to do what they love – play football. Khartoum Offside is a documentary about the resilience of women in the face of oppression, about how official narratives are never the whole picture and whatever behaviour the government tries to stamp out, it cannot keep down these ladies’ irrepressible spirits. As Marwa Zein told me via email:

This film is my tribute to the power of the Sudanese Women and how our people have very little but they don’t give up their fight. No victimising, not selling our sadness instead we face oppression with humour. We laugh it out! Our reality is difficult but I do films to inspire people and charge them to continue.

Whichever of these documentaries you manage to watch (hopefully it’s all of them – keep your eyes peeled!), I hope they fill in part of your jigsaw puzzle of the global picture of women’s oppression, and galvanise you – like Nanfu Wang, Jialing Zhang, Beryl Magoko and Marwa Zein – to take notice and take a stand. I felt that each film advocated for changes in official policy to ensure greater respect for women’s autonomy and equality. What really struck me was the strength of the intimacy each of them portrayed, signalling how, perhaps, women sharing their experiences and talking to each other might be another route to liberation.

All films were showing at this year’s Sheffield Doc/Fest, 6-13 June. The festival is returning in 2020.
British distributor Dogwoof bought rights to Nanfu Wang and Jialing Zhang’s One Child Nation, watch this space.

All images courtesy of Sheffield Doc/Fest.

Images descriptions:
1. Two black women with short hair, one younger and one older, are playfully touching each other’s heads. There are four young black children standing behind them. It’s a still from Beryl Magoko’s In search…
2. A Chinese woman, holding an umbrella above her head, is standing with a baby in a carrier on the front of her body next to a mural depicting a Chinese woman and a child and reading ‘ONE CHILD IS BEST’ in English and also probably in one of Chinese languages. It’s a still from Nanfu Wang and Jialing Zhang’s One Child Nation.
3. A young black woman wearing red bandana on her head is sitting on a football pitch, smiling and probably adjusting her shoes, while two other black women are in the background, out of focus, pumping a football. It’s a still from Marwa Zein’s Khartoum Offside.