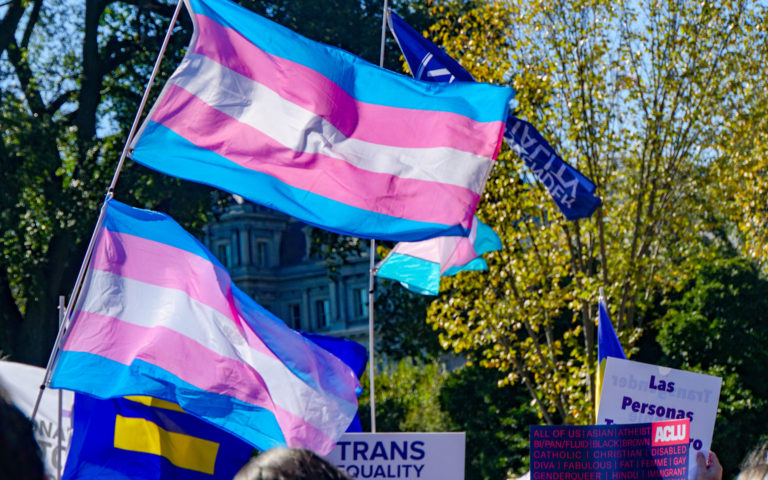 President Trump has once again taken aim at transgender rights - join the National Center for Transgender Equality and partner organizations in front of the White House to tell the administration that we #WontBeErased. We will meet at the corner of Pennsylvania Ave. and Jackson Pl., near the Rochambeau statue.

Over a year ago the government began consulting on reforms to the 2004 Gender Recognition Act. This legislation creates a lengthy process for people seeking to change their gender, including obtaining a formal diagnosis of gender dysphoria. Reviewed by a board of people they will never meet, their identity is decided for them. An updated Act would look at allowing individuals to ‘self-identify’, making the process of changing gender easier and allowing recognition of those who identify as non-binary.

Reform of the Gender Recognition Act now lies in the hands of Liz Truss, the new Minister for Women and Equalities. Truss’ previous record in cabinet and as an MP does little to inspire confidence. As Justice Secretary, Truss was late to protect judges after they were branded “enemies of the people” in a vicious attack by the Daily Mail over their ruling on a Brexit-related case, back in 2016. In another incident, the Lord Chief Justice condemned Truss over her complete misunderstanding of reform to cross-examinations of victims in rape trials. Her mistake meant the Lord Chief Justice had to write to all judges to clarify the reforms. This list of embarrassments as Justice Minister does not seem to have halted her progress in being appointed as Equalities Minister. In this seemingly short process of selection for the role, it was as if none of Johnson’s aides checked Twitter – or cared about what they found. In April 2018 Truss retweeted an article from The Spectator discussing Mumsnet, a site notorious for anti-trans rhetoric. Truss praised their promotion of ‘free speech’ regarding transgender rights.  The right to ‘free speech’ is an invaluable one, which many individuals around the world do not get to enjoy. It must be noted, however, that hate speech is often protected under the banner of free speech. For Truss to retweet an article from Mumsnet, a site where hate speech has been present and widely shared, disregards the importance of separating hate and free speech. For Truss to disregard Mumsnet’s history of hate speech is a naive and privileged action, which further demonstrates her ignorance of protecting the rights of marginalised and highly targeted groups.

In the past year the Office for National Statistics reported a 37% rise in hate crimes towards transgender individuals in England and Wales. Leaving Truss in charge of the review of the Gender Recognition Act undermines the rights and safety of transgender and non-binary citizens. Truss fails to understand the repercussions of promoting a site like Mumsnet that refuses to condemn anti-trans rhetoric. To place the protection of some of the country’s most vulnerable citizens in her hands is an insult to the LBGTQ+ community.

The discussion of the Gender Recognition Act was resurfaced by The Daily Mail who claimed a senior government source said “the plans would be kicked into the long grass” until after the next election “and probably much later than that”. More speculation arose, with Pink News reporting that while the review had been delayed, a government spokesperson said that “the secretary of state is committed to following through with the consultation in due course”. Truss has so far made no announcement regarding the review of the Gender Recognition Act, which was due to be published before Theresa May stood down as Prime Minister in July 2019. How much longer will transgender rights be left on the shelf?

Truss has a voting record on a par with some of the least progressive individuals to grace our parliament. Truss has consistently voted against raising welfare benefits at least in line with prices, voted for ending financial support for some 16 to 19 year olds in training and further education. Her voting record on climate change is dismal at best. It is abhorrent that an individual with a voting record like this is allowed to take such monumental decisions on the rights of other human beings. How much longer do transgender individuals have to live in fear, in a society governed by those with no regard for their right to freedom and respect?

It is an appalling breach of LGBTQ+ rights that the Gender Recognition Act reforms are seemingly being continuously shelved and delayed. Truss’ lack of qualification for her role as Justice Minister do not make good precedence for her role as Equalities Minister. It is difficult to comprehend the complete lack of awareness Truss has of the importance of reforming the Gender Recognition Act and the effect it would have on transgender and non-binary individuals. I can only finish with the conclusion that I wish I was as qualified as Liz Truss to decide the importance of others’ rights, but then I realise, I am.

The feature image shows two trans rights flags blowing in the wind. The colours on the flags’ horizontal stripes (from top to bottom) are light blue, dark pink, white, the same dark pink and the same light blue. In the background people are holding up different plaques. One reads ‘trans equality’ and another is written in Spanish. A blue flag and a blue and yellow flag can also be seen behind the trans rights flag. Large green trees and part of a building can also be seen behind the flags and plaques.
Photograph by Ted Eytan

The image shows Liz Truss, walking towards the camera, but looking off to her left. She wears a grey jacket over a white top. Behind her there is a woman in a high-visibility jacket leaning on the front of a white van, talking to two men, one of whom wears navy blue and the other wears teal. The man wearing teal is sitting inside the van and leans out of the window. Behind them another man wearing navy looks on, but is largely blurry.
Photograph by mrgarethm