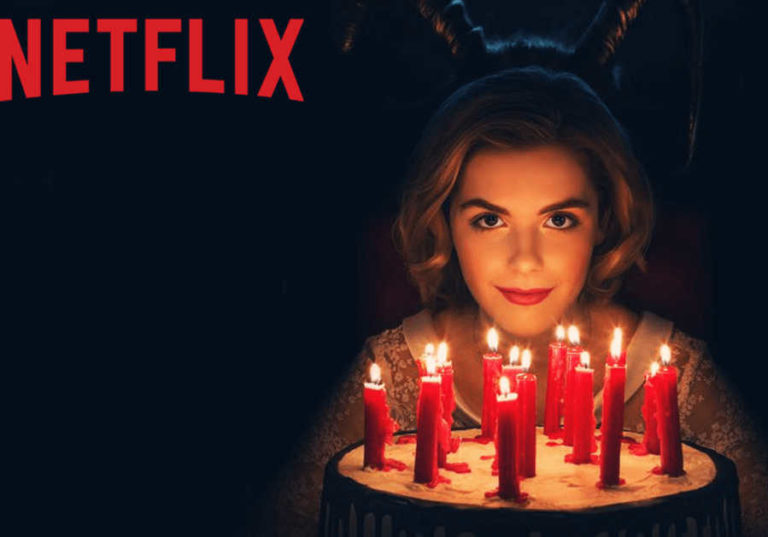 Born to kill children and men: the resurrection of Lilith

Chilling Adventures of Sabrina has put a lot of Netflix users under a spell. Its dark take on the original series, with underlying feminist and LGBTQ+ inclusive storylines, makes it the perfect series to cosy up with during these gloomier days.

The show may centre around Sabrina, but there’s one character who’s made the show her own. Miss Wardwell – otherwise known as Lilith. Unbeknown to some, the character of Lilith is steeped in Jewish folklore as an ancient demon who was the first wife of Adam. Scripture claims that, after refusing to be subservient and lie beneath Adam, Lilith flew out of the Garden of Eden. God sent three angels after her, but she refused to come back. God claimed he would kill 100 of her children a day if she did not return, to which she responded: “I was born to kill children and men.”

Feminist activist Aviva Cantor Zuckoff wrote that “Lilith is a negative, shadow role, the flip side of Eve. Eve is the enabler, Lilith, the disabler; Eve, the ‘mother of all life’, Lilith, a destroyer of life. In creating the Lilith shadow role, men are telling a woman that if she is independent, assertive, free, as Lilith was, she’ll end up a frigid nymphomaniac childless witch.”

Lilith simply didn’t want to be bossed around by Adam, who she saw as her equal, and because she had the courage to walk away, she was slandered in her absence. Some of these ideas still resonate today, for instance: challenging gender stereotypes, bodily integrity and individualism

In 1976, Jewish feminist magazine Lilith was founded, and Zuckoff explained in the first issue why the magazine was named after the ancient demon: “Lilith is a powerful female … By acknowledging Lilith’s revolt and even in telling of her vengeful activities, myth-makers also acknowledge Lilith’s power.”

Lilith has become a modern-day feminist icon for three main reasons: she’s independent, she fights the patriarchy and she owns her sexuality. In 1972, Judith Plaskow, a theologian, helped this interpretation reach the cultural elevation it has today by writing a parable titled The Coming of Lilith. Rather than Plaskow portraying Lilith as a child-snatching, man-eating entity, she sought to tell Lilith’s side of the story: “Lilith simply didn’t want to be bossed around by Adam, who she saw as her equal, and because she had the courage to walk away, she was slandered in her absence.” The release of the story, in the midst of the era of second wave feminism, certainly helped to change attitudes towards the figure of Lilith. Some of the ideas Plaskow draws upon in her parable still resonate today, for instance: challenging gender stereotypes, bodily integrity and individualism.

The idea of Lilith as a feminist symbol has inspired many Jewish feminists and pagans to create their own stories about Lilith in the form of articles, songs and poetry. The book Whose Lilith?, released in 1998, features many of these art works.

This embracing of Lilith by feminist movements is clearly something the creators of Chilling Adventures of Sabrina have caught on to as they explore the myriad of elements which form Lilith’s representation and personality.

In the show, Lilith is portrayed as a demon who does the Devil’s bidding. When Satan decides it’s time to start preparing Sabrina to join him in hell as his second in command, he sends his partner, Lilith, to keep an eye on her. Lilith’s character starts as an evil, demonic woman who will do anything for the dark lord. But as the show goes on we see a different side to Lilith’s vengeful nature and independence.

In the first season of Sabrina, Lilith is introduced when she kills Sabrina’s favourite high school teacher, Miss Wardell, in order to steal her identity. She does this in an attempt to become closer to Sabrina to ensure she signs her name in the Devil’s book – an act which would result in Sabrina’s soul and body belonging to Lucifer himself. She tells Sabrina she is merely a witch and Sabrina lets the woman she thinks is Miss Wardwell know she is going to outsmart the Devil, making the job that Devil has entrusted Lilith with a whole lot harder. Expecting Sabrina to ditch her mortal friends for the power of magic isn’t as easy as Lilith first thought. Frustrated, she resorts to her most evil scheme yet to get Sabrina to sign her name in the book. Lilith summons thirteen witches who were hung and are now hell-bent on destroying Greendale, the town where Sabrina lives. Lilith sacrifices a virgin male student in the place they were executed to resurrect them. The student in question had been picking on Sabrina’s non-binary friend, Theo. Lilith’s blasé attitude towards killing the boy shows her contempt for men and perhaps even a latent desire to seek justice for women and non-binary people.

During the second series, Lilith begins to hatch her own plans, emphasising her independent personality and power without the control of Lucifer. One example of this is when she helps Sabrina’s friend, Theo, make it on to the basketball team after the coach rejects him. Lilith’s involvement isn’t explicitly to help Theo, but demonstrates that she is simply fed up of men disregarding women and non-binary people as weaker and not capable. Later in the series, Lilith discovers the Dark Lord’s plans for Sabrina – that he will be pushing Lilith out of the picture so that Sabrina can rule hell by his side. Lilith doesn’t take kindly to his betrayal and decides to interrupt his plans.

After Sabrina discovers Lilith’s plans to kill her, Lilith must admit her true identity to the Spellmans and how she has served the Devil for all these years. The Devil’s promise to make Lilith Queen of Hell is what kept her devoted. Lilith claims she will help take down Lucifer. Sabrina questions Lilith’s true intentions and, for the first time, we see Lilith as her true self.

The Devil’s change of plans has cost him her patience, and now she wants to take hell for herself, not just as the Devil’s handmaid.

With the help of Sabrina and her family, Lilith heads back to hell as queen, leaving Sabrina with three gifts: her freedom, her powers and the resurrection of her favourite teacher, Miss Wardwell. The end of season two resonates with Judith Plaskow’s interpretation of Lilith. Sabrina doesn’t want to be bossed around by the Devil, the same way Lilith didn’t want to be bossed around by Adam. Lilith allows Sabrina to be free and independent, as Lilith should have been allowed be.

By no means does the show portray Lilith as ‘nice’. Her complex character is supposed to make viewers think about how Lilith has been misunderstood for centuries and why this has made her who she is. During the first season Lilith is nothing but a pawn in the Devil’s game with a cruel demeanour to match, similar to ancient tales classing her as a demon. The second series gives room for Lilith to act off her own accord. After Satan’s betrayal, Lilith creates her own narrative: being left out of the deal that kept her by Satan’s side pushes her to focus on her own destiny.

Chilling Adventures of Sabrina challenges the long misogynistic tradition which has seen women labelled ‘good’ or ‘bad’ based on how submissive they are. Lilith’s development in the show explores the complex way women view themselves when objectified and robbed of the right to be treated as multifaceted beings, as well as what happens when they fight back.

Images courtesy of Netflix Media Centre.
Image description:
1. Sabrina sits with a birthday cake in front of her. Sabrina’s face is against a black background, lit up only by the red candles on the cake. The candles’ wax resembles blood. Sabrina has devil-like horns on her head and a smirk on her face.
2. Lilith leans against the fence of a basketball field. She wears an extravagant attire, including a neon pink dress and large sunglasses that almost cover her face. She looks annoyed.
3. Sabrina and Lilith are in a classroom. Both of them are staring at something, not revealed in the picture. Sabrina wears a red coat and Lilith wears a brown and blue shirt.