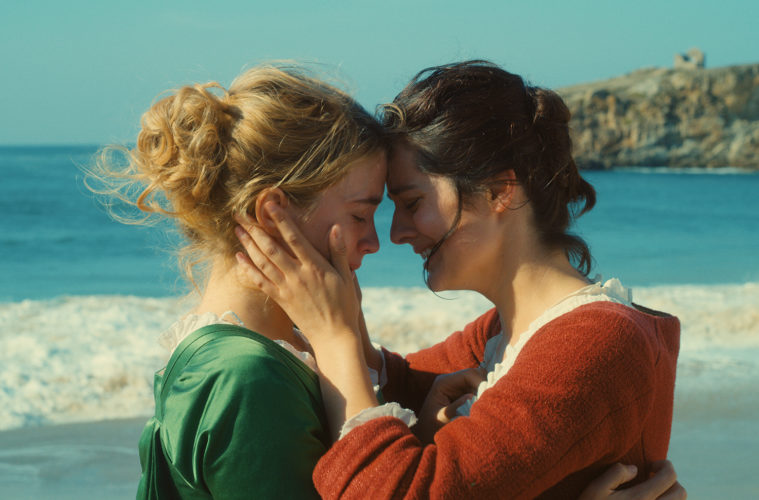 Portrait of a Lady on Fire is one of the most talked-about films of the last few months.

With international release dates that are months apart from each other, chunks of the world are, one by one, experiencing Céline Sciamma’s latest release.

At Cannes, the writer-director became the first woman to win the Queer Palm Award and also scored the prize for Best Screenplay.

After attending a preview screening, despite the high expectations, I too jumped on the bandwagon.

We often hear the expression ‘female gaze’ to define how having women involved in the filmmaking process changes the way certain elements of the film are represented. First and foremost, the sexualisation of women’s bodies and the agency of women characters, who, in most male-led films, are depicted so they can be appreciated by male audiences.

Portrait of a Lady on Fire is a staggeringly clear example of what female gaze means. Céline Sciamma and cinematographer Claire Mathon create a meta-commentary on the idea of female gaze itself.

Set in the 1700s on a remote island of Brittany, it’s a love story between Heloise (Adele Haenel), a feisty noblewoman, and Marianne (Noemie Merlant), a young painter who is hired as a fake companion to Marianne but who is secretly entrusted with painting her portrait to send it to aspiring husbands.

Heloise doesn’t want to get married and refuses to sit for a portrait, hence the need to trick her. The relationship between the two women develops through lingering gazes and long conversations. The isolation of the island and its staggeringly beautiful cliffs contribute to creating a mythological atmosphere. Each frame is carefully studied, bringing to mind a painting composition. We are being led into a world that we can’t quite place but that is wild and seductive.

In a brilliant scene of Heloise reading the myth of Orpheus and Eurydice, we are asked to question why we always assume it was Orpheus’ decision to turn around to look at his wife and therefore condemn her to damnation.

“What if it was Eurydice who asked him to turn?” Heloise asks. “What if the memory of that instant was better than the risk of losing Orpheus again?”

While my heart breaks every time yet another queer story is deprived of a happy ending, I must admit that the plot of Portrait of a Lady on Fire rests on the impossibility of such romantic finale.

We know Heloise is going to get married and we know Marianne will develop as a painter.

The women’s choice to still get involved with each other, despite the fixed deadline on their time together, is an affirmation of their agency, a conscious understanding that choosing who to love, however briefly, is still better than denying oneself that temporary moment

We’re never tricked into believing it’s going to end any other way. In fact, the opening scene is set years later. Marianne teaches young girls how to paint and one of the students spots a painting of Heloise and enquires about it. This immediately triggers a sequence of recollections, focusing on what is enclosed within the frame of that particular painting.

The women’s choice to still get involved with each other, despite the fixed deadline on their time together, is an affirmation of their agency, a conscious understanding that choosing who to love, however briefly, is still better than denying oneself that temporary moment. It’s the knowledge that at least once in their lives these women have been seen for exactly who they are and exactly on their terms.

Also, brace yourself: there is no sex scene. This was my favourite twist. Sciamma, a queer woman herself, builds up the foreplay between the women and then cuts from their intense kiss to the morning after, with the two of them playing around in bed, thick coarse body hair included. It’s a brilliant response to the long tradition of lesbian sex scenes being portrayed unrealistically or emphasised in a way that straight sex scenes never would be, not even in the most intense romance movies. Think of Blue is the Warmest Colour, Carol, Disobedience… You just can’t escape it. And yes, all these films are directed by men. As a bisexual woman viewer, I often can’t tell immediately how much effort or genuine goodwill was put into crafting a scene, but I do know that I have never seen a straight sex scene take so much screen time outside of porn.

By eluding this trope, Sciamma proves there are so many different and often subtler ways of conveying desire, sensuality and eroticism.

Marianne’s profession also allows the viewer to look further into the notion of female gaze and women working in artistic fields. Through Marianne, we learn women painters were not allowed to access male models, which therefore restricted the kind of subjects and scenes they could represent.

Heloise challenges the notion of what “important art” means by inviting Marianne to paint her as she helps her maid Sophie (Luana Bajrami) to have an abortion. Sophie is firm in her decision. Once again her choice is valued and never questioned. It’s even framed on a canvas. Why are there so very few paintings depicting abortion in the history of art? Could it be because women were never allowed to decide what subjects are important enough to immortalise?

It’s not a coincidence that Céline Sciamma was part of the 82 women who protested at Cannes in 2018 against inequality in the industry. The group represented the number of female directors ever nominated in the history of the festival – a staggering difference compared to the 1688 male directors chosen by the committee across the years.

With Portrait of a Lady on Fire, Sciamma shows the enormous untapped potential of storytelling that comes from having women (along with other underrepresented groups) working in more technical and decision-making roles. The film’s crew sees women at the helm in directing, production (including first and second assistant directors), cinematography, electrical department, sound, costume design, make up and casting.

This is the other side of the coin. This is what we mean by ‘female gaze’. And I dare you to say it’s not spectacular.

Portrait of a Lady on Fire is out in UK cinemas on February 28th. Special preview screenings are available starting February 14th.

Images courtesy of mk2 films.
Image description:
1. Heloise and Marianna are hugging on a beach, foreheads touching. They are crying. They wear period clothing: a green dress for Heloise and a red one for Marianne. Waves are visible in the background.
2. This shot from the film is reminiscent of a landscape painting. It depicts a long stretch of beach with blue waves crashing. In the middle of the frame Heloise stands in a green dress, looking at the horizon. Her back is turned to the camera.
3. Heloise and Marianne are in a dimly lit room. Heloise hugs Marianne from behind and caresses her face. They look intimate and attracted to each other.