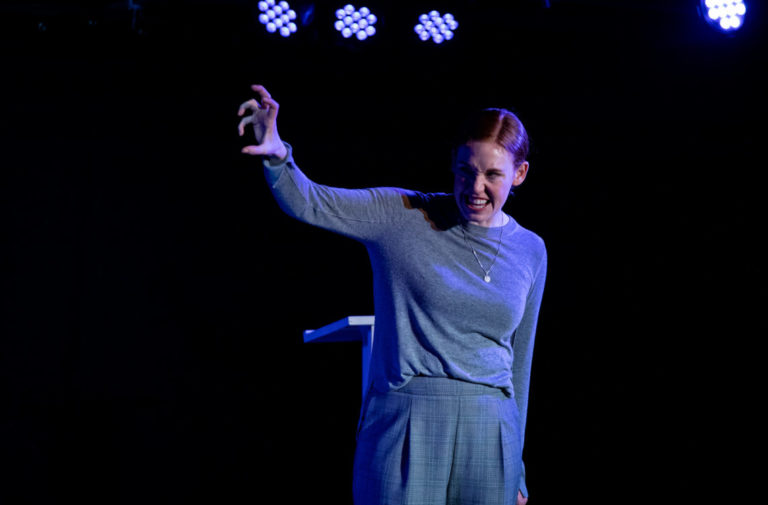 Fronted by Australian actor Gabrielle Scawthorn, this one-woman play is comprised of three self-contained monologues, each of which centres on a high-profile woman who is forced to apologise in one form or another. With tightly-bound writing and a flawless performance from Scawthorn, this piece of drama skilfully examines the nuanced performativity involved in the act of apologising. It blurs the lines between the public and the private, the disingenuous and the sincere, and in turn produces an engrossing critique of responsibility, ethics and power.

The upstairs, black-box space of the Omnibus Theatre in London is kept as minimal as possible for this show. Only a handful of props are used throughout: a podium, a chair, some red boots, a table, water jug and glasses. Scawthorn confidently commands the small space. Under Jane Moriarty’s direction, Scawthorn presents us with worlds and characters beyond herself and the minimalistic set. The lighting by Saul Valiunas and sound design by Rob Donnelly-Jackson help to construct the locations of each monologue, transporting the audience to places such as a hotel room, a press conference and a war zone.

Presented with questions around “what makes a successful apology?” and “is an apology effective, without remorse?”, each writer for the three monologues takes on a unique approach and style to answer them.

In the first of the three, Excuses by Iskandar Sharazuddin, Scawthorn portrays Louise, the first female Chief Executive of the NHS. Louise is forced to give a very public apology after she makes an off-hand remark to an Indian doctor that is perceived as racist by the doctor and the general public, although she does not think it is. Measured, formulaic and scripted in style, the press conference that Louise gives is polished and disingenuous in the way of all such PR speeches. Partway through the monologue the mask is lifted, and we see inside Louise’s thought process and explore her own feelings around the matter. Was what she said racist? “No”, she implores to the audience, “I am not racist; I wrote a paper on racism in the NHS. Yeah, a PAPER.”

Sharazuddin’s piece has a lot to say about the way in which the public nature of apology functions in contemporary British society. The carefully-measured performances of such apologies in PR crisis-management tactics are often more about what the public wants to hear rather than what the apologist themselves actually wants to say. In an age of ‘cancel culture’, Sharazuddin’s piece reminds us to look beyond the public figure and see the real and flawed human person behind the mask.

In the second monologue, Cordelia O’Neill’s Seven, The Sweetest Hour, Scawthorn transforms into shallow social media influencer Holly. In this piece, Holly is forced to face up to the repercussions that her online influence has when tragedy strikes. Here, Scawthorn is able to flaunt her acting skills by switching between the stoic Holly and the eccentric owner of the hotel she is staying in. Unlike the other two pieces, Seven, The Sweetest Hour takes an almost humorous approach to its subject matter, satirically discussing all the different elements and perfectionism that go into a life as a popular influencer. It’s funny, even hilarious, until it’s not. O’Neill’s work, much like Sharazuddin’s, presents us with the dichotomy of the public versus private, and the harrowing sense of failure that can come with such a glamorous public facade.

O’Neill’s exploration of apology is a complex one. Holly is forced to face the effects of her social influence when the owner of the hotel kills themselves due to Holly’s negative review. It is a complex position to be placed in, and though she feels directly responsible she is also being told it is not her fault by her PR team. The fault, she is told, lies with the person who killed themselves, rather than with her. It is an important and timely exploration of the effects our online presence can have on others. Are we responsible for our actions online in the same way as real life, or are there different rules? Does the glitz of an Insta-feed make us more, or less, accountable?

The third and final monologue takes a particularly sombre and dark turn in both subject matter and tone. Lucinda Burnett’s New Universe asks if an apology is ever truly enough, especially if the damage of the action has already been done. Here, Scawthorn takes on the role of Sienna, a senior manager at a large international charity who worked in the field until she was brutally raped by a colleague. Sienna is placed in a difficult position when the unnamed charity comes under fire as it comes to light that two of their workers withheld aid from female refugees in exchange for sexual favours. Perhaps her best performance of the night, Scawthorn’s emotional intelligence shines through and I can’t help but feel my heart break as her voice cracks. Through its emotive combination of performance and writing, New Universe is a disturbing and frightening exploration of trauma without resolution, of victimhood and what is really means to ‘apologise’; does an apology ever really solve anything; who needs to apologise and how?

In a post-#MeToo world where discussions around sexual assault and consent have increased tenfold, New Universe opens up a particularly important conversation about this issue in the philanthropic sector. It forces us to look at our own actions and beliefs, and re-examine how we can better identify sexual abuse and how we can be better at supporting victims. Inspiration for this piece must certainly have come from the Oxfam sexual abuse scandal in Haiti from 2018, an event that rocked the UK and had implications worldwide. We must ask again, is an apology ever truly enough?

Overall, The Apologists is a dynamic, engaging and complex piece of theatre. The solid writing combined with Scawthorn’s excellent performances make for a thought-provoking hour. My main critique would be that the content sometimes feels repetitive; at certain points you are ready for the discussions to move on before the monologue is finished. However, in an age of social media influence, ‘cancel culture’ and #MeToo, The Apologists is a timely piece of work.

The feature image is a production photograph and shows Gabrielle Scawthorn standing on a darkened stage in front of a lecture podium. Three stage lights can be seen over her head. She is holding her right arm up with her fingers in a claw position as if she was about to grab something or scratch someone. Her mouth is in a grimace. She wears a long-sleeved grey top and smart trousers.