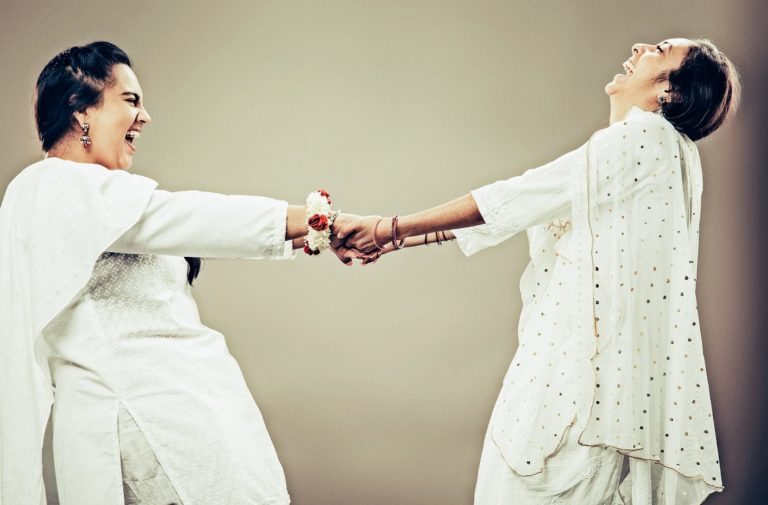 Women-led work at the VAULT Festival 2020

One of two shows by production company The Thelmas at this year’s festival, Santi & Naz focuses on two friends growing up in the shadow of the looming 1947 partition of India. The production beautifully incorporates dialogue and movement, moving backwards and forwards through time. Sarah Sayeed’s sound design is particularly good. Actors Ashna Rabheru and Rose-Marie Christian give excellent performances, portraying well the naivety and inquisitiveness of children. Rabheru as Naz asks: “Why do we need to learn English if they’re leaving?”, earning a well-deserved laugh from the audience.

Guleraana Mir and Afshan D’souza-Lodhi’s writing gives a strong sense of the powerlessness of the young girls as the men around them make decisions that will shape their future forever. It is impossible to convey the full complexity of the events leading up to and following the partition in one one-hour play, but it does mean that an impression is given that all was calm and peaceful before independence which is not of course true. However, as Dr Eleanor Newbigin of SOAS explains in the accompanying freesheet: “personal experiences are the stuff of which ‘big historical narratives’ are made”. How can we tell the bigger stories if we don’t hear the smaller, partial stories from everyone?

The ending feels a little rushed and I am not entirely clear what finally happens to the girls – however this leaves me hungry to learn more about the partition, which is in itself no bad thing. In Push, Popelei’s artistic director, performer Tamsin Hurtado Clarke with her baby bump muses on what it means to discover you’re about to be a mother when you’re 35 and you’ve never wanted children. Hurtado Clarke uses dance and spoken word to explore her themes, cleverly employing repetition to explore ideas.

We meet her at the instant when she’s looking at the pregnancy test and waiting to see what it shows, and from there the show moves backwards and forwards in time. She talks about the different stages of pregnancy and what motherhood meant to her mother and grandmother. Hurtado Clarke is a charming performer and there’s a truthfulness and honesty to her performance which makes it hard not to connect with her.

With such a thorough exploration of ideas, I’m a little surprised that Hurtado Clarke never considers having an abortion – which if you don’t want children must surely be an option. However, as the hour-long show progresses we delve further into the upsides and downsides of pregnancy with increasing levels of ambivalence, and there is a surprising end to the journey. Push is a neat and enjoyable piece of writing and choreography. These Girls and The Pleasance’s Bible John by Caitlin McEwan tries to work out why true crime stories seem to be so popular with women. The four excellent performers, Renee Bailey, Carla Garratt, Caitlin McEwan and Louise Waller, narrate the piece between them, stepping into character as four temps who bond over a fictional podcast about a real-life crime – the murders thought to have been committed by the unidentified ‘Bible John’.

The way the company weave dancing, projection and sound into the show is very effective. The three victims of Bible John all met him when they were out dancing at the Barrowland Ballroom in Glasgow and the juxtaposition of carefree dancing with violent murder works well. I’m slightly confused why some props in the show exist but some don’t – there’s something a bit odd about miming a mobile phone. But in any case the deceptively simple staging is very effective.

The show does try, however, to have its cake and eat it. The characters discuss whether it’s really all right to exploit these hideous crimes for entertainment, then go ahead and do the exact same thing themselves. There’s a message in here somewhere about violence against women and whether we’ve created a culture which glamorises killers instead of their victims but I’m not sure it’s clear enough.

Some of the humour however relies on cultural references that go over my head, although the majority of the audience seemed to catch them – which ironically may identify me as an immigrant myself Ask Me Anything
Reviewed by Lissy Lovett

To create Ask Me Anything, theatre company The Paper Birds worked with three schools and three youth theatres. They told the young people they could ask them anything and their answers to the some of the questions forms a lot of the source material for the show. The teenage bedrooms of the three performers – Georgie Cole, Rosie Doonan and Kylie Perry – have been recreated on stage and they use music, filming and extracts from their own childhood diaries to give as good answers as they can manage.

There’s an awful lot of tech in this show. Three screens show different things – perhaps the shot from a camera on stage, some explanatory text or a video of someone else answering one of the questions. That this all works so seamlessly and is balanced with the onstage action is very impressive.

As the show continues it becomes less about the individual questions and more about how as a grown-up you actually never really figure everything out. Looking back at it, I’m not sure they really answer anything at all. There’s a lot to admire in Ask Me Anything but although it never promised to give all the answers, I don’t think it really says anything new. Notch is a one-woman show also from The Thelmas. Danaja Wass draws on her own experiences as an immigrant from eastern Europe living in Dublin. She shifts seamlessly in and out of the different characters that the protagonist encounters, cycling through a range of accents and postures that make each of them distinct.

Taking a brutally honest look at the issues of homelessness, mental health, immigration and xenophobia, Notch is extremely relevant at the moment. It also explores unrequited love, sexual assault and the political and cultural background of the unnamed home country of the protagonist. While all of these topics are worth talking about, it might have been better to focus on a smaller number of themes, but to treat them more in depth and with more clarity.

Funny moments are interspersed very skilfully with the more serious points that the show makes. Some of the humour however relies on cultural references that go over my head, although the majority of the audience seemed to catch them – which ironically may identify me as an immigrant myself.

The erratic jumps in tone, theme and narrative may be explained by headlines for each section shown on a TV in the background, but without a clear structure the show is hard to follow at times. The mid-sentence ending, however, works very well and makes the show feel as unfinished as the protagonist’s life. Notch has a lot of potential, but could use a bit more development to convey its ideas in a clearer and more engaging way.

The VAULT Festival runs until 22 March.

The feature image is from Santi & Naz and is by Greg Goodale. It shows performers Ashna Rabheru and Rose-Marie Christian holding hands and leaning back from each other across the photograph. They both wear white salwar kameezes and Christian has a band of flowers around her wrist. They are both laughing. They stand in front of a very light brown background.

The second image is from Push. It shows performer Tamsin Hurtado Clarke sitting on a blue chair in profile. She wears a tight black dress and you can clearly see the outline of a pregnancy. The background behind her is a dark yellow. She has short hair and looks assuredly towards the camera.

The third image is from Bible John and is by Ali Wright. The four performers are on a darkened stage with a projection screen just visible behind them. Caitlin McEwan is standing on a chair while she explains something to the other three who are listening. Carla Garrett and Renee Bailey are seated and Louise Waller is standing. They wear everyday clothes and each have a pair of blue headphones around their necks.

The fourth image is from Ask Me Anything and is a wide shot of the stage. Each of the three performers is in a mock-up of their teenage bedroom. On the far left, Georgie Coles is behind a drum kit. In the centre Rosie Doonan plays the guitar. On the far right Kylie Perry sits on the floor looking at something on her bed. There are two screens behind them and lots of lights. The front rows of the audience can be seen in silhouette against them.

The fifth image is a production photograph from Notch by Steve Gregson. It shows performer Danaja Wass standing on stage next to a tv screen. She stands with her arms by her side looking up and to the left. She wears blue jeans, a green t-shirt with picture of a shamrock on it and a hoodie. On the tv screen is a very blurry image of a man with a moustache, perhaps military, talking.