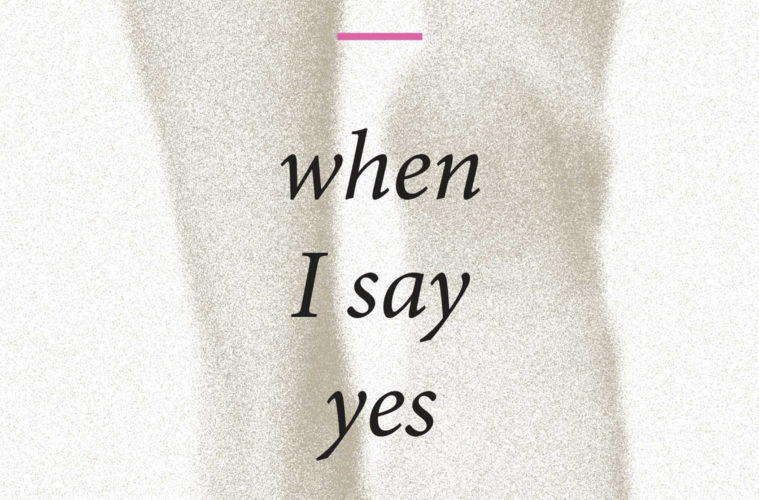 Sexuality, power and social justice in the #MeToo era Almost three years after its massive popularisation, following the exposure of extensive sexual abuse allegations against film producer Harvey Weinstein in October 2017, the #MeToo movement has gone some way to being consolidated as a tool of sisterhood, growth and empowerment against gender-based abuse of power. Backed by the overwhelming numbers of testimonies around the world, #MeToo has become a feminist campaign driven by empathy, solidarity and support. All of which are fuelled by the outrage and courage of women sharing, often for the first time, their own experiences of sexual harassment.

When I Say Yes has gained its well-deserved place within the #MeToo timeline. The book unpicks many of the global concerns and sensitives surrounding the movement and stitches them together in a string of powerful and reflective statements, deliberations and, often kept unanswered, questions. By doing this, author Carolin Emcke makes it clear that there’s no turning back for #MeToo and that issues surrounding power, sex and gender can no longer be ignored.

When I Say Yes looks at obvious and also unnoticeable cases of abuse of power. It examines how power is created and executed from a Foucauldian point of view, in which power is not just a tool of oppression but a way to produce reality. Emcke questions the factors that interact to create dominant and submissive attitudes in men and women and how this reflects on the reality of their identities.

The intricacies between desire and power are unreservedly present in the book, at a time when judgements on the limits of appropriate ‘touching’, verbal consent and truth are desperately needed

Emcke borrows most of her ideas from the critical belief that words shape our understanding of reality. For example, she reflects on the silence that often surrounds domestic violence and on the importance of exposing the problem in order to fight it. Drawing from Betty Friedan’s unspeakable “problem”, Emcke emphasises the need to name domestic violence:

The intricacies between desire and power are unreservedly present in the book, at a time when judgements on the limits of appropriate ‘touching’, verbal consent and truth are desperately needed. Similarly, shame and pleasure share a toxic and complex relationship that Emcke tries to untangle, contemplating the only element that truly matters in any sexual encounter: a ‘yes’. This is not without acknowledging the complexity of sexual epistemologies:

It is unsettling not to know whether another person understands our gestures, our words, the way we intended them. […] And yet – taking pleasure in the other person’s pleasure is indispensable. […] Whether that takes place in parks or in beds, in toilets or in sofas, whether the encounter is between strangers or longstanding partners – what matters is mutual arousal.

When I Say Yes makes a strong case for intersectional social justice. Emcke invites privileged groups to speak up for vulnerable minorities, including but not limited to those who are victims of sexism, classism, racism or homophobia: “I can criticize ruthless housing policy and sexist language”. In this way the author rejects hierarchies in oppressive practices and makes a defence for the fight against all forms of injustices.

While blatantly relevant in today’s sociopolitical scene, this is not groundbreaking work with different and innovative approaches to equality. For avid feminist readers, it won’t disclose radical views not already found in the broad range of gender and sexuality literature. That said, its passionate tone, ruthless authenticity and compactness is why When I Say Yes is a worthy read within the #MeToo genre.

Emcke takes the reader through a journey of deep introspection, chapter by chapter, as she draws from her own personal experience to tackle such complexities. She addresses each of the subjects from her acknowledged white and middle-class privilege to the vulnerabilities of her female and queer self. In this raw and genuine piece, Emcke constantly interrogates her own beliefs, attitudes and actions. This is what makes When I Say Yes an incredibly relatable and plausible read with the capacity to empathise with its readers.

The text is based on a stage performance, which premiered in Berlin in 2018. In fact it’s quite clear that it was written to be spoken. Or first spoken and then written. It mostly feels like a transcription of Emcke’s thoughts, with her most inner truth and passion, her human incoherence, self-doubts, mistakes and corrections. Because of this Emcke isn’t consistent in her tone. She uses different registers in every chapter. When I Say Yes might feel like a conversation in a pub, a lecture in a conference or a poem at a spoken word gig.

From a non-fiction perspective, one might flag that the book lacks structure. It’s a waterfall of very personal images translated into words and organised in short-form: sometimes essays, sometimes stories, sometimes lessons. None of them include a title, a thematic hint or a traditional narrative. However, this apparent chaos is the glue that holds the piece together. It lacks structure because the intricacies of abuse, desire, power and truth have no universal order. It’s halfway through the read that I realise how necessary the lack of order is to convey the author’s message. The book might seem confusing, but it’s just as confusing and complex as the intersection between sexuality and power.

When I Say Yes is an odd yet beautiful volume with a rebellious message and relatable stories. Emcke has produced a genuine piece that sparks outrage, doubt and hope at the same time. But mostly, serves as a powerful tool to fight the burden of #MeToo at a very convenient time.

When I Say Yes by Carolin Emcke is published by Polity. The cover image is used with the publisher’s permission. The cover is a faded grey close-up image of the back of somebody’s feet. One foot is slightly raised, giving the impression that the person is walking away. The author’s name, Carolin Emcke, appears at the top of the cover in capital letters. Underneath is a small pink dividing line and then the title of the book, When I Say Yes, in lower case.