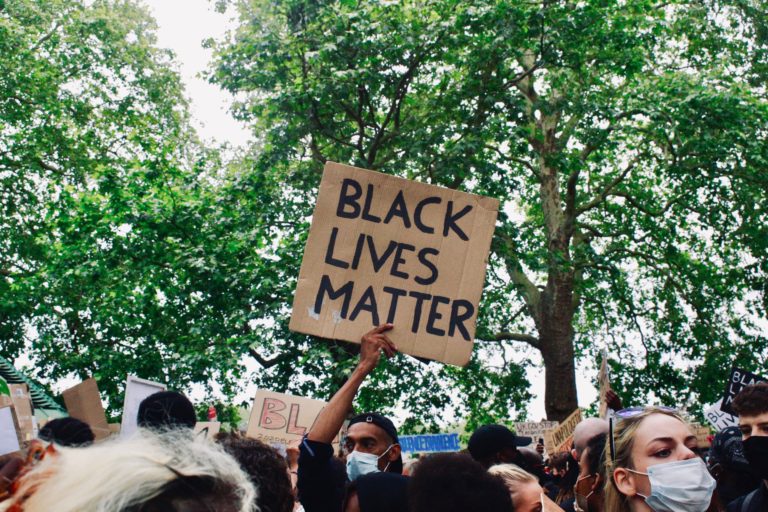 The F-Word’s suggested list of BLM reading and resources

If you feel we have missed out important resources or articles, please comment on this post or respond on Twitter/Facebook. We will continue to update this post with links suggested and other resources as they become available.

As with weekly round-ups (and indeed all posts on The F-Word), racist, sexist, homophobic, transphobic and disablist comments will not be tolerated and will be deleted immediately.

Ways you can help:

Donate to the UKBLM FUND.

Check out https://blacklivesmatters.carrd.co/ for petitions, resources, donation suggestions and more.

From the video: “100% of the advertisement revenue this video makes through AdSense will be donated to the associations that offer protester bail funds, help pay for family funerals, and advocacy listed in the beginning of the video.”

What to do if you can’t protest on the streets for BlackLivesMatter (Melz, gal-dem)

From the article: “Protest has the function of agitating the state, though I believe it’s more moving function is one of collective catharsis. It gives us a place to channel and externalise the rage and hurt that runs through our veins each day in this white supremacist world. Still, the conflict remains – how many more lives may we put at risk by taking to the streets during a pandemic?”

8 educational black voices to listen and learn from now (Vogue)

5 of the most powerful documentaries on systemic racism you can stream right now (Hayley Maitland, Vogue)

From the article: “‘Listen to your body and honor what it’s telling you,’ Gardner says. ‘Does that mean more sleep, more water, less phone interaction, or experiencing joy and play? Whatever it is, do more of it and incorporate other things that will lift you up. You’re allowed to take care of yourself. You’re allowed to experience peace and pleasure.’”

We need to rethink our “pics or it didn’t happen” approach to activism (Yomi Adegoke, Vogue)

Why are Black women an afterthought in our outrage over police violence? (Brittney Cooper, Time)

From the article: “Femininity is a weapon only if you’re white. Black women have no such protections.”

The best way to “reform” the police is to defund the police: an interview with Alex S. Vitale (Meagan Day, Jacobin)

You can listen to a podcast based on Gary Younge’s article HERE.

From the article: “The music industry’s response to racism is not something I can continue to feel complacent about any longer. Most of what I have read online from various sources has been lazy enough to omit any sense of personal responsibility in favour of referring to ‘white people’ as some kind of generality or pushed the notion that they are ‘standing in solidarity’ with the black community. Standing in solidarity how? People have spoken about privilege but there has been very little airing of personal and professional failings. If we are to have this conversation seriously, individual and corporate accountability needs to be voiced.”

What is an anti-racist reading list for? (Lauren Michele Jackson, Vulture)
From the article: “The syllabus, as these lists are sometimes called, seldom instructs or guides. It is no pedagogue. It is unclear whether each book supplies a portion of the holistic racial puzzle or are intended as revelatory islands in and of themselves. Aside from the contemporary teaching texts, genre appears indiscriminately: essays slide against memoir and folklore, poetry squeezed on either side by sociological tomes. This, maybe ironically but maybe not, reinforces an already pernicious literary divide that books written by or about minorities are for educational purposes, racism and homophobia and stuff, wholly segregated from matters of form and grammar, lyric and scene.”

What should we do with videos of police brutality? (Kemi Alemoru, gal-dem)

Prepare to cackle, weep, and live for the British PoC authors up for the Chalk Prize (Leah Cowan, gal-dem)

There’s one big reason why police brutality is so common in the US and that’s the police unions (Melissa Segura, BuzzFeed News)

From the article: “Many other families, predominately black, we have heard our loved ones say ‘I can’t breathe’,” she said. “People think it’s only happening in America. It’s not, it’s happening here.”

So What Now?: Black Erasure in the British Food Industry (Melissa Thompson, Vittles)

From the article: “In The Times’ Top 100 UK restaurant list — compiled by critics Giles Coren and Marina O’Loughlin — no place is listed where food from an African country or any Caribbean island is served. Between the Guardian, The Observer, The Telegraph, Financial Times, The Times and The Sunday Times, there have been only two reviews of a restaurant serving African or Caribbean cuisines in the last 10 years, excluding restaurants like Ikoyi and 12:51 which are Black-owned. One was Giles Coren’s review of Roti Stop, in which he included a reference to stabbing. The other was Jay Rayner’s review of Norwood’s Bluejay Cafe in the Observer Magazine edited by Stormzy. Perhaps representation among writers isn’t enough, we need more Black editors, and more Black executives to ensure more inclusive coverage.”

White people – this is why it’s vital you speak out against racism, even if you’re scared (Natalie Morris, Metro)

From the article: “Now is not the time to be afraid to say the wrong thing. The fight for equality is so much bigger than individual fears of awkwardness, and this is an opportunity to put your privilege to good use and help enact meaningful change.”

The UK is not innocent – police racism has a long and violent history here too (Wail Qasim, Novara Media)

From the article: “When police brutality in the UK is protested, a common response is that policing is proportionate to greater criminality and serious violence in certain areas. This claim was in fact used to loosen controls on Section 60 searches by former home secretary Sajid Javid last year. Repeated reference to the supposed criminality of areas populated by black and other people of colour is a distraction. By creating this association, the UK offers up its own version of the ‘black-on-black crime’ myth, suggesting that increased police presence and powers are for a community’s ‘own good’.”

From the article: “It’s important to see Trumpism as just one part of a broader international ‘whitelash’, as the racial order in contest here is an international one, almost by definition. The early struggles for civil rights and racial equality in the US and the wider West were intimately connected with simultaneous struggles for autonomy and against colonial rule in the Global South. The relative success of those struggles has proven deeply unsettling for a class of people whose sense of self-esteem has for centuries been invested in a racialised belief in their own superiority, whether expressed in biological or ‘cultural’ terms. The loss of empire through repeated political and military defeats at the hands of those long deemed inherently inferior has proved to be more than many of these people are able to bear. Racialised anxiety about Britain’s global decline and a persistent desperation to reverse it has been a central feature of the great spasms of British conservatism in the post-colonial era.”

It does not matter if you are good – on Oscar Jimenez, George Floyd, Christian Cooper and the myth of being unthreatening (R. Eric Thomas, Elle magazine)

Reni Eddo-Lodge: ‘The debate on racism is a game to some and I don’t want to play’ (Nosheen Iqbal, The Guardian)

From the article: “Back then, everyone was very buoyant on the back of Caitlin [Moran]’s book How To Be A Woman and feminists were excited by this tweeness. They felt black feminism posed an extreme threat to the organising they were trying to do and kept calling us divisive. I found it strange that presented with a perspective on feminism that didn’t fit with their priorities of shutting down lapdancing clubs and banning pink toys, they were very hostile. I think that generally in, say, relationships when you’ve been alerted to being in the wrong, you might accept that usually that leads to some level of accountability. You might think about how your behaviour was harmful to another person, and how to do better. I’m not really seeing that.”

From the article: “‘Following the letter’s circulation, I saw my inbox fill with CC’ed emails from colleagues who angrily rejected the open letter,” wrote Ifekoya. ‘Some responded by arguing that all staff matter, as if the mere mention of BAME workers takes attention away from white people. . . . This language reveals a lot about what my coworkers think it might mean to center the needs of people of color. These complaints came mostly from senior staff members and, as of today, their comments remain unchallenged.’”

From the article: “While change needs to happen behind the scenes, a powerful shift in attitude and approach to artists can also come from those in front of their record player who are fans of Black artists. As a Black musician myself, I’ve always wondered how committed white members of my audience are to the person behind the songs they claim to love.”

The day Bristol dumped its hated slave trader in the docks and a nation began to search its soul (Tom Ford, Guardian)

From the article: “I am ashamed that the organisation for which I work [the Royal Opera House], has chosen to exercise the privilege of staying publicly silent about the racist murder of the African American George Floyd, proactively choosing to ignore #blackouttuesday, as it has always publicly ignores Black History Month, when so many of our contemporaries have chosen to use their considerable influence to publicly stand alongside their black and BAME employees and the black and BAME communities more widely, in this devastating and traumatic moment.”

The image is used with thanks to Alessia Galatini. It is a photograph taken at a London Black Lives Matter demonstration. The image shows a crowd of protestors, with all those visible wearing face masks. They are in an area surrounded by trees. In the centre of the crowd is a person wearing a hat – possibly a baseball cap turned backwards. The person is holding a cardboard sign aloft which reads ‘Black Lives Matter’ in capital letters. Other people holding signs can be seen in the background.