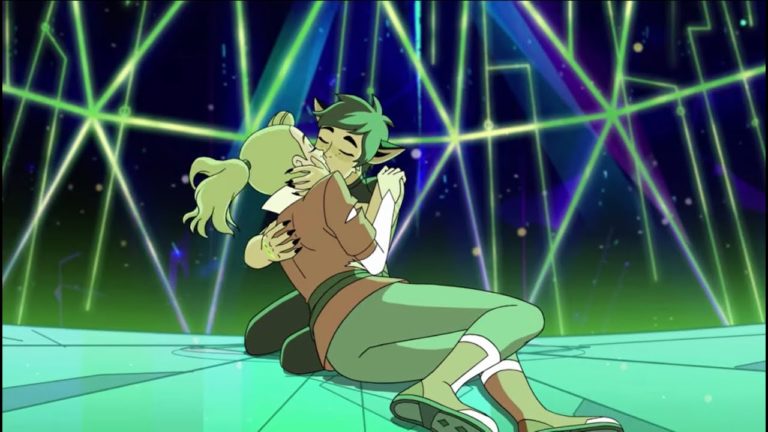 The unapologetic queerness of She-Ra

qFor as long as children’s media have existed, LGBTQ+ characters and relationships have been almost entirely excluded from it. Growing up in the UK at the turn of the 2000s, like many children at the time, I connected with the characters who were what we would now call “queer-coded”. These were the characters, such as Raven from Teen Titans and Shego from Kim Possible, who were outcasts and misfits. Their social identities were situated on the periphery of their show’s conventional norms; an entirely relatable trait for a child who had a hard time understanding their own feelings.

Despite the almost century-long history of children’s animation, it has not been until fairly recently that overt queer representation has begun to appear on our screens. The early 2010s saw a steady and careful increase in characters and relationships that were queer-coded and queer-aligned, rather than openly queer. The ambiguity of queer-coded representations was used to test the water by observing the reaction of audiences to queerness.

If a programme had shown its hand too early by representing a queer character or relationship before the cultural landscape allowed for it, it risked widespread criticism, questions of morality and cancellation campaigns. Elements of queerness were coded in nuance moments, subtexts in the dialogue, character designs and a variety of other factors. The coding of these elements into subtext meant they could be simultaneously read as queer and non-queer, depending on the audience, in order to tip-toe along the invisible social line dictating what was and was not allowed on Western children’s network television. At the time, animated television shows such as The Legend of Korra and Adventure Time were both excellent at this practice of ambiguity.

The Legend of Korra, in particular, utilised this practice in the relationship between lead characters Korra and Asami, which was acknowledged as explicitly romantic by its creators only after the final episode had aired via a Tumblr post. Whilst the show’s previous seasons had seen a strengthening relationship between the two and their romantic moment was set to tender music and lighting, it had to be positioned within a framework of acceptability set out by the network so it could air.

However, as the 2010s continued, showrunners were emboldened by the not-so-completely-negative reception that queer characters and relationships in children’s animation were receiving. This led to more open, bold and complex representations of queerness in shows such as Adventure Time, Steven Universe, Duck Tales, The Dragon Prince and the Age of Wonderbeasts. As one example, the wedding between characters Ruby and Sapphire in Steven Universe was heralded as a huge watershed moment for LGBTQ+ representation across the entire spectrum of children’s media and entertainment. It is this that brings us to 2018 and the premiere of Netflix/Dreamworks She-Ra and the Princesses of Power. The show, developed by Noelle Stevenson, is a modern reboot of the 1985 She-Ra: Princess of Power cartoon. Set in the world of Etheria like its predecessor, it tells the story of Horde soldier Adora who gains magical powers that allow her to turn into fabled hero She-Ra. With her newfound powers, she leaves the evil Horde and joins the side of the Rebellion, a group fighting back against the Horde and its leader Hordak.


For far too long, LGBTQ+ people working in children’s media could not openly bring their queer selves into the shows in which they were creating. But from its very first season She-Ra stripped LGBTQ+ representation of any ambiguities or superficialities, something that only grew bolder as the seasons went on
Over the show’s five-season run Stevenson’s She-Ra has received critical acclaim for its diverse and wide-ranging representation of LGBTQ+ characters and relationships, alongside an inclusive depiction of racial groups, body types and abilities. The show’s fifth and final season, which dropped on Netflix on 15 May, has single-handedly taken queer representation in children’s media to an entirely new level and has risen the bar for every show that follows it. The inherent diversity and intersectionality showcased in She-Ra is down to, I believe, the fact that the show is helmed by a showrunner who is LGBTQ+ herself. In this way, She-Ra is a shining example of queer creativity and a new precedent for what can be achieved when LGBTQ+ people are allowed to tell the stories they want to tell.

For far too long, LGBTQ+ people working in children’s media could not openly bring their queer selves into the shows in which they were creating. But from its very first season She-Ra stripped LGBTQ+ representation of any ambiguities or superficialities, something that only grew bolder as the seasons went on. From the wife-and-wife team Spinerella and Netossa, to non-binary shape-shifter Double Trouble, to main character Bow’s two dads, She-Ra has an assortment of openly queer characters.

What makes She-Ra even more original is the central relationship between main characters Adora and Catra, best friends who ended up on opposite sides of the war for Etheria. Built over five seasons, their relationship changed and developed across the course of the narrative, moving the two further away from each other as the tensions are hiked before inevitably drawing them back together. Constantly entwined in one way or another, the two characters’ arcs are inextricably linked to each other. From the very beginning, fans theorised their relationship as more than friendship. Rising above queer baiting tropes, the underlining attraction was fully confirmed at the end of the final episode which saw them share a declaration of romantic love and a kiss. This central relationship is a huge step forward in LGBTQ+ representation as it places queerness at the very forefront of the show. It tells the world that queerness can no longer be pushed to the back of the screen and called “representation”. It is central, important and a necessary fact.

For me, as an adult who was denied queer representations as a child, it is an incredibly healing thing to see.

She-Ra and The Princesses of Power is now streaming on Netflix.

Images courtesy of IMDb.
Image description:
1. The cover image depicts the iconic scene from She-Ra’s latest season, where the main characters finally share a kiss. Adora lies on the floor while Catra pulls her head up and gives her a passionate kiss.
2. A still from Kim Possible depicting a physical fight between Kim and Shego, who is often interpreted as a queer-codied villain.
3. A still from The Legend of Korra. In the show’s final scene, the two main characters stare into each other’s eyes while holding hands. They stand in the middle of a ray of light.
4. A still from She-Ra depicting an ambiguous moment between Adora and Catra, where Adora is pulling Catra closer to her by tugging at her shirt. Their gazing could be interpreted as romantic.