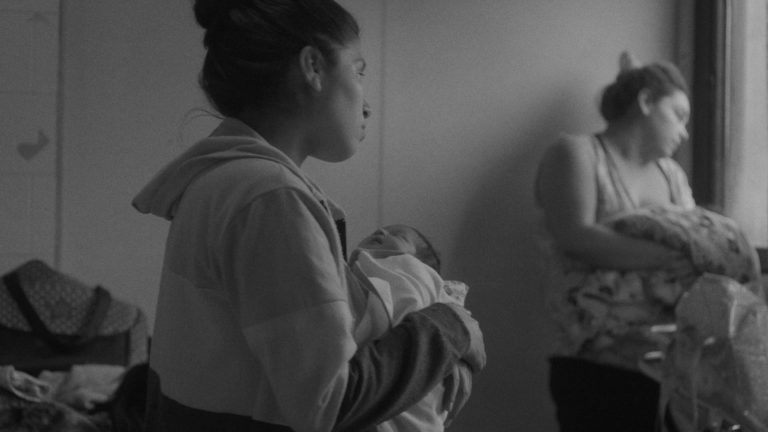 It is that time of the year again: The F Word reports from Sheffield Doc/Fest, the UK’s biggest international documentary film festival.

Since 2013 we have managed to send one, sometimes two, journalists to Sheffield to watch films and interview filmmakers (and party!). This year, like so many other film festivals, Sheffield Doc/Fest moved almost entirely online with some screenings tentatively planned for cinemas in the autumn, like British director Lynne Ramsay’s portrait of photographer Brigitte Lacombe. As I can stop and rewind the films as I please (but also just abandon them half-way…) and as all Q&As and sessions take place on Zoom, this year’s experience is very different from the exciting festival buzz.

The opening good news is that two women filmmakers are subject of special focus this year. First, the festival pays tribute to Sarah Maldoror, pioneering filmmaker from French West Indies who died on 13 April of Covid-19 at the age of 90. One of the first women to direct a feature film in Africa, she went on to make more than forty films, mainly documentaries. Seeing cinema as a tool of revolution, in her work she sought to encourage radical changes in society. Maldoror’s anticolonial short Monangambée (1969) will be hopefully shown on the big screen in the autumn.

Secondly, the festival presents a selection of five films by American experimental filmmaker Lynne Sachs (from 1994 to 2018), mostly involving creative collaboration with others. I watched The Washing Society (2018), co-directed with Lizzie Olesker, which peeks behind the scenes of some of Atlanta’s surviving downtown launderettes, highlighting invisible and often unacknowledged labour of launderette attendants through performance and re-enactment. With its title a tribute to the 1881 manifesto by an organization of African-American laundresses, the film also looks into the future, documenting the disappearing world of laundrettes as large facilities on the outskirts of the city take over.

Albeit set in very different contexts, the films draw attention to the ongoing struggles contemporary women face, and not just in the countries depicted

Among short documentaries, two films by British women filmmakers paint a picture of the country marked by austerity and labour disputes. In Breadline (2020), Carol Salter offers a close observation of a volunteer-run food bank in the small coastal town of Fleetwood, while Hazel Falck’s United Voices (2019), commissioned and co-produced by The Guardian, spotlights the strike of cleaning staff at St Mary’s hospital in London organised by United Voices of the World, a members-led, campaigning trade union.

Two documentaries that I want to recommend from this year’s selection are Deepti Gupta’s Shut Up Sona (2019) and Andrea Testa’s Mother-Child (2020). Albeit set in two very different contexts, the films draw attention to the ongoing struggles contemporary women face, and not just in the countries depicted.

In Shut Up Sona, filmmaker Deepti Gupta follows Indian singer-songwriter and feminist activist Sona Mohapatra as she tirelessly fights misogyny and patriarchal structures in Indian music industry while touring and meeting her fans. During a Zoom Q&A, Gupta says she approached Sona with an open mind, wanting to make a film celebrating music and the joy of singing, but the parallels with her own professional life quickly became obvious. Having trained as a cinematographer, Gupta experienced gender-based discrimination in her professional life first-hand, which prompted her to start the Indian Women Cinematographers’ Collective – which now boasts around 80 camerawomen members across the country. The mood of the film is firmly set in the opening scene in which composer Ram Sampath, Sona’s husband and collaborator, asks her if she is willing to talk to the press before the gig. The singer is upset that the journalists don’t want to stay for the show, clearly more interested in her make-up and clothes than her songs. “I don’t care if they write something negative,” she scoffs.

But being an outspoken campaigner for women’s equal participation in India’s music industry has its price. Sponsors often withdraw and religious associations want to take her to court for allegedly blasphemous lyrics of songs in which she reclaims 16th century women poets as rebels celebrating their exuberant sexuality. Whether dealing with the lawsuits or internet trolls, Sona emanates seemingly never-ending energy. “I need Red Bull?” she asks rhetorically to one of her assistants, “I am Red Bull!”. Her onstage presence is magnetic as she masterfully fuses pop, folk, Bollywood and rock, much to the audience’s enthusiastic response. Unabashed activist, she is first and foremost an artist and performer who loves her work and doesn’t want to be pigeonholed.

Moving from the noise and spotlight of Sona, Andrea Testa’s Mother-Child feels austere and subdued, the feeling compounded by black-and-white footage. The documentary is based in a public hospital in Argentina where girls and young women talk to doctors and health workers about the decisions they need to take about their pregnancies or early motherhood. As it’s purely observational, the film doesn’t fill the viewer in on the legal status of abortion in Argentina but it slowly becomes clear that the procedure is only legal in exceptional cases including when the conception is a result of rape or when the woman’s health or life is in danger. It is a testament to the power of non-interventionist observational documentary how the bigger picture and societal norms seep into slow-paced, respectful conversations between the girls and non-judgmental health professionals. Even though they are given that legal option, very few young women opt for termination and there are multiple references to pro-life campaigns exposing them to scare-mongering visual materials. The prevailing stigma against abortion is made obvious as several women cry when they realise they need to have termination.

The anonymous hospital in Argentina resonates with the global situation as 41%of women live under restrictive abortion laws and, according to the World Health Organization, 23,000 women die of unsafe abortion each year

The chilling scene that stayed with me is of a pregnant thirteen-year-old who calls her pregnancy a ‘blessing’ and adds, unfazed, that she is considered high risk as her womb is not fully developed. The love and tenderness with which these mother-children (or niña mamás in Spanish) tend to their own children is heart-breaking. The majority of young women featured in the film seem resigned to their fate: not bothering with contraception at all; accepting that their male partners will refuse to use condoms; seeing having more children as a given, not a choice. On the other hand, those who want most reliable methods of contraception are often told about long waiting lists. The anonymous hospital in Argentina resonates with the global situation as 41% of women live under restrictive abortion laws and, according to the World Health Organization, 23,000 women die of unsafe abortion each year.

It was a pleasure to see that the breadth of the festival selection wasn’t impacted by its newly-found online platform. Having said that, I am definitely looking forward to the IRL edition of Sheffield Doc/Fest next year.

Images courtesy of Sheffield Doc/Fest.
Image description:
1. A black and white still from “Mother – Child” showcases a young woman with her back to camera rocking an infant while looking into the distance. Another woman in a similar position can be spotted in the background.
2. A still from “The Washing Society”. An elderly woman in a launderette fixes her collar with the help of a younger lady. They both wear floral uniforms.
3. A still from “Shut Up Sona”. The main subject Sona is depicted on stage, singing passionately. She has pink hair and wears a bold red dress.