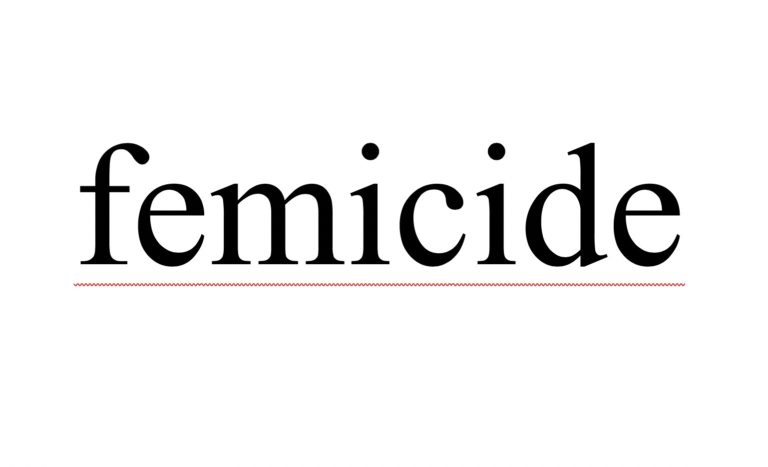 Awareness of femicide can save lives

At this point in the Covid-19 pandemic, we’ve already seen the spike in cases of violence against women that take place at home. The domestic abuse charity Refuge has reported a 25% increase in calls and contacts to its National Domestic Abuse Helpline since the UK went into lockdown. This increase has put the problem of femicide under the spotlight. Femicide happens every day and reaches all corners of the globe. Yet many of us don’t know the extent of this horrible reality, and the word ‘femicide’ is not in our common vocabulary. Why is femicide a problem that is kept on the hush? And what can we do to raise awareness of it?

The word femicide simply means the intentional act of killing a woman, almost always by a man. Women are killed everywhere in the world, every day, simply for being women. In some countries baby girls are at risk of being intentionally killed because of bias against women: for example, in societies where dowries are the norm and thus where girl children are seen to pose a financial burden. This is called female infanticide. Many girls are at risk of child marriage, in which they also have a higher risk of experiencing violence. Girls who marry before the age of 15 are 50% more likely to experience physical or sexual intimate partner violence than those married after age 18, according to Girls Not Brides.

In adolescence and adulthood, women run a greater risk of being killed by their current or former partner than do men. Femicide also occurs when women and girls become the victims of ‘honour’ killings during adolescence or adulthood. This happens when they are seen to have committed a transgression in their sexual behaviour, such as by becoming pregnant outside marriage, committing adultery or surviving rape. Honour killings may also be committed to cover up cases of incest and sexual abuse. According to the World Health Organisation, an estimated 5,000 honour killings are committed worldwide every year, and this is not an exhaustive list of all the forms of femicide.

While some of these practices seem far removed from many of our lives in the UK, the reality is right on our doorstep. Gender-based violence affects women from all countries, backgrounds and social statuses. Despite fantastic efforts from charities and governments, these issues still persist at an alarming rate today. According to the Office for National Statistics, in England and Wales alone, 99 women were killed in a domestic homicide last year, a worrying increase of 14% from the previous year. Across the world, an average of 137 women are killed every day by a member of their family, as 2018 data released by the United Nations Office on Drugs and Crime tells us. So why aren’t we all talking about it?

A possible answer to the question could be that societal norms encourage us to turn a blind eye to domestic abuse. Until very recently, what happened behind closed doors was considered a private matter, and we have struggled to change our deeply rooted attitudes. A poll taken by BBC News in 2003 asked members of the public whether they agreed or disagreed with the following statement: “The police should always be called to incidents of domestic violence”. Only 29% of all participants agreed with the statement, implying that domestic violence is often perceived to be no one else’s business. Although a little dated now, this poll proves just how recently opinions like this have prevailed.

It is thought that some communities might also hide or ignore violence that is motivated by ‘honour’, due to the belief that it is an acceptable cultural practice. There are an estimated 12–15 honour killings every year in the UK, according to the charity Halo Project. But the actual number is likely to be higher, given underreporting. While the UK is showing improvements, the remnants of this laissez-faire attitude towards domestic violence endure. Discussing femicide for what it is – a form of control and aggression towards women that is deeply ingrained into us by the patriarchy – shines a bright light on an issue that many would rather stay in the dark.

When it comes to gender-based violence, knowledge is power, and if we can teach the next generation awareness of femicide then we will equip them with the tools to defeat it

A long history of violence against women helps to explain its pervasiveness to this day. Domestic violence was acceptable as “discipline” as late as 1878 in the UK, and marital rape only became a crime in 1991; previously the assumption was that consent was provided for any sexual activity in the marriage by virtue of that agreement. This shows that, in the grand scheme of things, it has only become legally unacceptable to be violent towards women very, very recently. This undoubtedly influences the attitudes of people today. In many societies, femicide is almost universally acceptable under the ‘right’ circumstances – this results in many criminal justice systems writing off the killing of women as ‘cultural traditions’, perpetuating the idea that gender-based violence is appropriate, and even inevitable.

Finally, we don’t talk about femicide because we just don’t know about it. While we may hear of individual cases from the news, the actual scale of the problem is less talked about. We also don’t learn about it at school or university, unless we hunt down the information ourselves or are just very lucky to be taught by someone who is already informed. In a YouGov and Refuge survey, 9 out of 10 young women surveyed said that they had not learned about domestic violence in school. There is a clear step forward: including this issue in the national curriculum. When it comes to gender-based violence, knowledge is certainly power, and if we can teach the next generation awareness of femicide then we will equip them with the tools to defeat it.

These problems both stem from and result in a lack of awareness and understanding, and taboo around the word femicide. Perhaps we could improve awareness of the killing of women if it were used more in our language. However, the word has only recently been recognised and used in legislation. In 16 out of the 20 countries of Latin America, femicide has been categorised as a separate kind of killing. While it is certainly a response to a problem that is famously rife in the region, it paves the way to a world in which the terminology is normalised and known. It is shocking to compare this with member states of the EU. According to the European Institute for Gender Equality, not a single EU member state includes a definition of femicide in their legislation. This is in spite of the fact that each of these countries, including the UK, have seen the horrors of honour killings first-hand. The problem with lumping together the killing of women under homicide is that it ignores the gendered nature of the issue. If we ignore the causes of it, the consequences are obvious: femicide will continue. Without a clear legal distinction of the killing of women, how can we hope to combat it?

The killing of women is happening right now. It’s happening as you read this. Domestic violence can affect anyone, yet the word femicide is not universally known. A covert example of this is that even typing ‘femicide’ into a document or text is automatically highlighted as a mistake, as if it were gibberish. The more we use the word, and the more normal it becomes, the more we can raise awareness of it and shake society by the shoulders. With this awareness comes a greater ability to combat it and potentially save women’s lives. But these changes must come soon. We simply cannot afford to sweep femicide under the carpet any longer.

Image used with permission from Microsoft.

This shows the word “femicide” written on a Microsoft Word document in lower case and in Times New Roman font, with a red wavy underline indicating that the word is not recognised by the word processor.