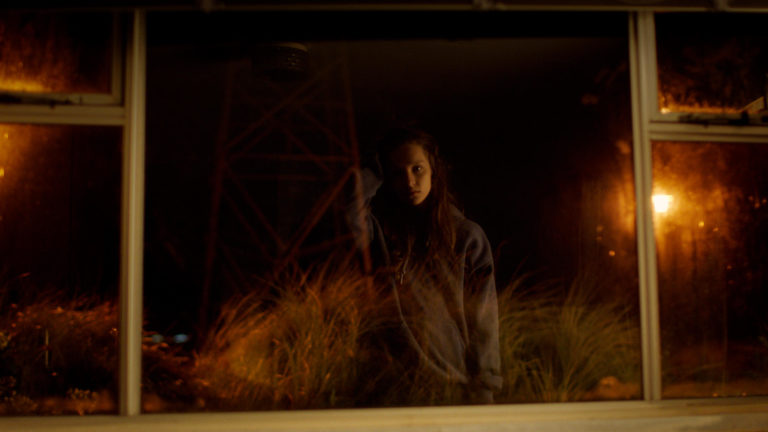 Make Up: sexuality, monsters and caravans

The debut feature by British writer-director Claire Oakley, Make Up, is an intensely visceral and original LGBT coming-of-age thriller. Oakley approaches the fears, fantasies and desires of a tomboyish, shy teenage girl called Ruth (Molly Windsor) with such prowess and confidence that the film holds you firmly in its nail-digging grasp. Every scene, every colour-scheme, every sound is under Oakley’s control and mastery in this immersive, sensory journey into self-discovery.

Transforming a banal Cornish caravan park into a dark and erotic maze of the subconscious, each turn of the tale is charged with uncertainty, menace and pleasure. The idea started as a dream Oakley had of a red-haired woman with her back turned to her. In Make Up this image haunts, petrifies and enthrals young Ruth, who is horrified and magnetised by the apparition. Arriving at the rain-soaked caravan site to be with her boyfriend Tom (Joseph Quinn), Ruth’s steady and joyful relationship is quickly unsettled when unnerving jealousies and new attractions start to take over. It’s after meeting Jade (Stefanie Martini), an older, more self-assured, sensual and feminine woman, that Ruth discovers a whole new side of her sexual identity and consequent sexual anxiety.

Using tropes of psychological thrillers and the sound-driven sensory focus of Peter Strickland’s films such as In Fabric and Berberian Sound Studio, Oakley emerges from the cinematic canon as a director with her own distinctive style in a powerful semi-autobiographical analysis of same-sex attraction. While the British film industry is undoubtedly drawn to drama films (which made up over 30% of last year’s UK productions), Oakley’s choice to focus on horror for her debut feature means she leaves her own bold and original imprint on the UK’s established cinematic landscape. Toying with imagery from the genre of horror but rooting it firmly in the familiar, Oakley plays with the viewer who is always trying to decipher whether the images are real or imagined.  In one scene, Ruth, who has never swum in the ocean before, gains more confidence to face the waves but becomes entangled in a sea of red hair. Though on reflection the moment is clearly symbolic, Oakley’s power as a director is her ability to make sequences like these feel gritty, real and believable. Ruth’s entanglement in red hair when she is swimming is a powerful queer metaphor for her sense of entrapment by this strangling new sexual identity which she doesn’t yet understand. Hair and nails, two seemingly trivial attributes of femininity, are turned into a weighty queer aesthetic that exude the uncanny, violence and sexual gratification.


Queerness dresses up as a red-haired monster always on the cusp of engulfing Ruth; it invokes uncertainty, and is a powerful, almost supernatural force which unsettles her sense of identity. It is only when Ruth stares it in the face that she realises this spectre is actually beautiful and right

With an eerie soundtrack composed by Ben Salisbury (Ex Machina, Free Fire) and song choices from Chromatics to Jon Hopkins, Make Up is an immersive journey into the pain and pleasure of developing sexuality. When Ruth has to search one of the deep-cleaned, plastic-wrapped caravans for a runaway older resident, she enters into a fetishistic nightmare where every latex squeak is a petrifying moment in her uncertain route towards sexual awakening. In another scene of nail-biting tension Ruth is shown taking a shower in one of the public toilets. Ruth moves towards another cubicle where she can hear an ominous moaning sound; she lowers herself to the floor and looks upwards into the next cubicle to see two women making love. Ruth is terrified and transfixed, and we as the viewer are on the edge of our seat in case she is caught.

Make Up is available to stream on Curzon Home Cinema

Images courtesy of BFI.
Image description:
1. Ruth’s reflection in a glass window stares right at the camera. A streetlight on the left spreads a red hue over everything, making the grass look like flames engulfing Ruth.
2. Ruth moves through a plastic-wrapped corridor. She looks to her left and appears to be intimidated and on edge.