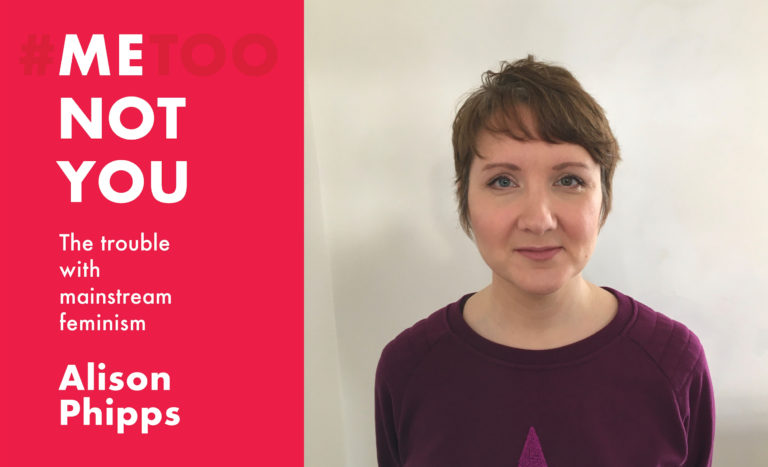 Mainstream feminism has a problem

Mainstream feminist movements have long been critiqued for being exclusionary. Black feminist theory (see, for example: Angela Y. Davis’ Women, Race and Class (1983), Patricia Hill Collins’ Black Feminist Thought (1990) and the anthology All the Women are White, All the Blacks are Men, But Some of Us Are Brave (1982)) has often highlighted the way in which mainstream feminism has centred the white, wealthy, non-disabled woman, excluding women who experience oppression on the basis of race, class, sexuality and disability, as well as gender. Mainstream feminism has also been critiqued for excluding perspectives outside of western Europe and the US and for assuming that all women share common experiences of oppression across the world. In her recent book Me, Not You: The Trouble with Mainstream Feminism (2020), Alison Phipps, a professor of gender studies at the University of Sussex, makes the argument that this Eurocentric feminism has, through its one-dimensional focus on gender, always been defined by exclusion.

The book is informed by Black feminist thought, which sets out important frameworks through which to theorise and practice inclusive feminism. Phipps refers to intersectionality, a theoretical framework developed by Black feminist and lawyer Kimberlé Crenshaw, that helps us to understand oppressions and privileges. Phipps focuses on race, class and gender to critique heterosexual patriarchy (heteropatriarchy), capitalism and colonialism. The exclusionary nature of mainstream feminism is the fundamental issue that the author addresses in Me, Not You, with reference to recent feminist movements. The book’s title is a play on #MeToo, which Phipps critiques in depth.

Phipps addresses Me, Not You to fellow white women, stating that Black feminists need not read it as, for them, the arguments will be nothing new. White women are invited to think about instances in which they have failed to be inclusive, where they have continued to centre themselves, or where they have sought power for themselves, as Phipps accepts that she has certainly done at times.

our gender does not absolve us of our complicity in oppressing others; being a victim and being a perpetrator are not mutually exclusive

Me, Not You is an important critique of white feminism. White feminism is not an identity; it does not refer to all feminists who are white. Rather, it refers to the embedding of certain values and behaviours (such as the centring of oneself in discussion and seeking power) – which Phipps calls “political whiteness” – into feminism. The book expands on how white feminism subscribes to capitalism, seeking power within it, rather than questioning capitalism itself as a form of structural oppression and understanding the relevance of race and class in relation to gender. As Phipps argues, our gender does not absolve us of our complicity in oppressing others; being a victim and being a perpetrator are not mutually exclusive. This message is key at a time when trans- and sex worker-exclusionary rhetoric remains commonplace in mainstream feminism.

Phipps highlights the exclusionary nature of the #MeToo and Times Up movements. She emphasises that these movements were significant in reshaping mainstream understandings of sexual violence, by highlighting its frequency. However, while not intending to diminish these experiences, Phipps argues that feminists must acknowledge how they were politicised. Comparing the differing public reactions to Christine Blasey Ford and Anita Hill coming forward with their experiences of sexual assault, Phipps identifies misogynoir, the particular sexism and anti-Black racism that Black women face, as having impacted the level of support for Anita Hill. Due in part to the stereotypical sexualisation that Black women often face, which harks back to colonialism, the responses to their disclosure of experiences of sexual violence often vastly differ to those of white women.

Phipps also highlights how the focus on ‘bad’ men as the perpetrators of violence against women fails to acknowledge that sexual violence does not only exist in straight relationships. Ultimately, the voices which were most amplified during #MeToo – those of privileged white women speaking out and privileged white men defending themselves – meant that the movement became a conversation centered mainly around heterosexual white people. Although the actor Alyssa Milano was initially seen as the originator of #MeToo, the term was coined by Black feminist Tarana Burke in 2006, well before it went viral on Twitter. Burke has since received the recognition she deserves. However, Phipps argues that the inclusion of women of colour is merely an affectation and #MeToo is reflective of a mainstream feminism which is fronted by white and privileged women.

This book encourages readers to look at sexual violence through an intersectional lens, understanding it as a product of our system of heteropatriarchy, capitalism and colonialism. Following this line of thinking,  feminists are encouraged by Phipps to be critical of the way they respond to sexual violence. Phipps makes a good analogy between Arya Stark’s “kill list” in Game of Thrones and the group of people who faced accusations in connection with the #MeToo movement – largely men who people hoped to see incarcerated. Phipps links this “revenge fantasy” to carceral feminism, which posits criminalisation as the way to achieve gender justice, ignoring how people of colour and the working class tend to be targeted by punitive systems. Sexual violence is viewed in the narrow lens of the ‘kill list’: the fault of ‘bad men’ who need to be punished. Mainstream feminism celebrates as men such as Harvey Weinstein are imprisoned, when what is needed, this book tells us, is mobilisation against the state if gender justice is to be achieved.

Carceral feminism, which views the criminal justice system and incarceration as mechanisms to protect women from ‘bad men’, can also be linked to anti-sex-work and trans-exclusionary feminism. Sex worker-exclusionary feminism focuses on ‘saving’ sex workers from what is seen as the inevitable exploitation inherent in the trade. Phipps highlights how feminists opposed to the sex industry speak on behalf of women by manipulating ‘survivor’ stories and ignoring the heterogeneity of sex workers’ lived experiences. The focus of sex worker-exclusionary feminism is on sex traffickers, or the ‘bad men’ who exploit women. As a result, the Nordic Model, which criminalises buyers rather than sellers of sex, has gained a lot of support, despite concerns that this model still harms sex workers. Criminal punishment is viewed as the only means of keeping sex workers safe from exploitation. Yet, as Phipps argues, this ignores the numerous reasons why people go into sex work, including financial drivers that are exacerbated by austerity regimes.

Phipps likens the protective pretext of sex worker-exclusionary feminism to the rationale behind trans-exclusionary feminism, which paints trans women as a ‘threat’ to cisgender women. Phipps talks about the idea in mainstream feminism of the penis as a weapon, which roots sexual violence in biology rather than as relating to complex power structures. In arguing that feminists must view sexual violence on broader level, Me, Not You makes clear that if the exclusionary basis of mainstream white feminism is to be avoided, feminism must be inclusive of women of colour, working-class women, sex workers and trans women in order to work towards gender justice in a way which does not rely on criminal punishment.

The book explores two key issues that result in mainstream feminism being exclusionary. The first is viewing gender as the key mode of oppression, isolated from other intersecting characteristics. The second is the perception of women’s oppression as being caused by men, theorised as a hierarchical, binary opposition with a biological basis. Reducing women’s oppression to biology ignores structural oppression and the complexities of how all people are harmed by patriarchal values, racialised gender stereotypes and divergent discriminations that vary across the world. The second issue, viewing men as oppressors and the penis as a weapon, ignores the heterogeneous experiences of men and reduces ‘male behaviour’ to a function of biology. In Feminist Theory: From Margin to Center (1984), Feminism is for Everybody: Passionate Politics (2000) and We Real Cool: Black Men and Masculinity (2004), bell hooks presents the inclusion of men as having the potential to strengthen the feminist movement, teaching everyone to resist sexist socialisation and practice political solidarity. While some may feel uneasy at the thought of men having a place within feminism, this kind of association is key if we are to address issues such as sexual violence.

It is important to emphasise that Black feminism did not arise merely as a critique of the kind of ‘mainstream’ feminism Phipps describes but has always existed alongside it, or arguably before it, as radical thinking that centres the experiences of all women in working towards a better future. Feminists who are white must adopt this understanding of solidarity, not arising out of biology or common experience, but from a common goal towards a future that is not structured by racism, patriarchy and capitalism. Phipps asks what a world without sexual violence might look like, what a world without binary gender, a world without capitalism, might look like.

This broader view, looking towards transformative justice rather than mere equality, with universal income, affordable housing, free childcare and healthcare, is not new to Black feminists but takes up little space within the mainstream feminist dialogue. In thinking about this, I was reminded of the Combahee River Collective Statement of 1974. The Combahee River Collective was a Black queer feminist group active from 1974 to 1980, which organised against the multiple systems of oppression that Black women faced. In their declaration, the Combahee River Collective stated, “the liberation of all oppressed peoples necessitates the destruction of the political-economic systems of capitalism and imperialism as well as patriarchy.” Similarly, in the introduction to her recent book Feminism, Interrupted (2020), Lola Olufemi asks us to imagine:

a world where the quality of your life is not determined by how much money you have. You do not have to sell your labour to survive. […] We are liberated from the gender binary’s strangling grip and the demands it places upon our bodies. Sex work does not exist because work does not exist.

Olufemi addresses borders and detention centres, community care and mental health support, communal childrearing, transformative justice, education, transport and the redistribution of resources. In comparison, the typical goals of mainstream feminism that Alison Phipps explores, in particular the focus on criminalisation, the gatekeeping of women-only spaces and the promotion of women within capitalist structures, pale in comparison to the Black feminist visions of a transformed society that is beneficial to everyone.

The conclusion of Me, Not You gives white women a task: to examine how mainstream feminism has reinforced the status quo. It sets out the need to adopt an expansive and inclusive form of feminism and to let the aspiration and transformative visions put forth by Black feminists guide our politics. Inspired by Sara Ahmed’s toolkit at the end of her book Living A Feminist Life (2017), Phipps creates a toolkit for fellow feminists who are white. This is a guide on how feminists can critically analyse mainstream white feminism and become aware of the intersecting dynamics mentioned throughout the book. Phipps makes clear that what is needed is a movement that focuses on restructuring society. While Phipps admits that this will not happen in our lifetime, it means feminists must use this vision to guide their current politics. Me, Not You is essential reading for white women everywhere.

Me, Not You was published by Manchester University Press and is available in hardback, paperback and ebook format. More details here.

The left picture shows the cover of Me, Not You, which is bright pink with white text. The right picture shows the author, Alison Phipps, standing in front of a plain white background. She has light brown hair which is cropped around her ears, and she is wearing a dark purple crew-neck shirt. Both images are used with permission from Manchester University Press.