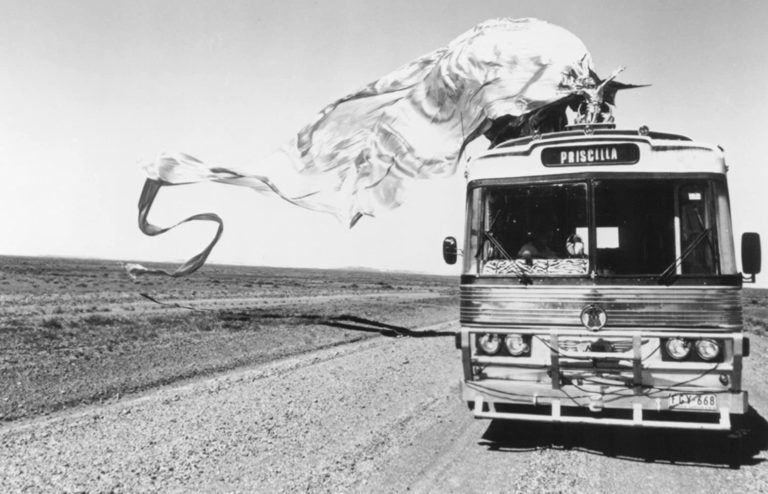 “Oh that was fucking charming, you gutless pack of dickheads.”

This is the opening line of Priscilla, Queen of the Desert. The setting is a Sydney cabaret bar, where one of our main characters, the drag queen Mitzi del Bra (Hugo Weaving), has just finished lip syncing to a beautiful ballad. While the last notes of the song still linger, a patron throws a bottle at her, causing her colleague, fellow performer Felicia Jollygoodfellow (the inimitable Guy Pearce), to unleash the above tirade. It’s an unusual sequence to start with, but it does its job of setting the tone for the film perfectly; this is a story of glamour, violence and performance, where the deep love that characters feel for each other is mostly expressed through a mixture of put-downs and swearing – sometimes aimed at outside aggressors, and sometimes aimed at each other.

While few will regard Priscilla as a family film, to me this desert-based road trip story holds one of the fondest memories of sitting around the television with my parents. I first watched it with them when I was maybe 10-years-old, and I was captivated by the glitter, the bright and colourful costumes, the songs and the dance routines. It was one of the first memories I have of my parents talking to me about film as something that does not just occur on-screen, but has an impact outside of its runtime as well. They explained that the costumes were all very cheaply made because of the low budget, that some of the surprised faces staring at the drag queens were real people reacting to the actors and that tourism in Alice Springs skyrocketed because of the release of the film. It was also one of my first introductions to the LGBT+ community. I had met individual LGBT+ people before, and obviously many shows and films started to have their own background gay characters (hello, early-2000s gay best friend trope!), but it is one of the first films I can remember where you meet a large number of different LGBT+ characters interacting with each other as people, rather than as stock characters. While the film definitely makes use of LGBT+ stereotypes, the characters in it are seen to actively employ these stereotypes, play with them and laugh at them; indeed, diegetic humour is a hugely important feature of the film. We see characters explore serious topics, like death, trauma, violence and familial responsibility, but they often respond to it with a quip of some sorts. It is frequently the characters themselves who laugh at misfortune, rather than just the audience. In this way, we are invited to share in a character’s emotions, rather than just see them on display as a spectacle to be trivialised.

Similarly, there are moments when the fun stops. While the main characters are always framed as getting the moral and physical victory over the homophobic and transphobic characters, there are stark reminders that witty comebacks are only good for a quick laugh, not for a shift in cultural values. These moments are treated with astonished silence amid the fast-paced dialogue, grave tones in the score and wide shots that emphasise the smallness of the character in their overwhelming environments: space is made for the audience to grieve this injustice along with the characters.

In a film that is all about outsiders, it is disappointing to see that some ‘outsiders’ are seen as more worthy of complexity than others. We need to aim for a kind of filmmaking where we don’t have to explore the complexity of one marginalised group through the simplification of another

There are features of the film that feel more meta-textually jarring, partially because of our more accurate understanding of marginalised groups nowadays; the continuous misgendering and dead-naming of trans woman Bernadette (played by Terence Stamp) is shown to genuinely upset her, but because it comes from Felicia, who’s an otherwise positively framed character throughout, it is unclear who the audience is meant to side with. This is only amplified by the fact that Bernadette is played by a cisgender man, making it clear that on the production level trans women are, at least to an extent, equated with cis men. While Hollywood still has a tendency to cast cis actors as trans characters, nowadays there are at least mainstream debates as to why this is harmful and hopefully such a practice could not go unquestioned if the film were made today.

The treatment of non-white characters, however, is more difficult to play off as a product of its time. The character of Filipina bride Cynthia is a garish stereotype by any stretch of the imagination; she speaks in an exaggerated accent, she is characterised as a gold digger and her strip act is treated as an embarrassment to her husband Bob. However, what makes this character so especially harmful, is that we do not get to see her complexity: unlike Bernadette, Mitzi and Felicia, there is no emotion, vulnerability or genuine character development under this stereotypical veneer.

Similarly, in an artistic decision that’s sadly ironical, a film that is highly involved with Australia treats its Aboriginal characters quite badly. The desert, the towns, the mountains and the wildlife are all emphasised to set the tone for the film as a road movie. Yet the Aboriginal characters are treated as just an extension of this environment, rather than as individual people who have their own personalities to be explored. Only one out of all the Aboriginal characters we meet is named – the rest don’t even have any lines. These characters seem to only exist to add a cultural backdrop to the main character’s routine and to help them from one plot point to another, but they are not given the internal complexity that the main characters have.

In a film that is all about outsiders, it is disappointing to see that some ‘outsiders’ are seen as more worthy of complexity than others. While the emotional depth of the main characters and their position within a clear LGBT+ community still make them relatable over two and a half decades later, we need to aim for a kind of filmmaking where we don’t have to explore the complexity of one marginalised group through the simplification of another. In the words used to describe the titular bus Priscilla, the film is “nice in a hideous sort of way”.

Some of this ugliness definitely feels like the rawness of reality, making the film more relatable and giving a sense of timelessness in regards to the flaws within our communities. However, other parts of it are not that deep – just surface-level ugliness.

Images courtesy of IMDb and Metro Goldwyn.
Image description:
1. A black and white photo of the film’s titular bus Priscilla. The vintage-looking bus travels through a desert road while a figure stands on top of it. Their dress has a long shiny trail that’s flying in the wind.
2. The three main characters stand on top of a mountain with their back to camera. They wear colourful drag outfits that stand out against the plain landscape.