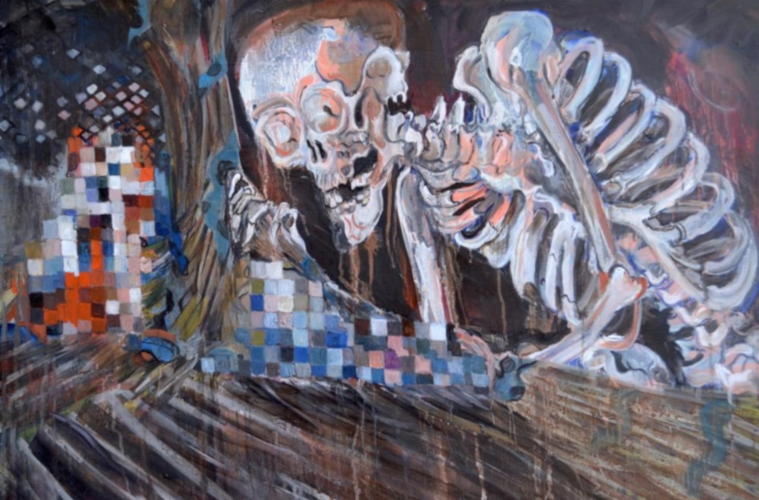 Summoning the spectre of sexual violence in war

CN: This article contains discussion of war, violence, sexual assault, and suicide. There are no explicit images. An unsettling and profound exploration of sexual violence in war, The Vanishing Act is Jaye Ho’s first solo exhibition at Brighton-based charity ONCA. Although she’s been working with them to put the show together since last May, the Covid-19 crisis has forced them to host her work on the gallery’s website instead of a conventional real-life show. I began by asking her how she’s found this experience and whether there have been any positives to this new way of sharing her art.

“When I found out that I couldn’t have the gallery open I was a bit disappointed,” Jaye admits. Hosting exhibitions online is very tricky to do well, with much of a painting’s visual impact coming from texture and colour that digital screens can’t replicate.

In the past Jaye has felt frustrated by the scope of many online tours she has been on, especially in how they direct the viewer’s focus to certain works and don’t provide the freedom that comes from wandering around a physical space. Jaye decided to approach the online exhibition with these lessons in mind, figuring out what she would want as a viewer as well as an artist:

This is the first time ONCA’s done this online stuff too. They had a show on before mine and I looked at it and it was loads of information – they had slide shows, they had videos. They had things being put up all the time and loads of text and I was very conscious I didn’t want to do that. I wanted it to be stripped down and literally just have a slide show. I wasn’t even going to have the blog at all. I was just thinking, well, if I go to a show what do I do? I see the pictures first and then if I’m interested I might read about it, so I was trying to replicate that.

The greatest advantage to the online exhibition has been the ability to share her work with her family in Malaysia, something especially poignant for this particular show. Born in Oxford to a Singaporean father and a Malaysian mother, for years Jaye’s relationship with her heritage was defined by spiteful microaggressions and an institutionally racist school, plus a healthy (and somewhat typical) dose of teenage embarrassment about her parents:

Now I realise that I was getting to grips with that relationship, with my mother being born in Malaysia, emigrating to the UK, and then raising a child who has kind of rejected her culture. You know, when you grow up and everyone points a finger and says ‘you’re different’. I almost rejected my parents. It’s only literally just now that I’ve realised that was what the crux of all of my art work in my early twenties was about. After studying Fine Art Media at Central Saint Martins and completing a Master’s degree at the Slade, Jaye moved into the civil service. What seemed to me like a slightly left-field move was in a way born out of her background in art; her dissertation was on the manipulation of images in Stalinist Russia and modern-day Britain. It was her job at the Foreign, Commonwealth and Development Office which brought her attention to the awful and widespread problem of sexual violence during war. She remembered the stories her mother had told her about her sisters dressing as boys to avoid the unwanted attentions of the occupying forces.

Anonymity is therefore both the tool of the powerful and the burden of the powerless
Jaye began to research the so-called ‘Comfort Women’, the sanitizing name given to the Japanese practice of forcing women in occupied territories to work for them as sex slaves. It’s difficult to know how many women were affected by the programme, but even the lowest figures estimate that as many as 20,000 women may have been subject to it in a timespan of just over a decade. Many of the women may have been killed or forced to commit suicide at the end of the war as part of a wider programme to destroy the evidence. Jaye admits:

I didn’t learn about all this rape in school. It’s strange, because maybe murder or people dying on the battlefield is more acceptable than the rape of civilians. I don’t know. I always thought World War 2 was – it was a loss for men. Thousands and thousands of men died. It’s all about the men. But what about the women?

Women captured by the occupying forces in Malaysia were often made to become ‘Comfort Women’, hence Jaye’s aunts’ practice of dressing as boys. In her portraits of her aunts, Jaye explores this act of concealment by obscuring their faces with geometric shapes, coloured with shades inspired by Peranakan culture.

Jaye uses this method of pixelation in her portraits of both victims and perpetrators of violence, raising a striking comment on the paradox of anonymity. Military leaders may be captured and prosecuted, but the thousands of men who participated and the thousands of women who endured it remain nameless and faceless. Anonymity is therefore both the tool of the powerful and the burden of the powerless. This is alluded to in the title of the exhibition; the ‘vanishing act’ pulled by perpetrators and the drifting away into forgotten history of those who suffered at their hands.

This powerful anonymity and the lack of tangible evidence are often drawn on by those who continue to deny that these acts of violence ever happened, something which is obviously upsetting for Jaye’s mother. Now in her eighties and with her sisters long gone, it is only through the courageous testimony of women of her generation that this sordid history can be recorded and exposed. Although the subject matter at hand is undoubtedly grim, Jaye is grateful for how it’s given her a better understanding of her parents and a renewed connection with her mother. This lack of procedure isn’t limited to just journalism. Up until quite recently, Jaye explains, “there was no kind of legal definition of what an act of sexual crime in a war was. There’s no guidance at all, so it’s actually still a really mute area. People don’t know loads about this.” This was the motivation behind the Call It What It Is campaign, a programme run by the Women’s Initiatives for Gender Justice in The Hague that further increased Jaye’s awareness of the complex issue.

The efficacy of formal prosecution is also something Jaye struggles with, explored in a series of portraits of military leaders standing trial in criminal courts. In these paintings anonymity is turned against the subjects, their faces obscured or scratched away in a manner inspired by the purges of Stalinist Russia which Jaye explored in her Master’s degree. She was struck in part by how detached from the actual crimes these prosecutions were, both in time and space:

Politics gets in the way all the time. I felt quite frustrated that, even though in the end justice will be delivered, we hope, it takes years and years and years. It happens miles away. The Hague is miles away from the atrocities and [the Democratic Republic of the Congo] and I was thinking can you imagine if something happened to you, you were in DRC, and then justice is done [so remotely].

There were some quite hard-hitting and serious subjects that I was reading about and it was quite depressing, so making art helped with that process. I always find my painting quite therapeutic. I really enjoy it, even if the subject matter is quite dark.

There’s also a strong element of reclamation in Jaye’s work, especially in the dignity she gives her female subjects. Where the subject of sexual violence in conflict has either been ignored or framed by men for decades, there is great power to be had in approaching the topic through art and the female perspective. This is particularly exemplified in Jaye’s favourite piece in the exhibition, here above as the feature image, a reference to the famous skeleton spectre portrayed by Utagawa Kuniyoshi: In the original woodblock print there’s a princess who’s a witch, and she has summoned a skeleton spectre to help with this fight. Below there are two Samurais fighting, but in my painting the witch is Kim Hak-Sun, the first South Korean Comfort Woman to speak up about what happened to her, and the fighting Samurai represent the Japanese Government. The skeleton spectre is all of the Comfort Women who didn’t have the courage or have passed away.

Jaye’s work demonstrates how potent art can be as a tool of exploring the less palatable aspects of our history
With the exhibition coinciding with Remembrance Sunday in the UK, it seems particularly important to take a moment to reflect on the devastation conflict causes on the lives of women, children and civilians across the world. Jaye’s work attempts to give a voice to these issues, but she’s also acutely aware that she lives a life of relative peace compared to her subjects, especially when compared to her aunts’. This is why she includes a self-portrait in the exhibition of herself at Reading festival, smiling and carefree. Jaye explains:

I was very conscious of people maybe thinking that I’d experienced those things. Obviously not, because I wasn’t born during World War 2, but it’s also kind of that acknowledgement that my childhood was completely different and actually, almost a sense of, I don’t know, embarrassment for how petulant I was as a teenager. How the hell could I possibly complain when my aunts had gone through what they went through?

Although I think this self-criticism is too harsh, it is extremely refreshing to see an artist discuss the issue of privilege so intelligently and compassionately. This awareness makes Jaye’s paintings powerful without being fetishising, affecting without being exploitative. Jaye’s work demonstrates how potent art can be as a tool of exploring the less palatable aspects of our history, a skill which in 2020 seems more relevant than ever.

All images used with kind permission of the artist. The cover photo is of the painting ‘Kim Hak-Sun the survivor and the skeleton spectre’. A skeleton looms over most of the work, one hand grabbing the base of a tree; two pixelated areas are below it, one with hints of red and one mainly blue.