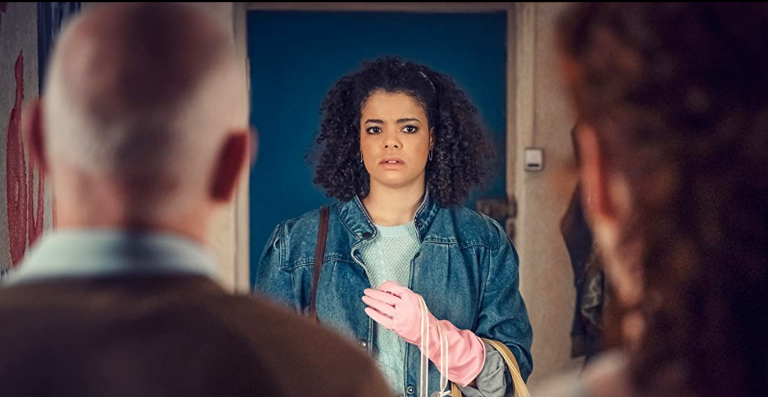 Jill and the female carer

Before I start this piece properly, I want to say that I very much enjoyed It’s a Sin. I loved the outfits, the soundtrack, the acting, the pace of the dialogue. I think that, as viewers, we have been lucky to have been introduced to some amazing new actors and I hope that we will get to see them in many more things to come. It is an extremely well-crafted series. And it is because I loved the series so much, that I can’t seem to let one of its lesser aspects go: the characterisation of Jill.

Jill is one of the main characters of It’s a Sin, beautifully played by Lydia West. In many ways, she is an ode to the caregivers of the AIDS epidemic – those who were affected by the virus, not because it ravaged their bodies, but because it required people to care for their friends round the clock; it required dealing with blame when people deteriorated despite one’s best efforts; it required strength to go to one funeral after another. It is important that these stories are told. Feminism has long fought for the acknowledgement of care work as vital to any society. However, in the character of Jill, we don’t so much get a recognition of care work as an idealisation of it. Jill is always ready, willing and able to help out, even volunteering to clean up after the boys in her house. She never loses her temper and she never asks for anything in return. She barely even gets thanked for all of the work she does. All other characters are allowed to be flawed and selfish, but not Jill.

Of course, there wouldn’t be very much for Jill to be selfish about – after all, she doesn’t have a life outside her caring role. We see her act in a West End show that looks suspiciously like Les Mis, but her caring duties never conflict with her career, or even just with other plans that she’s made. She doesn’t have a partner who might demand more of her time. We never even learn what Jill’s orientation is. In a series that’s so filled to the brim with sex scenes, we never see any female pleasure, from Jill or otherwise. Jill is an entirely conflict-less character, because she has no life to conflict with her main role of caring for her male friends.

The idea that Black women are “naturally” more caring, and that everybody else is entitled to the time, energy and efforts of Black women without having to do anything back, runs as deep in media representation as it does in real life

And Jill is not the only female character whose life seems to revolve around men alone – most female characters are either nurses or mothers, and they are either wholly self-sacrificial or absolute monsters. The only exceptions are lawyer Lizbeth Farooqi (Seyan Sarvan) and agent Carol Carter (Tracy Ann Oberman), who show up just in time to help the main characters out of a bad situation and then immediately leave again.

It would have been nice to see Jill be selfish or unreasonable because it would have complicated her character so much more. One of the most interesting aspects of Ritchie’s (Olly Alexander) character is that he does something that is undeniably bad (aside from supporting a government that is actively persecuting his community); he continues sleeping with men after suspecting that he is HIV positive. He knowingly infects others, at a time when this meant a death sentence. This is undoubtedly a horrible thing to do, but as an audience we understand why he does it. We know that he is scared and he is in denial, and he doesn’t want to die. And we can accept the rest of Ritchie’s story because of the fullness of his character.

However, the one recurring female character who does horrible things gets brutally blamed for it. When Ritchie’s mother (Keeley Hawes) meets Jill to tell her that Ritchie has died, Jill gives an enraged speech about how Ritchie’s mother is responsible, not just for Ritchie’s death, but for the deaths of everybody he infected, because it was Ritchie’s mother who instilled the shame in him that caused him to ignore his disease. While this is absolutely true, and a valuable point to make about how infectious shame is, we do also have to remember that Ritchie has a  father (played by Shaun Dooley), who seemingly gets none of the blame. It is difficult not to see this scene as the series telling us that Jill is the virtuous mother that Ritchie needed when his biological mother was insufficient. And like any mother role on television, Jill doesn’t exist outside of it; when Ritchie’s story ends, so does Jill’s. We don’t see any of her life after Ritchie’s death, because why would we care enough about a Black female character to have an episode that fully revolves around her life? Based only on It’s a Sin, you would think that the epidemic didn’t affect sex workers, drug users, trans people, people of colour or even anyone who isn’t conventionally attractive

This wouldn’t be so bad if the series hadn’t been treated (often even before its release) as the epitome of UK AIDS depictions. Based only on It’s a Sin, you would think that the epidemic didn’t affect sex workers, drug users, trans people, people of colour or even anyone who isn’t conventionally attractive. This is not just a problem of the show, this is the problem of a society that only wants to hear stories told by certain voices, about certain bodies. If It’s a Sin had a main character of colour or a sex worker among the group of friends, perhaps many of the people that are enjoying the series now would not have bothered to watch it in the first place. Why can’t LGBT+ communities muster up the same energy for films and series starring women, people of colour or people who are both?

I wouldn’t be able to finish this piece without acknowledging at some point that Jill is not just a carer figure – she is a mixed-race, Black carer figure. The idea that Black women are “naturally” more caring, and that everybody else is entitled to the time, energy and efforts of Black women without having to do anything back, runs as deep in media representation as it does in real life.

This is not a wholesale criticism of the series. As I said, I think it’s very well-made, and the vast majority of the praise for it is entirely justified. But I would like us to re-conceptualise how we look at care work; who is generally deemed entitled to this work, and who we expect to do this work? If we truly want to value the carers in our lives, we have to admit that care work is messy, it is exhausting, it is difficult, and we have to recognise that caregivers have lives and emotions independent of those they care for.

It’s a Sin is available to watch on All4.

Images courtesy of IMDb.
Image description:
1. Jill stands against a blue door, framed by the back of two heads. She wears a pink rubber glove and appears to be somewhat surprised or confused by the situation.
2. Jill puts on rubber gloves in a dirty kitchen.
3. The cast of It’s a Sin as it appears on the show’s poster. The five main characters (left to right: Roscoe, Ash, Ritchie, Colin, Jill) sit on the back of a cab, laughing and hugging each other.