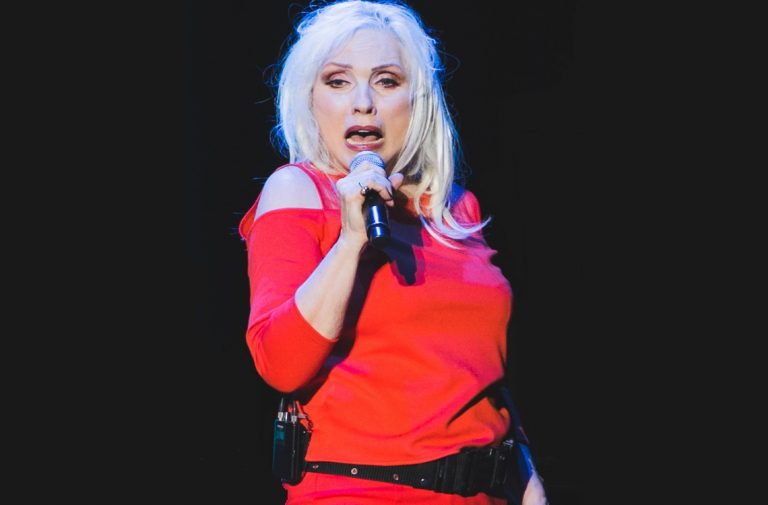 Unashamed and untouchable: how Deborah Harry helped me become a music journalist

I was about 12 years old, watching Danny Boyle’s Trainspotting for the first time. I was viewing the infamous club scene where Mark Renton has taken ecstasy and is prowling around the club drenched in his own sweat: revolting but still kinda fit? It then cuts to Diane, stood in the corner of the club, smoking a cigarette in that iconic light pink sparkly dress: the dress I still try to find a replica of online sometimes. With all the aesthetics a movie fan could wish for, it was not this that caught the attention of my 12-year-old self.

I heard ‘Atomic’ (covered by Sleeper) starting to play in the background, cutting straight to the repetitious guitar riff that continues throughout the track. I got a strange feeling in my tummy and I knew something about this piece of music was special. Had this just become my new favourite song? As the next few scenes cut between the World Cup video and Diane and Mark’s sexual encounter, I could not take my focus away from the song. The next day I hastily looked up the soundtrack and discovered ‘Atomic’ was originally by a band called Blondie. I found and listened to the original version.

That was the start of my love for the punk icon Deborah Harry.

Emerging in 1970s downtown New York city, alongside some of punk rock’s greatest gifts (such as David Bowie, Iggy Pop and The Ramones), the patriarchy would have made it easy for Harry to fall into the shadows of an industry dominated by masculinity. However, she arguably became punk’s most notorious idol and, for me many years later, she was also a role model.

Harry was punk’s pinup. She still is. Her look was iconic: a style I still admire today. In a world where people were dirty, raw and sweaty, she added a whole new level of longing alongside her boundary-pushing music in a sexist world where the odds were against her. Her strong character shone through her music and her image, making her the desirable musical legend.

Listening to Blondie has given me a sense of freedom that I have never experienced from listening to music created by only men. As Blondie, Harry was playing with the idea of being a very feminine woman in a highly macho game. Her autobiography Face It summarises: “My Blondie character was an inflatable doll but with a dark, provocative, aggressive side. I was playing it up, yet I was very serious.” She stayed true to herself in a traditional ‘boys club’ and that is a difficult quality to maintain.

It was not too long after that Trainspotting moment that I decided I wanted to be a music journalist. Discovering Deborah Harry was a crucial moment in the beginning of my love for music. I started reading NME and learning about emerging artists, taking the opportunity to go to any gig I could. I studied hard and made it to university, where I managed to achieve a 2:1 in popular music journalism. I then turned my attention to women in rock criticism and the lack of gender diversity that still exists in the industry. I titled my dissertation Is Rock Criticism Inherently Sexist? and wrote about how the industry I was dedicating my life to, although improving, was still dominated by dudes.

It could have been disheartening to find people viewing her career choice in a limiting light, but Harry subverted it

I’m now working as a freelance journalist and music PR but I still have people assuming that women music writers (myself included) are ‘groupies’ or ‘wannabe groupies’. I have had people presuming I’ve fucked a tour manager just to get a backstage pass or that after interviewing a band we would ‘fool around’. This is the ‘locker room’ analogy used to summarise the industry of rock criticism in Rock She Wrote by Evelyn McDonnell and Ann Powers: “[In] the backstage area, where, if you are a woman, it’s assumed that you’re a groupie.”

When I started out, it was horrible to think that this was how people viewed my profession. I felt I’d put in all of that hard work just to be judged. Harry suffered such prejudice throughout her career due to her punk pinup status. It could have been disheartening for her to find people viewing her career choice in a limiting light that cast her as just one thing, as opposed to the professional she was. But Harry subverted it. She didn’t let it stop her. Deborah Harry made men nervous. I envy that.

Harry challenged our perspective of women. Her bold movements and embrace of her sexuality made men anxious. She was in control of her image as a woman and, crucially, she was onstage. She embraced the reactions to her looks and used them in her favour, with the name ‘Blondie’ coming from a catcall towards her, “Hey Blondie, how about a blow job?” She challenged the traditional side-lining of pretty women by becoming the ‘pretty’ face of punk. She did not succumb to the ideals of that time. She kept her feminine exterior and embraced it with an open sensuality. She was unashamed to be a woman and she was untouchable.

That’s how I aim to be: unashamed and untouchable.

I admire Blondie’s desire to take control. She was at the forefront of a punk movement and did not sit in the box that was created for her. She wore her hair how she wanted. She wore whatever clothes she wanted. She fucked whoever she pleased. She sang whatever songs she wanted.

Harry has encouraged me to feel how I want to feel and dance how I want to dance. She also gives me confidence that I can achieve anything. When we watch a woman such as Deborah Harry push through what was traditionally thought of as a ‘man’s world’ with dignity, strength and an unapologetic love of sex, we see that women can remain true to themselves and still come out on top. Indeed, Blondie remained true to herself while changing music and culture with her face and a microphone. Harry has taught me how to be confident. She has taught me to stomp my way through life and kick any oppressors out of the way. She has taught me how to take control of my own life and not care what others think.

She is a massive reason why I am the person I am today.

The featured image shows Deborah Harry in a cold shoulder red dress on-stage at The Roundhouse in May 2017. The original version is by Raph_PH and shared under a creative commons licence.

The second image is the cover of one of the Chrysalis label 7” editions [6155 279] of Blondie’s ‘Atomic’. This shows Deborah Harry in a black ‘Andy Warhol’s Bad’ T-shirt.