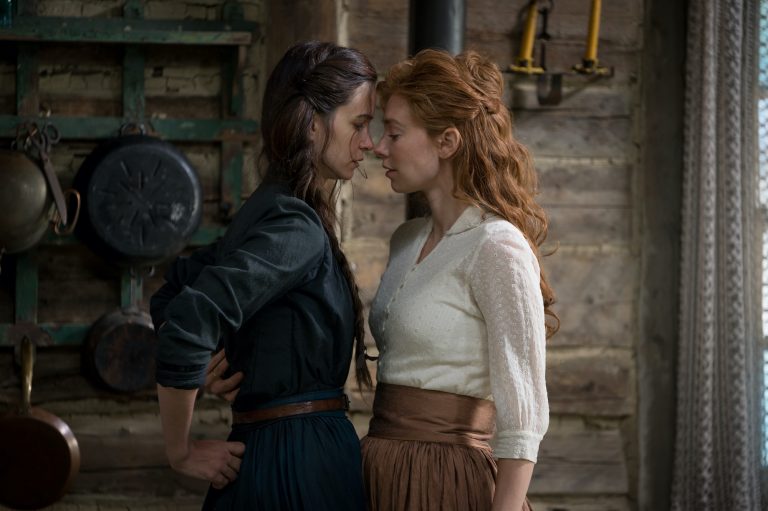 The World to Come: an interview with director Mona Fastvold

There are whispers of a new genre in the cinema landscape: the lesbian period drama.

Despite being only recently satirised by a Saturday Night Live (SNL) sketch, it’s worth noting that giving queer stories a period setting has always been one of the safest ways to bring them to the big screen. Historical often equals prestige, and whether it’s Brokeback Mountain, Carol or Call Me By Your Name, Hollywood producers seem to think romance has an extra kick to it when paired with a bygone era.

But in the past year, made maybe more noticeable by the relatively low number of films being released due to the Covid-19 pandemic, the genre has seen a spike, kicked off by Céline Sciamma’s Portrait of a Lady on Fire and followed by Ammonite and The World to Come. Though it’s worth questioning whether we’d see it this way if these were straight romances, it’s clear the films do have similarities. However, each one carries a distinguishable stylistic signature.

The World to Come, specifically, moves us into the forests of Schoharie County, in the State of New York in 19th century America. Abigail (Katherine Waterson) and Dyer (Casey Affleck) own a cold and isolated farm. After losing their child to diphtheria, Abigail carries on her repetitive daily duties with little enthusiasm. One thing that strikes me immediately about the film is the decision to let us access the main character’s thoughts through voiceover. In contrast to the dire circumstances, Abigail’s mind is constantly wondering, thinking and living. This inner world only gets a chance to come out once she meets Tallie (Vanessa Kirby), the new and equally childless neighbour, with whom she soon develops a passionate but obviously forbidden romance. “Your imagination is your freedom: to think big and dream big. That was the sentiment, the comfort, the escape that I wanted for the ending, though it’s bittersweet” (Mona Fastvold)

When I sit down with The World to Come’s director Mona Fastvold, my first question is an itch I need to scratch.

This is what I thought. Three films don’t exactly uproot the industry. But Fastvold does share words of encouragement:

“There have always been some great people out there who want to tell these kinds of stories. Maybe it will get a little bit easier. Every time a film like this is made it might be a little easier. It’s still very tricky. There’s a lot of talk and not a ton of action and you still have to go to so many meetings and constantly hear the same thing of how we should shoot for a much smaller budget if this is the plot: that’s the bottom line. Because it’s harder to make a movie with two women in the lead, that’s one thing. And then of course it’s easier to claim this is niche because it is only going to cater to the queer community, which is ridiculous. No, it won’t. You have to fight for it as hard as you can. My cast, my creative collaborators and my producers, we all decided ‘We’re going to do it no matter what’.”

And Fastvold’s trust in the project has paid off big. The film won The Queer Lion at the 77th Venice International Film Festival. The film makes the best use of its landscape, with seasons changing the more Abigail and Tallie’s relationship evolves: from cold winter to thick green summer.

I ask Fastvold what was on her mood board when she was approaching the visuals of the film.

“I wanted to give these women a beautiful and sensual love story,” she tells me. “I wanted to evoke films of a bygone era. It’s easy to approach period pieces or queer films with a lot of restraints but I wanted it to be lush and seductive.”

I find myself nodding along, as the restraint and needlessly prolonged silence of many of these movies – and Ammonite is the most recent example – often alienate me from buying into the romance. Queer women should be allowed lightness and fun, and Abigail and Talley’s early scenes make space for that.

As for the inspiration behind the intention, Fastvold says she looked prevalently at paintings and early photography rather than cinematic predecessors. “I looked at Peter Henry Emerson’s photography, I looked at images of farmers, the way they dressed, not buttoned-up and perfect with clean coloured dresses. I wanted to seek out how lived in I can allow them to be both with the customers and the hair. Looking at very constrained period dresses, I wonder: how do they work with all this stuff on them, you know? But if you study female painters of the era, women would often put their hair in a bun, a soft corset and a shawl and sit down and milk the cows. I wanted the texture of the film to feel more like a painting, so we shot on 16mm to have that grain and we filled the light with smoke and dust.”

The film makes some profound points about the burden of care and domestic duties and how this is, obviously, heavily gendered. As tragic as the death of Abigail and Dyer’s daughter is, there are points in the film where we wonder whether she’s better off not having grown up in this environment. But as we see Abigail lulling their sick daughter to sleep, her husband Dyer stands outside the door, incapable of facing this emotional moment. Which is one of the many implicit reflections on gender roles within the film.

“It isn’t the past, it’s my interpretation of the past, but I was really trying to find the diversity in that universe,” Fastvold explains. “Both Abigail and Talley are feminists. They feel they deserve more and they want to have more – and they find difficulties in existing within these constraints. But Dyer and Finney [Tally’s husband, played by Christopher Abbott] also struggle to live within these constraints. Dyer has hopes and dreams that he has not been able to explore and he wants to allow his partner to heal. There’s a healing element in their story that I really like. Just because Abigail is a farmer, it doesn’t mean she can’t have a rich inner life. She has thoughts that are provoking and exciting. I strived to create a portrait of a woman that has done everything she can to seek out knowledge and question the world around her, but because her personality is so reserved it is exciting to be let into this constant stream of consciousness. These particular characters deserved to be explored.”

Dyer turns out to be one of the most surprising aspects of the film, in the sense that although he suspects his wife’s queerness, he seems to be somewhat okay with it. However, Talley’s husband, Finney (Christopher Abbott), is a much more predictable character, whose controlling nature leads him to murder Talley: an ultimately tragic and rageful ending. I’ve talked about this before: queer films deserve happy endings. This makes it hard to justify yet another movie playing into the “bury your gays” trope. In this film’s defence, we do get a sort of fantasy epilogue and a last conversation between Abigail and the ghost of Talley. This means the final image we have of them is one of love and, yes, bittersweetness, but at least we aren’t left with a cold dead body (we do get that earlier, though). While this is more of a screenplay issue than a directorial one, I’m curious to hear Fastvold’s take on the matter:

“You have to acknowledge the hardship. You have to acknowledge that so many men killed off their wives. We have to acknowledge all these women. It’s a tricky one, finding the balance, but that’s the space I’m interested in. It’s a film, it’s a fantasy, so there is an alternate version of that fantasy, if it were in another place or another time, where Abigail and Talley would absolutely be together and having their lunch at the top of the room after working in the farm. In my mind, that reality exists just as much as the one Abigail is left with. That’s what the ghost of Talley tells Abigail too. Your imagination is your freedom: to think big and dream big. That was the sentiment, the comfort, the escape that I wanted for the ending, though it’s bittersweet. You have Dyer accepting that Abigail is who she is and that’s one step forward to be followed by the next generation. We can’t rewrite history but at the same time we have to look into the future.”

As the title of the film suggests, that world to come could, and should, be brighter.

The World to Come is out in UK cinemas on July 23.

Images courtesy of Think Jam.
Image description:
1. Abigail and Talley lean in for a kiss in a barn.
2. A portrait of Mona Fastvold sitting on an armchair. She wears a dark suit and looks off camera. She runs a hand through her hair.
3. Abigail and Talley lay on a picnic blanket in the forest. The leaves on the ground suggest an autumn landscape. They both look off camera.