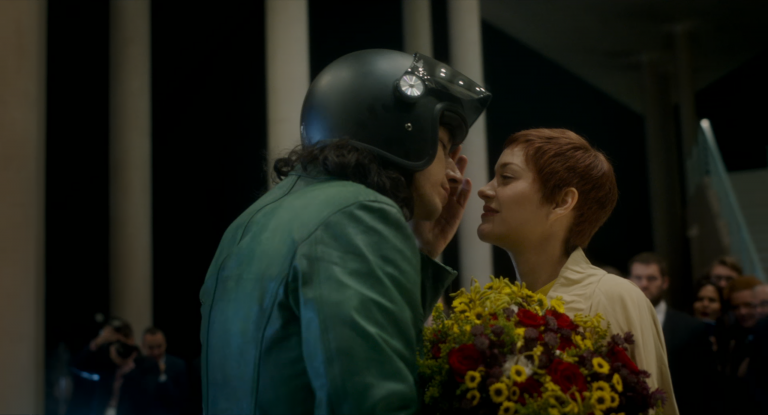 Annette: surrealism does not extend to gender roles

I’ve often been told that the best way to start thinking about a film is to identify which two existing films it is a combination of. For Annette, this is quite frankly near impossible. My best shot is A Star is Born meets The Curse of Chucky. Even then, that doesn’t quite capture the 140-minute rock-opera fever-dream that is Annette.

From the minds of the musical pop duo, Sparks, and French director Leos Carax, Annette kicked off this year’s Cannes Film Festival with a bang.

Henry McHenry (Adam Driver), an equally self-deprecating and self-important comedian, falls in love with Ann (Marion Cotillard), an opera singer who dies every night in her one woman show. Under the spotlight of Entertainment Tonight-esque newsreels, they marry and have a puppet child (yes, let’s just pretend this is normal). Amidst #MeToo scandals (hallucinated or not, we are unsure), controversial comedy performances and Ann’s growing success, Henry’s violent drunken tendencies worsen.

Through explosive musical numbers and sparkling visuals, Carax manages to re-envisage present-day Los Angeles as a mystic otherworld, where bottle-greens and electric blues triumph. The film takes us on a wild ride, with at least 20 minutes of it made up of Adam Driver speeding down pitch-black highways on his motorbike as he sings.

Annette makes it known from the get-go that sound will be the film’s controlling force. As the real-life cast and crew get ready for their opening number, the screen fizzes in and out of blackness in time with the sound of connecting guitar amps or beating drums. My favourite sound moment comes when The Conductor (Simon Helberg) asks us to, “Excuse him a minute” as he pauses between his lines to flail his arms at the climax of his orchestra’s symphony. In a single take, the camera spins around him; the narrative is put on hold; the tension is pushed to its apex and we are forced to admire the magnificence of the music. Although Annette was a treat for the eyes and ears, this was often at the expense of the narrative. I found myself repeatedly on the verge of making sense of something, only to be hurtled into the next scene before I could digest the last. It was exhausting, exhilarating and so consistently bizarre that I began to feel unfazed. However, I suspect this was all part of Carax’s plan. His 2012 drama/fantasy hybrid, Holy Motors, proves that he is no stranger to normalising the surreal. Similarly, Annette destablises the silver platter of reality that we as audience members expect from films.

At its heart, Annette explores the relationship between audience and performer and poses the question: how much do we let white male celebrities get away with because of their icon status? Or more specifically, how many people does a white male celebrity have to kill before we do something about it? (Two is the answer, according to Carax.)

I don’t really know why the crowd goes so wild for Henry McHenry – his jokes are not funny and his green dressing gown made me uneasy. Perhaps this tells us how low the bar is in Hollywood for a white man to be successful. All he has to do is walk on stage in his pyjamas and hurl some abuse at us and we raise the roof. Whereas Ann, Henry’s female counterpart, has to die to impress us.

Henry engages in a back and forth with the audience during his comedy show. He instructs them to laugh, which they do so in a hypnotic union of “ha ha ha”, and then to stop, which they obey immediately. As the audience demands an answer to the question, “Henry, why did you become a comedian?” Carax flips the camera round to them. Later on, in what is Henry’s final performance, audience members react angrily to controversial comments. Henry’s show is cancelled and so is he. So, who is in control: audience or performer? We idolise and worship the stars, yet they are completely at our disposal.

The film spends its first half tightrope-walking along, shaking between the unsettling and the beautiful. This fine line is expressed through one perfect, yet distressing, moment: after Henry and Ann’s sex scene, in a playful lovers’ tussle, he tickles her so hard that we can’t tell if her screams are from besotted laughter or fear and pain.

Midway through, Annette completely commits to the disturbing. Henry’s obsession with audience validation and spectacle marks his descent into alcoholism, exploitation and outright killing. Teasing shots of his hands floating inches away from Ann’s neck finally manifest and we realise Henry’s true self is actually the nasty, abusive and repulsive asshole he has been performing on stage.

Does it frustrate me that yet another film has been made where a man kills his wife and the main goal is still to unpack his psychology, self-destructiveness and journey to becoming a better man? Certainly. Any development of Ann’s character is overshadowed by a common intrinsic need from the filmmakers to explore the damaged and deranged he-murderer.

Reminiscent of 1970s slasher films, Ann brought to mind The Screaming Woman trope, in which female characters are voiceless aside from their high-pitched shrieks. She screams during sex, during labour and during her death (both on stage and when Henry kills her). Does opera singing count as screaming as well? In all her actions, her scream paints her solely as a victim. This was the only aspect of Annette that managed to remain completely and disappointingly predictable.

Filmmakers worldwide, I’m begging you, we don’t need any more films about ‘unhinged men’ who are actually just serial killers. And we certainly don’t need to sing about it.

Annette is out in UK cinemas

Images courtesy of IMDb.
Image description:
1. Ann and Henry lean into a kiss. They are both smiling. Ann holds a bouquet of flowers, while Hnery has a helmet on.
2. The film’s poster shows Ann and Henry dancing against a tidal wave in a storm. They are fully dressed.