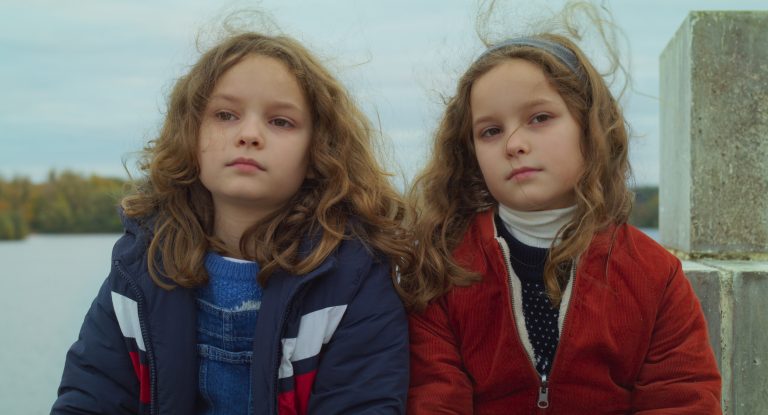 During her brief press stay in London, The F-Word met with none other than Céline Sciamma to discuss her upcoming film Petite Maman. Ask any queer film geek about Céline Sciamma, and they will start raving. She’s a big deal. So getting to interview her must be in my top five pinch me moments.

The French filmmaker behind Water Lilies, Tomboy, Girlhood and Portrait of a Lady on Fire, to mention but a few, is a master act in exploring both queer and female gaze. Her films tackle youth, growth, identity and love with delicacy and intensity alike.

Portrait of a Lady on Fire, the historical tale of a love affair between a painter and her subject, made Sciamma the first woman director to win the Queer Palm at the 2019 Cannes Film Festival. And while I might still be reeling from the impact Portrait of A Lady On Fire had on me when I first watched it, Sciamma’s new film Petite Maman hits cinemas this week.

“When did you decide this would be your next film?” I ask, considering the toll of her recent worldwide tour. In comparison, Petite Maman works its wonder on a more intimate scale.

A grandmother passing away without the family getting a chance to say goodbye. Mourning in isolation. A child playing alone in an empty house. Many of the film’s striking visuals are reminiscent of global lockdown tales

“I decided even before doing Portrait of a Lady on Fire, [when] I was struggling with writing that. It was a film I had given up on many times. This idea of Petite Maman tapping on my brain felt soothing and kind of dangerous,” she ponders. “So I decided: I will do that next. I will land there, eventually. That’s why I was able to write it super fast. And then the pandemic happened and the subject felt so connected to what we were going through. It felt right to put a film in cinemas right as cinemas were reopening.”

Petite Maman tells the story of eight-year-old Nelly (Joséphine Sanz). After her maternal grandmother (Margo Abascal) dies, Nelly moves into her isolated house to help clear it out. Her mother Marion (Nina Meurisse) struggles with the loss and, at one point, goes missing completely. But Nelly meets an unexpected friend in the nearby forest: her mother Marion as an eight-year-old (played by Joséphine’s sister, Gabrielle Sanz).

The dramatic irony is hard to ignore, considering how closely the film mimics the experience of grief throughout the pandemic. A grandmother passing away without the family getting a chance to say goodbye. Mourning in isolation. A child playing alone in an empty house. Many of the film’s striking visuals are reminiscent of global lockdown tales. But there’s sweetness too, strengthened by a cosy autumnal palette and warm sun rays cutting through the dust of the house. Sciamma admits the location didn’t have the brightest foliage when they were filming and credits cinematographer Claire Mathon for the final aesthetic.

As Nelly and her mother drive back from the hospice at the beginning of the film, Nelly leans over from the car’s back seat to feed her mother snacks. The scene stayed with me. We so often focus on the hardships of parenthood that we tend to forget children can be caretakers too, especially when they sense their parents are suffering.

The film’s magic realism is never treated as extraordinary, making the experience of a mother and daughter playing together as 8-year-olds surprisingly relatable. Nelly and Marion immediately bond: they make snacks for one another; they offer each other warm clothes after playing in the mud.

Nelly’s overtly mature caregiving attitude throughout the film made me question the relation between gender and care roles. I ask Sciamma about her reasoning in picking a line of three women and how different the film might have been with a generation of men at the helm.

“From the very start, I considered it a film about this trio of women and about exploring inter-generational care. It’s haunted by my personal question of… Well, I guess I made it everybody’s question… [laughs].

The title makes it sound like it’s literally a film about a mum who’s a baby, but the title represents Nelly too. As you said, children take care of their parents, of their siblings, of their relatives… It’s part of the representation I wanted to explore. The beginning of the film is really naturalistic before this incredible meeting happens. This kid takes care of her mother. There’s sisterhood within generations. This fairytale allows us to abolish the hierarchy and create equality between a mother and daughter.”

This leads to us chatting about casting and the peculiar, although effective, solution to cast two sisters to play Nelly and her mum.

“I didn’t initially consider using real sisters when writing the screenplay,” Sciamma reveals. “I changed my mind when we started casting. It wasn’t because I wanted them to look alike necessarily, but because I wanted the audience to be absolutely sure that these characters were going through the exact same moment of their life. It’s also an ethic of work because keeping it to one family would make the actors comfortable. They could really be safe together – the risk they were taking, they were taking it together. When you’re working with kids you should be very careful in regards to the environment you’re creating on set.”

And to my question of whether she was nervous about entering sci-fi territory with this time-travelling premise, Sciamma admits to unconsciously fighting against the fantastical aspect for quite a while. “I kept thinking – it is a time-travelling film, I have to address it,” she says. “But I ended up writing it very candidly. I addressed the problem of time travelling through dialogue.” “Working around time is, for me, working around building memories. Films are building new memories. And this one is about a common childhood shared by a mother and a daughter. All films are an architecture of time” (Céline Sciamma)

In a scene where Marion asks Nelly if she’s from the future, Nelly earnestly replies that she’s from ‘over there’, meaning the grandmother’s house. There’s a lightness to the ordeal that plays against the audience’s expectations of the genre.

“I was finding simple solutions,” Sciamma continues. “Nothing complicated. The magical element was an opportunity, but its impact is real. It’s all about the impact. Through this narrative, the audience has a device to picture what it would be like to meet their parents as kids. It could be soothing and therapeutic, in the same way it is for Nelly.”

And in thinking about the film alongside the rest of her filmography, time-travelling is actually a recurring theme, in a way.

“When I realised that I wasn’t thinking of the film as a sci-fi, it’s really because all films are about time travelling. Editing is always time travelling. I’m obsessed with the concept of time. Portrait of a Lady on Fire is constructed as one long flashback. You are always aware that this has already happened. It’s all a memory. Working around time is, for me, working around building memories. Films are building new memories. And this one is about a common childhood shared by a mother and a daughter. All films are an architecture of time.”

I leave Sciamma with a question about feminism in film and whether she feels it’s any easier to get these stories on the big screen.

“In France we have a specific system where cinema is supported by public money,” she says. “We always had a greater number of women directors. But the budgets’ constraints and the glass ceilings throughout those women’s careers… Those are stable. I’ll say it feels less lonely than fifteen years ago. Feminism is discussed more. You can’t avoid it, but it comes with resistance and backlash. We’re making progress. We can’t be stopped but we can be slowed.”

Petite Maman is in cinemas from 19th November.

Images courtesy of organic pr.
Image description:
1. Nelly and child Marion sit side by side. They appear eerily similar. One wears a blue jacket, the other a red jacket. A strong wind makes their hair fly.
2. A portrait of Sciamma on location. She sits on a bed, facing the camera.
3. A still from the film framed as Sciamma’s portrait from above. Nelly is on the bed, looking into the distance. Above here, morning light reflects on the wallpaper.
4. Nelly and child Marion appear happy and smiling as they bake.