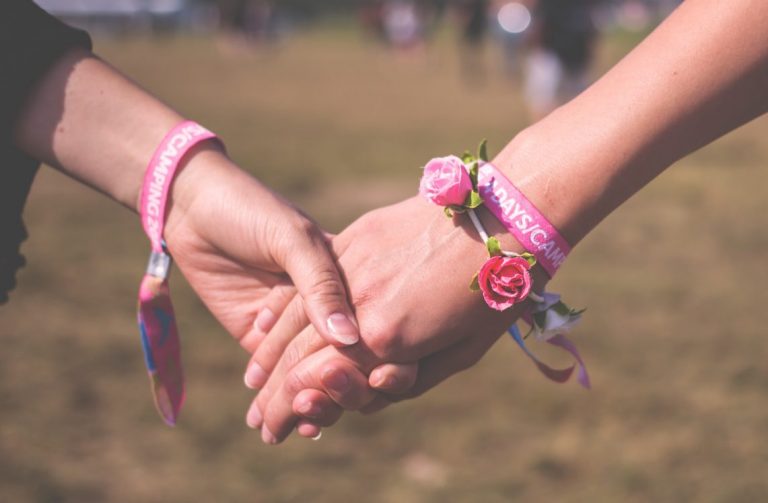 The fetishisation or hyper-sexualisation of lesbians and queer women

The early noughties were a pivotal, exciting, slightly cringy at best and shockingly offensive at worst time for lesbian representation in the media.

In 2002, Russian music duo t.A.T.u. released their controversial ‘All The Things She Said’ video, treating daytime TV watchers to three-and-a-half minutes of sheer lesbian schoolgirl fantasy. In 2003, the world (and Justin Timberlake) came together in a moment of shock, horror and delight as Britney and Madonna shared a kiss live on stage at the MTV Video Music Awards.

In the fictional world, The L Word’s radical portrayal of an all lesbian and bi women friendship group introduced the public to a novel experience of women’s same-sex dramas and intimacies. And, perhaps offering an antidote to a pop culture saturated in hyper-sexualisation, The Ellen DeGeneres Show willed the figure of the goofy, more palatable lesbian into the nuclear family’s once-impenetrable home.

Firstly, I want to acknowledge that despite the obvious problems with some of these earlier cultural depictions of lesbianism, I believe that they occupy an important position in LGBTQIA+ history. Public displays of queerness in TV, film and music, regardless of whether they were performed by straight women or not, were seminal moments of positive representation for me as a young, closeted gay.

The boundaries between sexually liberating and gratuitous or even pornographic depictions (particularly in the case of the underage girls of t.A.T.u.) were perhaps more blurred and less policed than they are now. However, watching two widely celebrated, attractive and accomplished pop icons engage in bisexual activity was more validating to me than squirming through film scenes featuring a suggestively paedophilic lesbian PE teacher. And, of course, better than not seeing myself represented on TV at all.

The fetishisation of same-sex attraction affects the lived, everyday experience of queer women. It makes us stop and look around before we kiss our partner goodbye in public. It makes our hands fall to our sides when a man passes us by in a quiet street. And, worst of all, it gives men the confidence to loudly proposition us for threesomes in a threatening, sneering manner

This is not to say that instances of ‘queer-baiting’ and kissing-to-get-attention-from-men are acceptable. In 2021 we can and must do better with our wlw (women loving women) representation.

The fetishisation of same-sex attraction affects the lived, everyday experience of queer women. It makes us stop and look around before we kiss our partner goodbye in public. It makes our hands fall to our sides when a man passes us by in a quiet street. And, worst of all, it gives men the confidence to loudly proposition us for threesomes in a threatening, sneering manner.

If we frame instances of women kissing each other on physical stages in a fetishistic way, we suggest that lesbian affection belongs on a metaphorical stage. It exists for, and is continually fuelled by, the straight male gaze. It is to be performed in public and is dependent upon spectatorship for its very existence. When two straight girls pointedly kiss in the middle of a club dancefloor to get free drinks, it incentivises men to stare, cheer and ask to ‘join in’ when I kiss my girlfriend. A response that ranges from being tedious and irritating in some instances to extremely jarring and menacing in others.

Not that I am suggesting, however, that the threatening behaviours of men are the fault of, predominantly, very young girls. In fact, ‘compulsory bisexuality’ – such as being pressured to perform bisexual acts to gratify men – has been found to be steadily increasing, particularly in university settings. These encounters range from women being encouraged to kiss in front of male audiences in bars, to more extreme instances of women being pressured into having threesomes initiated by their male partners. In both cases, women have not been granted the freedom to explore same-sex attraction on their own terms or for their own pleasure.

On a more sinister level, it also shows that the fetishisation of same-sex attraction is jeopardising the safety of both queer and straight women.

Being fetishised is not the same as being accepted. Having your identity and relationships judged by what is deemed sexually appealing to those outside of it is not a celebration of queerness

These examples of compulsory bisexuality do not translate into positive shifts in societal attitudes towards bisexuality, either. Author and gender studies professor Breanne Fahs suggests that this trend has not equated to a greater identification with bisexuality, or an increased sense of acceptance as part of the LGBTQIA+ community. Because, ultimately, being fetishised is not the same as being accepted. Having your identity and relationships judged by what is deemed sexually appealing to those outside of it is not a celebration of queerness.

And these issues do not go away within the LGBTQIA+ community either. Just as the community has real problems with racism and transphobia, there are evident cases of misogyny within supposedly ‘queer-friendly’ settings.

I have strolled into a gay bar in Leeds city centre and been told by the male staff behind the bar that “we don’t want any vagina in here”. I have waited half an hour to be served a £12 drink in a relatively quiet club in London because any and every man has been served before me. I have never been made to feel unwelcome in G-A-Y Manchester until I went without my attractive male gay friend, when I was promptly told, “This is a gay bar, you know.” I know – girls can be gay too.

Being referred to by men simply as “vagina” is pretty grim in any context, regardless of whether the man in question is attracted to vaginas or not. It serves as a reminder that our bodies are constantly being sexualised, both ‘positively’ and negatively. I had been in that bar for less than ten seconds and had said nothing before my body was judged and deemed unappealing by a man. I granted him his wish and left rather speedily.

The complexities of women’s bodies, relationships and intimacies are lost when they are seen in solely sexual terms. It does not matter if they are being construed as ‘attractive’ or ‘repulsive’

Being rude about women and more specifically female bodies and genitalia is rife and, worryingly, often given a free pass among gay, cis men. Recently I learnt that not only is it possible to be a ‘gold star gay’ (a gay man who has never had sex with a woman), but a ‘platinum star gay’. This is when a gay man was born via C-section and, therefore, has never touched a vagina, ever.

Not only does this reward system completely disregard any form of bisexual identity or experience, it is both deeply misogynistic and transphobic. It equates gender with genitals, suggesting that someone is no longer gay for having sex with any trans, non-binary or gender-non-conforming individual. It also implies that genitals belonging to anyone other than a cis man are inherently repulsive, which seems like a strange and harmful thing to be celebrating so publicly.

Ultimately, the complexities of women’s bodies, relationships and intimacies are lost when they are seen in solely sexual terms. It does not matter if they are being construed as ‘attractive’ or ‘repulsive’ because either way, they are still only being understood within the framework of cis men and their preferences. Lesbians and queer women do not need men to confirm their attractiveness for their relationships to be real and valid – that’s sort of the whole point.

Image description: Two women holding hands outside on a sunny day. The photo is cropped so that only their arms are visible, and the background is out of focus. They both have pink festival bands on their wrists, and the words ‘days/camping’ are written on them. the woman on the right is wearing a bracelet of pink flowers. Image used with permission, courtesy of @freestocks via Unsplash