Want to find out more about the editorial team behind The F-Word? Then read on! If you want to see a full list of contributors, this is the place you need to click.

The editorship of The F-Word has been rotated between our editorial team since 2013. The editorship is currently being shared by Lissy Lovett and Jenny Williamson and their term started in January 2022. The previous rotating editors have been Genevieve Richardson, Lusana Taylor, Lissy Lovett, Joanna Whitehead, Holly Combe, Ania Ostrowska, Megan Stodel and Helen G. To read about the history of the site before 2013, please see this post from previous editor Jess McCabe, along with this one from site founder Catherine Redfern.

More about the people behind The F-Word: Q: How many feminists does it take to change a lightbulb?
A: That’s not funny!

From time to time she tweets @lissylovett. Jenny has been a feminist since the moment a savvy teacher pressed a copy of Eve Was Framed into her teenage hands. Today, having just about recovered from a decade-long professional detour into accountancy, she’s a freelance writer, editor and proofreader. Her idea of a cracking Friday night is a cinematic double-bill of a Ruth Bader Ginsburg documentary and The Princess Bride. Genevieve Richardson works in Parliament and does freelance writing on the side. Her enthusiasm for feminism was firmly cemented during her master’s degree in Development Studies. There, she also set up a feminist book club and ran sexual consent workshops for new graduate students. She was the features editor from 2018 – 2020 and the rotating editor from 2020 – 2022. Lusana’s feminist awakening came by way of Bikini Kill and The Beauty Myth.

When she’s not working as an editor for an independent fiction publisher, she’s probably taking photos of her cat. Alessia Galatini is a London-based writer, screenwriter and film critic. She has a slightly unhealthy obsession for fictional characters and TV shows (that’s how she learnt about most things in life really). She believes in the power of media to shape the way we see the world. She has a soft spot for mythology, LGBT love stories and characters that raise issues of gender and identity. Some of her favourite creative minds include Margaret Atwood, Jeanette Winterson, Jordan Peele, Diablo Cody, Angela Robinson and Shonda Rhimes.

She has a BA in Creative Writing and an MA in Screenwriting from London College of Communication. She also really likes penguins. You can follow her on Instagram @alessiagalatini. 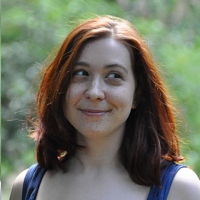 Jess edited The F-Word from February 2007 to May 2013. You might still see her name pop up on the site, if she gets herself together to write the occasional blog post, feature or review.

Jess makes a living as a reporter, currently covering a beat that includes social housing and environmental issues. She lives in South London with one bloke and two gigantic cats. Find her on Twitter @jester, or on Tumblr. Holly Combe has been a feminist for as long as she can remember but became active when she joined Feminists Against Censorship (FAC). She started reading and contributing to The F-Word in 2002 after receiving an e-mail about the site in a Yahoo group she took part in at the time. She joined the blog at its inception in 2005, which led to her being part of the blogging collective that emerged in 2008 to help run the site. She also has The F-Word to thank for kickstarting her editing career: this began back in 2011, when she became co-editor of the music section with Cazz Blase (a role she briefly held on her own in 2013 and then shared with Joanna Whitehead until 2015). She went on to take over from Mathilda Gregory as the sole editor of the TV section in 2013, continuing until 2016, when she took on the position of rotating editor for a year.

Holly has had writing published in a number of other outlets including Yahoo!, STUDIO magazine, Economic Issues, Scarlet magazine, The Guardian, The Fresh Outlook, The New Statesman, Bookslut, Girlchick and The Oxford Mail. She mainly works as a copy editor, but you can sometimes catch her taking part in radio debates or DJ’ing. She has a degree in Performance Writing and an MA in Applied Social Research. 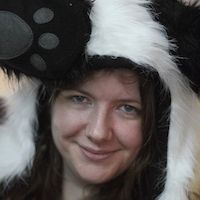 D H Kelly had written occasionally for The F-Word before becoming a permanent blogger in 2014 and the features editor from 2015 to 2016. She also blogs at Diary of a Goldfish, where she founded the annual Blogging Against Disablism Day.

She also paints portraits, writes novels and is nearly fluent in the invented language, toki pona. Catherine Redfern founded The F-Word and was editor from 2001-2007. She is from Tameside, Manchester and has been living in London for about ten years, much to her parents’ annoyance. She is co-author, with Kristin Aune, of Reclaiming The F Word: The New Feminist Movement, a book about the resurgence and reclamation of feminism over the last ten years, today’s issues and today’s feminist activism.

The book was published in June 2010 by Zed Books. She hangs out @cathredfern and has various craft obsessions which she blogs about on her infrequently updated, unprofessional, low-key personal blog. 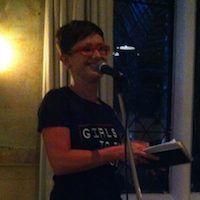 Polish-British post-communist feminist, Ania Ostrowska moved to London in 2005 and has been involved with The F-Word since 2011. She was a Film (and sometimes TV) Editor (2011-2019), the blog’s Rotating Editor 2015/16 and is currently providing editorial help and occasionally blogging about women in film.

With her fingers in too many pies, she also has a PhD in Film from University of Southampton (having researched contemporary women documentarians working in the UK) and works as a freelance film journalist and programmer. Find her on Twitter (representing herself only) @ostrutka.

Fliss was introduced to the concept of feminism through raiding her mum’s bookshelf for non-fiction as a precocious 10-year-old. She follows an intersectional approach that focuses on social justice and equity for all.

By day she works in comms for a large national charity, by night she reads, watches trash TV with her flatmate and continues her ongoing struggle to finish all the crafting projects she’s started. You can follow her on Twitter at @FAAlmaWrites.

Originally from Manchester, Leah lives in London and worked as a literature programmer before joining a human rights charity that supports writers and artists. She occasionally writes fiction and likes to read books written by women.

Olivia is from Edinburgh and lives in Berlin. Cleo Hopkin-King is a linguistics graduate with an avid interest in the intersection between language, gender and sexuality. She also enjoys reading psychological thrillers, roller skating, and being a mum to three rats.

Connie is an MA Communications and Media graduate and aspiring journalist with particular interested in politics, sex positivity and digital feminism. In her spare time she enjoys life drawing and adding to her bookshelf, and has a particular love for authors Sara Baume, Chimamanda Ngozi Adichie and Bernardine Evaristo. Laurie Cummins is an interdisciplinary creative producer, curator and writer based in Leeds. She works in contemporary art and performance and loves comedy, fiction and terrible films.