Think feminists have a bad rep today? Well it was just as bad, if not worse, in the Seventies. But back then they were called women’s libbers, and somebody must have been feeling threatened, because in 1975 the Mandy annual for Girls ran a story about one of them. I think it’s a fascinating example of how feminists were viewed, and how the writers tried to influence the young readers’ opinions against feminists.

Hey, I wasn’t even born then! All I know is that whenever I go back home to visit and stay in my old room, I go through the ritual of browsing through the bookcase next to my bed and reacquainting myself with all the books I love. Last time I went back I progressed past the Mallory Towers and science-fiction to discover a stack of girls annuals. All the big names were there: Bunty, Judy, Princess, Diana, and Mandy. Oooh, it was nostalgic! I had a great time sprawled on the bed reading the picture stories…

Anyway, then I came across a story called ‘The Farmer Wants a Wife.’ Remember that old song?

Notice how the husband’s job is a farmer: but the woman’s job is simply to be a wife. Hmmm… anyway, I’m getting sidetracked. On with the story!

Sue and Helen are the daughters of a farmer; a widower. And just like that kid in Sleepless in Seattle, they’re obsessed with finding their father a wife. Understandably, the girls are choosy. As the story puts it: “the prospective wife had to make an ideal step-mother, as well as being useful on Dad’s small farm. Young women with these qualifications were hard to come by, but the girls never gave up trying!”

One day, Sue and Helen noticed someone driving a lorry up to the farm. “Must be that new pig-feed I ordered” says father, before asking the sprightly lorry driver: “Can you give me a hand with the unloading, lad? There’s no one else here but my two daughters.” The young ‘lad’ turns out to be a good worker, and father says so as they offer the helpful lad a cup of tea. 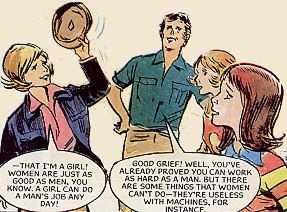 But wait! The stranger has something to say: “Oh dear – it always seems to end up like this! I feel the time has come to tell you -” – the ‘boy’ whisks off ‘his’ flat cap – “that I’m a girl! Women are just as good as men, you know. A girl can do a man’s job any day!” 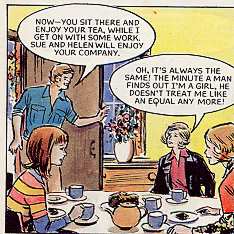 Here she is: the trickster, the feminist: all the time she’d been hiding her bobbed hair under a hat! But who can blame the farmer for being mistaken? After all, she is wearing a black leather jacket, and trousers. Father is shocked, to say the least. “Good grief!” He exclaims. “Well, you’ve already proved you can work as hard as a man. But there are some things women can’t do – they’re useless with machines, for instance.” With that assertion he leaves the women in the kitchen to drink tea while he gets on with some work. “Oh, it’s always the same!” Grumbles the blonde-haired visitor. “The minute a man finds out I’m a girl, he doesn’t treat me like an equal anymore!” 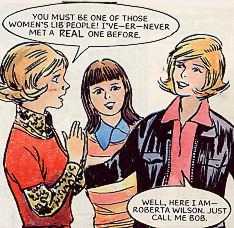 The girls are awestruck and very impressed. “You must be one of those women’s lib people! I’ve – er – never met a real one before.” splutters Sue with a mixture of fear and curiosity. Here she is, the mysterious women’s libber! Driving a truck, working on farms, heaving huge sacks around! Impressive. She introduces herself. “Here I am – Roberta Wilson. Just call me Bob.”

Already the feminist’s character has been established. She dresses like a man, she acts like a man, she even disguises herself as a man. And she has one almighty chip on her shoulder. All she wants is to be seen as an equal – to do anything men can do. Suddenly the farmer rushes in shouting that there’s something wrong with the truck. It’s Bob to the rescue! “Let me see it Mr Harrow. I’m quite at home under the bonnet of a car.” 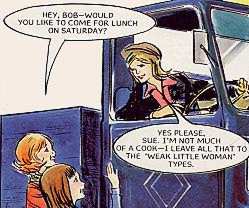 Of course, Bob fixes the truck and allows herself a smug smile. “I think your father has realised I’m as good as any man, girls.” Sue and Helen exchange excited glances. She’s the woman for their father, alright! Before she can leave their lives forever they invite her for lunch on Saturday. Bob seems pleased. “Yes please, Sue.” She says, leaning out of the window of her truck, cap back on again. “I’m not much of a cook – I leave all that to the ‘weak little woman’ types.”

The first suggestion that something’s not quite right with Bob. She despises cooking and all things traditionally female. They’re for the ‘weak little woman’ types. She seems to despise those weak little women too. Any woman who can’t do the macho stuff she does is just not up to scratch: she’s just pathetic.

This is confirmed on Saturday when Bob arrives for lunch on her motorbike. But before lunch she has some work to do stacking sacks of potatoes in the barn. Bob gestures to Sue and Helen, both wearing teensy mini skirts. “Come on, you two! How about showing your father that you’re as useful as a couple of sons would have been? What a disappointment it must be for a farmer to have girls instead of boys.”

Sue and Helen do their best, but just can’t lift the sacks as well as Bob. Bob shouts at them for being clumsy as Sue scatters potatoes across the floor, causing her father to trip. He boots them out of the barn, leaving Bob smirking. 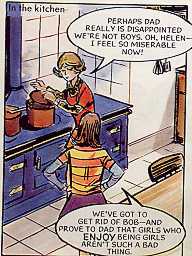 The awful truth dawns on Sue and Helen. Bob seemed great to begin with, but in reality she’s just a real bitch, and she disapproves of the girls. “We’ve got to get rid of Bob” says Helen, back in the kitchen as the girls prepare dinner. ” – and prove to Dad that girls who enjoy being girls aren’t such a bad thing.” They form a cunning plan. The tables will be turned. Dad shouts at us for being girly: so lets show him what life would be like if we did act like Bob…

Sue and Helen emerge into the kitchen transformed. Instead of their blouses they’re wearing thick polo neck pullovers… instead of the mini skirts, trousers of course, and to finish the look, huge heavy work boots. “Why are you dressed like a couple of scarecrows?” their father asks. “I want to be called Sam from now on” says Sue, ” – and Helen’s changing to Len. We’re as good as any boys – just like Bob is.”

Their father is bemused, but he has other things on his mind. “Well, how about some lunch Helen? Er – I mean, Len?”

“Help yourselves,” says ‘Len.’ “It’s cooked. We may as well drop all that nonsense of serving it out. It’s just a waste of time.” They sit at the table with the saucepans plonked on top instead of serving dishes. Bob complements the girls on their stew and suggests they join the army as chefs when they leave school. “Oh no!” says their father. “Helen always talks about being a model, and Sue would like to be a fashion designer.” 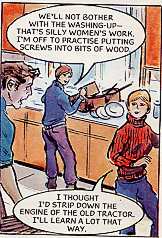 “We’ve shelved all that now, Dad. I’m going to serve my time as a motor mechanic, and Len’s keen on being a carpenter. If boys can do these things – so can we.” The meal is over, but ‘Len’ and ‘Sam’ aren’t bothering with the washing up: “That’s silly women’s work. I’m off to practice putting screws into bits of wood.” ‘Sam’ proceedes to strip down the old tractor engine – on the kitchen table!

Their father is getting more and more irate. “Isn’t it time someone tidied up around here?” He shouts. “I’ve never seen the place in such a mess!” Er – well why don’t you tidy up for once Mr farmer, sir? But he’s spotted something else: “It can’t be – it is!” He lifts up an oil-stained rag in disbelief. “This is my best shirt! I left it out for you to wash!” Whoops! “I must have used it to wipe the valves! Sorry Dad!”

This is the last straw. The farmer doesn’t seem to mind the girls trying out boy stuff, but when their domestic duties are neglected, he gets angry. He turns on Bob, pointing agressively. “Everything was fine around here until you came along. Now the place is in chaos, and my two lovely daughters have decided to become boys – and a more useless pair of boys I’ve never met!” Bob is outraged. She stands shouting, hands on hips. “OH? Well, I can see that all you want around here is a slave! I’m going!”

As Bob storms out slamming the door behind her, the girls can feel satisfied that their plan worked. As Helen’s home-made shelf collapses from the kitchen wall, she says she think she’ll go back to her old ambition of modelling. Sue promises to move the tractor engine from the kitchen table. Ahhh…. back to normal! 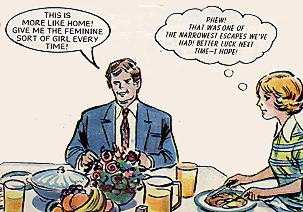 The final scene shows the three sat around the table. What a lovely family scene: the father in shirt and tie, the girls in pretty flowery dresses… there is a vase of flowers and a tablecloth on the table. Things are back to normal, and their father is obviously relieved. “This is more like home!” He comments, grinning. His final words: “Give me the feminine sort of girl every time!”

Sue and Helen exchange glances. “Phew! That was one of the narrowest escapes we’ve had!” thinks Sue. “Better luck next time – I hope!”

So what message is the story trying to send out? Well, the image of a women’s libber is interesting. At first impressions the girls are in awe. Bob can do anything as good as a man – but this means she can’t cook, and doesn’t want to cook or do anything remotely traditionally female. All she cares about is being like a man. But it’s not just being as good as a man, she seems to want to be one. She calls herself a man’s name, dresses like a man, even talks like one. She’s like the traditional stereotype of a feminist, who despises everything feminine and rejects any traditionally female activities.

This intimidates the girls as Bob does not respect them and gloats over their inability to lift heavy sacks. Bob is certainly out for herself; sisterhood is meaningless to her: all she cares about is proving herself better than all the other ‘weak little woman’ types.

On the one hand, the story validates feminism by proving that some women can be as good as men. It certainly proves that Bob can fix an engine or lift heavy loads. It points out the farmer’s old-fashioned and sexist attitudes when he comments that women are ‘useless with machines’ and then is spectacularly proved wrong. But even as the story validates the basic theories of feminism, it trashes the feminist herself. It’s the same old story: feminism tolerable (we suppose): feminist evil.

The moral of the story seems to be: isn’t all this feminism stuff silly? Who’d want to be like a man when they can be lovely pretty girls? Some women may be able to be as good as men: but they’re nasty and, well, freaks. In the words of the father: “Give me the feminine sort of girl every time!”