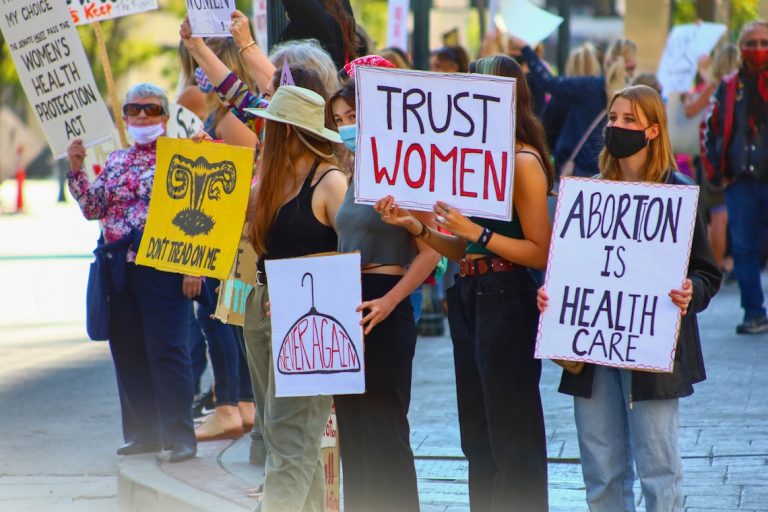 As the US Supreme Court prepares to hear oral arguments in the most significant abortion case in decades, a report by Population Matters has revealed a growing number of countries are adopting coercive pronatal policies in a bid to make people have more children.

Released today, the report Welcome to Gilead – which invokes the pronatal dystopia of Margaret Atwood’s The Handmaid’s Tale – identifies a direct link between the use of pronatalist policies and the stripping back of reproductive rights.

Earlier this year, former US Vice President Mike Pence told a summit in Budapest that “plummeting birth rates” represent “a crisis that strikes at the very heart of civilisation”, adding that he hoped the US Supreme Court would overturn the landmark Roe vs Wade abortion ruling. In parallel, earlier this year the Texas state government introduced a law that not only criminalised abortion past six weeks, but gave people the right to sue doctors who perform abortions after six weeks.

Population Matters Policy Adviser Monica Scigliano, who wrote the report, said: “When people think of coercive population policy, their minds often go to examples like China and India, in which leaders wanted to limit population growth by forcing women to have fewer children. Now, however, with birth rates declining and in some cases, emigration reversing population trends, that has changed.

“As people continue to choose smaller families, more governments across the world are resorting to coercive tactics, depriving people of their reproductive rights in order to increase their populations.”

China is among the 28% of countries globally whose governments have now implemented pronatalist policies – up from 10% in the 1970s. There, the government’s economic and ethno-nationalist motivations intertwine as they set the concerning goal of “upgrading population quality” in the face of declining birth rates. Simultaneously, the government continues to subject Uighur Muslims to forced abortions, sterilisations and long-term contraceptives.

Pronatalism, however, is not just becoming prevalent in the US and China. In Iran, the government has declared its concerns about declining birth rates among the Shia population – the dominant Islamic branch in the country. Iran’s government, therefore, frames population goals as imperative to national identity and security, invoking the threat of a Western conspiracy to diminish Iran’s power by bringing down birth rates. Recent reforms in Iran have outlawed sterilisation and banned free birth control.

Leadership in countries such as Hungary and Poland across Eastern Europe have appeared to subscribe to the “Great Replacement” conspiracy theory: that Christian and European culture and civilisation will be extinguished by immigration from Muslim countries and high birth rates among immigrants. Hungary’s far-right populist president, Viktor Orbán, has stated on record “we want Hungarian children. Migration for us is surrender.”

In Poland, large-scale emigration and low rates of fertility have resulted in an ageing population. Politicians, however, have reframed the issue to blame feminist ideology for assaulting the institution of the family. In January 2021, Poland introduced a near-total ban on abortion.

While certain established democracies in Europe might be considered safe havens for reproductive rights, complacency comes with risk. Concerns around economic growth, diminishing birth rates and perceived threats to national identity are already resulting in disruptions to the reproductive rights people enjoy in this part of the world.

For example, Alternative für Deutschland, a right-wing populist party in Germany that holds 82 seats in the German parliament has succeeded in blocking revisions to Nazi-era abortion laws that prohibit medical professionals from publicising abortion information. Italy provides the right to conscientious objection for doctors over abortion, meaning they can refuse to perform them – 68.4% of gynaecologists in Italy identify as conscientious objectors.

Population Matters Director Robin Maynard said: “Coercive pronatalism is not simply a manifestation of patriarchy or misogyny but can be a product of political and economic forces entirely indifferent to women, for whom they exist simply as productive or non-productive wombs.”

“These regimes are instrumentalising women’s bodies to serve nationalistic, economic and patriarchal interests. Violating sexual and reproductive health and rights is never justified. It is imperative we all defend them, wherever they are threatened, and for whatever reason.”

As there is a global threat of oppressive and coercive pronatalist policies, the report underlines the need for campaigners to continue exerting pressure on governments to uphold access to safe reproductive health services.

National and international governments and agencies must be aware of the link between discourses around population decline and the erasure of reproductive rights, and to continue to ensure and advocate for access to sexual and reproductive health.

All data cited is from Welcome to Gilead: pronatalism and the threat to reproductive rights, unless otherwise indicated. To read the full report, visit Population Matters’ website.