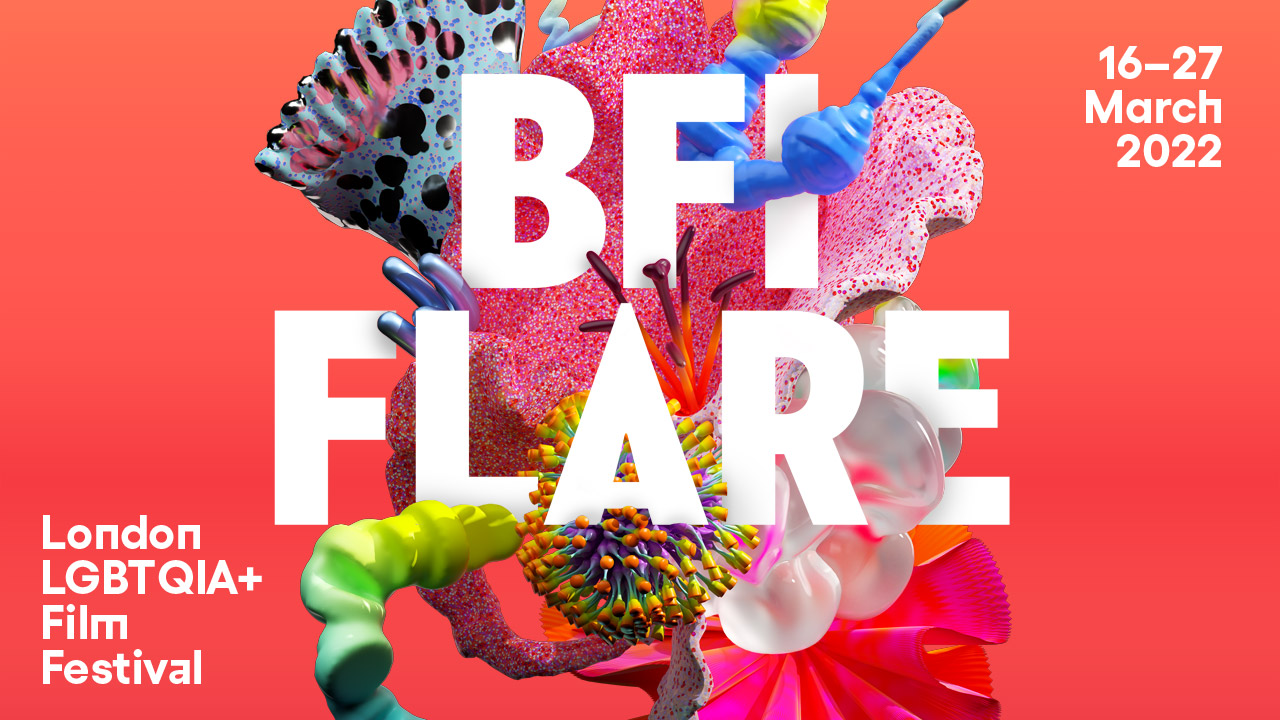 The 36th edition of the BFI Flare LGBTQIA+ Film Festival has come to a close and we look back on some of the most beautiful, original and inspiring films screened this year.

This short documentary chronicles the history of the London chapter of the Sisters of Perpetual Indulgence, a group of gay male activists who donned nun costumes. Framed around celebrating the 30th anniversary of Derek Jarman’s canonisation into sainthood by the Sisters, the nuns look back on their activism, their creativity, their satire and their community. It is remarkable to see the tonal shifts between footage (some archival, some reconstructed) of the nuns in full extravagant costume, juxtaposed with their calm conversation outside of their habits. As their discussions move from the AIDS crisis, to Section 28, to shifts in identity and visibility (one person talks about how proud she is to now be a trans female Sister), there never seems to be a sense that this kind of activism is off-limits, or can only be found preserved in history books –- perhaps it’s a quiet call for this extravagant and radical community to be revived.

This short documentary film is almost entirely composed of the phone calls that trans male musician Nasir makes to his family members, as he comes out to them. The premise is very simple but incredibly effective. The genuine openness and curiosity with which his family accept his identity and show their support are heartwarming, and the banter between Nasir and his family shows that there is an easy comfort between them that is unlikely to change because of Nasir’s coming out. There isn’t much more to say about this short, it’s just very sweet.

In this feature-length documentary, filmmaker Victoria Linares Villegas investigates the history of her second cousin, Caribbean film pioneer Oscar Torres. His memory was all but erased from the family after his death, because of his relationships with men. Linares Villegas uses a variety of storytelling techniques to uncover information about the life of her cousin, while also linking the treatment of his legacy to her own life as a queer woman: how is her life similar to Oscar’s, and how do they differ? Through dramatised readings of correspondences, archive footage, animation, and sound stage re-enactments of Oscar’s scripts, Linares Villegas combines memory and fiction, artefacts and imagination. This is also interspersed with moments where we get to see behind the scenes of the documentary. We see the work that goes into staging scenes under Covid-19 restrictions and the sheer admin that is required to tell stories. Most importantly we see that both the presence and absence of life histories do not come about by chance.

This Is Not Me (Saeed Gholipour)

Saeed Gholipour follows the life of two young trans men, 16-year-old Shervin and 27-year-old Saman, in Iran. Although both have relatively supportive families, Shervin and Saman feel the weight of social and legislative barriers towards their transition. Although people can legally transition in Iran and gender affirmative surgeries are common, the medical and legal hoops that one has to jump through are fraught with bureaucracy and are incredibly expensive. It is the focus on these processes which makes this documentary so interesting –- most Iranian or Iranian-diaspora cinema that becomes popular in the West (Circumstance, A Girl Walks Home Alone At Night, Offside to name a few), tends to focus on social issues like sexism and homophobia. While these stories are of course important to tell, they are perhaps more palatable to a Western audience because they mark Iran as a definitive ‘other’ where bad things happen, as opposed to the West where these problems are supposedly solved. However, the painfulness of a long waiting list for affirmative surgery, the frustration of entering a space and being treated as a gender that you don’t identify with and the anxiety that comes with simple acts like swimming in public, are undeniably similar to the problems that trans people in the West face too. Despite focusing primarily on the barriers to transition, there is plenty of room for positive narratives too, though. Throughout the film, we see the lengths that Shervin and Saman’s families and networks go through to help them and the playfulness with which both address filmmaker Gholipour makes the whole film into an obvious labour of love.

This Sandi Toksvig-narrated documentary is a beautiful ode to the Chelsea-based lesbian club Gateways Club. The interaction of archive material, re-enactments and talking heads sections, paint a beautiful picture of the personal and societal importance of having a space to explore one’s lesbianism. What is particularly intriguing to see are the stories of courtship, hookups and physical intimacy that the club facilitated, epitomised in the eponymous Gateways Grind –- need I explain any further? As the club closed in the mid-80s, all interviewees who relate these stories are now older in age, which is not a perspective that tends to be shown on the big screen too often. Where lesbianism is discussed in the mainstream, it tends to be in the shape of family-friendly puppy love. The alternative is a sexual lesbianism that is young, flirty, and entirely aimed at men. The notion that older women can talk frankly about their connections to other women and the role that sex plays in creating and maintaining these connections, feels like a much-needed disruption of the status quo.

Similar to “It Runs in the Family”, this short fiction film aims to recreate and investigate what it means to imagine intergenerational queer connections. Director Shiva Raichandani stars as Madhav, whose wedding party is interrupted by the surprise arrival of their grandmother. Madhav and their grandmother share their respective experiences of family rejection, gendered expectations and finding love and community despite the odds. The film is visually beautiful, and the cast list functions as a quick who’s who of the queer British Asian community. The story is very sugary, to the point where it almost feels self-indulgent. However, the genuine joy and sense of communal support that every frame is imbued with puts up a mirror to the knee-jerk reaction that self-indulgence is necessarily a bad thing, especially for those whose ‘self’ has been historically maligned: why shouldn’t we indulge in ourselves? We deserve it.

In this comedy short, rapper Sammy mistakenly eats an edible, and has to find a way to flush the drugs out of his body as his friend/colleague Yolanda warns him that their spiteful boss is planning to give him a ‘random’ drugs test. Obviously, this is a premise that is full of slapstick potential, but it’s surprising to see how little the short relies on being carried by this premise alone. While the comedy performances of both the leads and supporting cast are outstanding, we are also treated to beautiful costumes, witty dialogue, and a script that manages to convey the closeness and banter between the two friends in only a thirteen-minute runtime. The film also uses its tone to quickly and effectively tackle more serious subjects like racial profiling and drug stigma, without ever feeling didactic.

A Fox In The Night (Keeran Anwar Blessie)

In this short, protagonist Lewis is charged with the task of picking up something from dealer Daniel, on behalf of a friend. Despite having only brief and interrupted exchanges, Lewis and Daniel get to know each other quickly. Their two contrasting displays of masculinity (Lewis flamboyant and extroverted, Daniel calm and considered) seem to bring out different aspects of their personalities. Throughout the short, we see the two characters, both queer men of colour, interact with characters of a variety of sexualities and ethnicities. The careful balancing of tone, stance, and emotion that each character employs to navigate these interactions is as nuanced as it is heartbreaking.

In this short animation, trans woman Matia talks about her challenging and occasionally violent encounters with prejudice. The short focuses on different aspects of Matia’s life, from her childhood to her coming-out, her dating life, clubbing, and the everyday. In all these settings, it becomes clear that this story could not have been told other than through the medium of animation. The images on screen are never there in lieu of live-action footage, rather they work to complement the story, expressing emotional connections, distress, and transformation, in a way that words and photographic material cannot do. The short was included in the Five Films For Freedom, the Flare’s shorts selection of global cinema that is made freely available each year. It is obvious why this short needed to be included in this selection, because the ability to transcend spoken word is exactly what makes for an accessible, powerful message.

In this Canadian feature-length road film, protagonist Link and his little brother flee from their abusive father when Link finds out that his presumed-dead mother is actually still alive. While on the run, they meet Pasmay, who is two-spirit. As Link has always grown up disconnected from his First Nations heritage, Pasmay teaches him aspects of the Mi’kmaq language and culture, as they travel across Canada to find Link’s mother. It is refreshing to see a large cast of Indigenous characters with different identifications, different life experiences and different views on gender and sexuality. So often minoritised characters can bear the burden of representation, and become flattened as a result, but none of the characters in Wildhood need to be only defined by their gender or sexuality. Rather, their gender and sexuality are actually integrated with their narrative arc. Similarly, because most of the interactions occur between characters who are two-spirit, gay, or staunch allies, the film can explore the nuances of (internalised) homophobia and prejudice through their memories, conversations, and silences, rather than by visually showing it. Having a story about Indigenous young people fleeing abuse that takes the time to show both hardship and the joys of intimacy and connection, truly feels like a step forward for cinema.