Rankin and Bailey Down Under

It’s one of those exhibitions that every review tips as ‘controversial’- part of the ‘sexy’ copy scribbled down whenever the supposedly taboo theme of sex raises its supposedly repressed head. But Rankin & Bailey Down Under, a joint show realised in Rankin’s soft erotica and Bailey’s more clinical black and white vaginal close-up plates, courts controversy for reasons other than the notable lack of fig leaves.

According to the press release, the show addresses ‘the subject of female sexuality head-on’, a curious claim considering the exploitative sexism implied its conception by the artists as ‘a pussy show’. To make matters worse, Rankin’s models have been purposefully captured as though they are engaged in sexual activity with himself and his camera; indeed, the very same press release notes that these images place the viewer firmly within the frame of the photographer’s ‘coital fantasy’. The images, then, and the perspective from which they are viewed, relocate the show firmly within the well-trodden territory of a stereotypical male heterosexuality. Appropriately, Rankin’s photographs, beautiful and seductive as they are, fall within the ranks of stock erotica – smooth and idealised young nymphs writhing before the camera.

The girls, despite their unique characteristics (and the well-marketed presence of Jodie Kidd among the images) are somehow typecast and de-individualised by the power of the image to objectify. There is a lot of emphasis on nipples, lips and mouths, a rehearsal of soft-porn clichés, really, though the lack of anything more explicit than pubic hair allows them to retain a Page Three quality. The viewer is flattered rather than challenged by the attitudes conveyed; the images, placing the viewer in the persona of the male voyeur, say nothing about any real female sexuality. Only the few images that do not rely on full frontal body shots – notably the image of a girl whose open mouth exhibits her charmingly uneven teeth – implies any individuality or real engagement with the reality of the female. Within these formulaic erotic poses, even the chipped nail polish of one model seems only to play into voyeuristic fantasies of adolescent or even pre-pubescent sexuality, rather than revealing the unique materiality of the photographer’s subject.

Bailey, on the other hand, addresses new territory in his images, and in so doing justifies the exhibition’s claim to have broken new ground. Bailey offers images of the vagina in its myriad forms, styles, and states of arousal. They are all close-ups examining only the biological equipment for sex, an excellent contrast with Rankin’s discursively mediated sexuality, and their decontextualisation, paired with Bailey’s use of black and white film, effectively sidesteps the category of hardcore pornography. 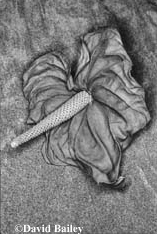 The Bailey images also contrast strongly with the glossy perfection and seductive glamour of Rankin’s erotica. These images are highly alien and alienating, not only in their materiality – appearing moist and slimy, one dark vagina secreting a opaque white fluid, shaven vaginas exhibiting their inadvertent stubble, and others crawling with unruly, spiderlike pubic hair – but also in their very resistance to representation. There is a fascination, paired with repulsion, that accompanies the viewing of these images. Many vaguely resemble dried leather, moist fungi, alien geography or stellar constellations, and Bailey’s complementary works ‘An Oyster’ and ‘A Flower’ explore the universality of this complexity. The vaginas, whether neatly sealed within their outer labia, or stretched open to reveal their folded inner elements, frustrate the desire to see – there is always something not quite seen, a fold that could be drawn back, a recess that could be probed, and, as they strain against the pornography of representation itself, the Bailey images attract a gaze that exposes its own limits. Once again, this creates a productive contrast with the Rankin images which willingly submit themselves to the complacent gaze.

Though I would not quite agree with Bailey’s own categorisation of his work as ‘medical’ (nor, necessarily, with his corresponding categorisation of Rankin’s work as ‘art’), it certainly denies the sexual gaze, snarls the seductive quality of the image up with the unsettling quality of the real, and refuses to provide the gratification of titillation and arousal offered by erotica and pornography respectively. The truly ground breaking nature of Bailey’s work is probably that uneasy pairing of the real and the unreal – the brute corporeality of the vagina, and the inertia, imposed by the subdued black and white hues exposing its mediation by the image. Rankin’s work, on the other hand, buys into the well-established tradition of the hyperreal – the unreal, posed model in simulated motion glossed over by a second layer of unreality, the very gloss of the photograph.

Together, these images expose the stark contrast between our attitudes to social and biological sex – the former sexualised; the latter deeply alienated. The exhibition highlights an important tension in its simultaneous exposure of the easy consumption of commodified femininity by the cultural gaze, and the contrasting deep cultural reluctance and silence surrounding female sexual materiality. And that is, in fact, the real controversy broached by this exhibition: its exposure – perhaps inadvertently – of the absence of any authentic female sexuality from our cultural vocabulary.

The “A Flower” image reproduced here, and more images from the exhibition, can be seen at

Tamlyn Monson is a South African writer and migrant labourer in London.