Where is the F word not an F word?

“The greatest F word in the world deserves a fucking shout!”

So read one woman’s home made T-shirt at the March for Women’s Lives, which I attended in Washington DC on Sunday April 25th, along with over a million other feminists who had traveled from all over the US to stand up for a woman’s right to choose. My own T-shirt was less original – a Ms Magazine ‘This Is What A Feminist Looks Like’ classic – but I was excited to see not only how many hundreds of people, of both genders, were proudly wearing their feminism on their chests by marching in the same T-shirt, but also just exactly what US feminists do look like: a more diverse lot of people I have never seen in my life.

Not only was the crowd more racially diverse than any group I could possibly imagine Britain conjuring up under the label of ‘feminists’, but it was estimated that one third of the marchers were under twenty-five years old, and the mutual warmth and admiration which so clearly existed between the second and third wave generations of feminists was enough to bring tears to the eyes of anyone who has ever dared to hope for the reinvigoration of feminist activism on a scale to rival the seventies. Pink-haired rock chicks marched alongside gray-haired lesbian couples, linking arms with working class parents, chanting in unison with Muslim, Christian and Jewish communities, sharing banners with sex workers, teenagers, transvestites, multi-generational families and even a few ‘dogs for choice’. It was like witnessing the real-life materialization of an idealistic post-modern textbook vision of what the 21st century feminist movement should look like. 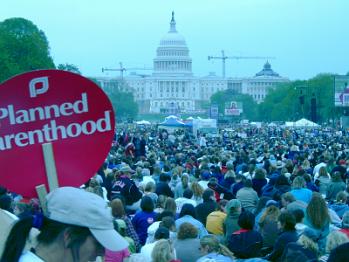 Since moving to New York from London three months ago I have gradually begun to realize that, in this city at least, the F word need not be whispered. Growing up in the UK, it took me twenty-two long years to feel secure enough to adopt the feminist label, and even then I was always on my guard, prepared for the usual assumption that I was a bit odd. While living in London last year, I became accustomed to the bewildered responses I got whenever I told anyone I was doing a degree in Gender Studies; one girl actually thought I was taking a course in “how to make relationships work”. So you can imagine my surprise when I expressed excitement at meeting a fellow gender student at the New York strip club where I now work, only to find that she was the one who seemed confused: “But a lot of people study that around here.” With the British thirdwave movement only just beginning to take off and young feminists still fighting a tough battle against feminism’s negative image in the UK, I had grown accustomed to turning to US magazines such as Bitch and Bust for the majority of my feminist media, so I was already well aware that certain US cities are ‘where it’s at’ as far as contemporary feminism’s concerned. Even so, I wasn’t prepared for the overwhelmingly positive responses I regularly get from seemingly normal people around here when I dare to speak the not-so-dreaded F word.

In my experience, not only are Americans less hostile than Brits towards the concept of feminism and more likely to agree that it is both relevant and necessary in the lives of young people today, but people over here also seem less bogged down in traditional gendered behavior. For a start, American macho culture is less pervasive and didactic than British ‘laddism’. Perhaps this is because British masculinity is rooted in a number of longstanding traditions, such as watching football and going down the pub, so Brits tend to get defensive at the suggestion that there might be other ways to ‘be a man’ (witness the national outcry when The Sun‘s page 3 was criticised last year).

In contrast, since the US is made up of hundreds of different cultures and traditions, people here seem more open to the concept of doing things differently and, as a result, new ideas and ‘ways of being’ are accepted and incorporated into the system faster than they are on the other side of the Atlantic. While sexual harassment is still a depressing fact of life, American offenders tend to be less aggressive than their British counterparts and more likely to apologize if you let them know they’ve upset you. Similarly, progressive gender and racial politics appear to have had more impact on mainstream left wing ideology over here than in the UK, where political activism is still all too often the domain of the angry white man. At the New York anti-war protest in March, I was pleasantly surprised to note that, unlike the testosterone-heavy anti-war marches I’ve been to in London, there were no derogatory jokes about Bush and Blair being gay lovers, Blair being Bush’s ‘whore’ or Bush being another word for cunt. Although there are many many things I miss about my native country, it is quite refreshing to live in a place where standing up for women’s rights is considered normal or even admirable, rather than freakish.

However, in all my newfound patriotic fervor, I sometimes have to stop and remind myself that, in little old Britain, abortion rights are (touch wood) safe enough not to require marching en masse. Perhaps I shouldn’t be quite so hasty to dismiss my own country of origin and pledge allegiance to a country where grand scale mobilization of feminists is, let’s face it, pretty goddamn necessary. As well as threatening to reverse Roe v Wade, the current political administration has slashed funding for Violence Against Women programs, eliminated the Equal Pay Initiative and is currently in the process of attempting to block access to over-the-counter emergency contraception. The influence which Christian fundamentalists have over American politicians is truly frightening and the recent splurge of government spending on abstinence-only sex education in schools would surely not be tolerated in the UK. Moreover, I have to admit to basing most of my analysis of ‘American culture’ on my experience of living in New York, which is hardly representative of the country as a whole. The US is a country of extremes, and while coastal havens like New York and San Francisco are certainly more socially progressive than anywhere in Britain, other parts of the country lag far behind. Until last year, sodomy was prohibited in certain states, and it is still illegal to sell sex toys in some parts of the country. Hollywood still sets the increasingly unrealistic and damaging beauty standards for women all over the world and, to top it all off, the latest TV hit over here is ‘The Swan’, a reality ‘makeover’ show where a number of average looking women undergo extensive cosmetic surgery in order to compete in a beauty pageant. Although I have to admit to being slightly out of touch with British pop culture, I don’t believe we’ve stooped quite that low yet, have we?

In the end, I guess it comes down to the fact that the US is a hugely complex country which, in many ways, defies definition or categorization. After four months as an immigrant, I still tend to panic when I think outside New York, and sometimes I like to imagine that the city is just a long-lost corner of the UK. On the other hand, the experience of being part of a majority female, 100% feminist crowd of over a million, marching, crying and laughing together in Washington DC last month made me think differently about America as a country and about the passionate potential of angry Americans. While it is probably more sensible to favor a society where basic women’s rights are more or less guaranteed, even if it means feminism is viewed as archaic, rather than a country run by a misogynistic madman who is threatening to throw us back to the dark ages, the government’s blatant war on women has got people in this country so riled up that they’re shouting the F word as if it had never been taboo. And although we are all adamant that we will NOT have to march for abortion rights again, the fact that this current threat has breathed new life into a movement which some have claimed is dead must surely mean that we will continue to unite on other feminist issues and keep on marching. Whatever happens, the next time somebody dares to mock our political beliefs, we can all proudly boast that the biggest march ever in US history was a feminist march.